Prime Minister-elect Narendra Modi has held a victory parade in New Delhi following his election win on Friday. The election of the Hindu nationalist leader marks a change of course in Indian politics. 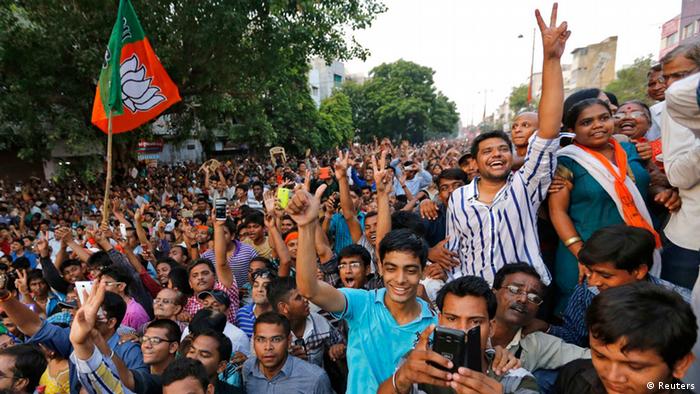 Modi was greeted by large and jubilant crowds in New Delhi on Saturday. The streets were lined with people on either side of his motorcade as he wound through the city.

At one point, Modi stood in an open car door and waved at his admirers as the car slowly continued forward, flanked by police on all sides.

"To run the government, it is our responsibility to take everyone along," Modi said the day before at a victory rally in his home constituency of Vadodara in Gujarat. "I want to take all of you with me to take this country forward."

Modi ran on a campaign of pro-business policies and reduced corruption. While his supporters see him as India's best chance to boost the country's ailing economy, critics have warned his religious hardliner reputation will fuel religious tension in the majority-Hindu country, which is home to 150 million Muslims.

India's hotly-contested election, which ended with Modi's Bharatiya Janata Party (BJP) easily clearing the winning post of 272 parliamentary seats, saw a record turnout of 66.38 percent. Official results on Saturday confirmed Modi's victory, as the Election Commission showed the BJP had crossed the threshold for a majority in India's 543-member parliament.

The leaders of India's ruling Congress party, Sonia and Rahul Gandhi, admitted personal responsibility for their defeat Friday, which spelled the end of their 10 years in power.

"We understand that victory and loss is part of democracy," party president Sonia told reporters in New Delhi. "We respect this decision. I take responsibility for this defeat."

Rahul, who congratulated Modi and the BJP on their victory, echoed the sentiments of his mother Sonia.

"We have done pretty badly. As vice-president of the party I hold myself responsible," he said."