Indian Truckers Strike to Protest Against Fuel Price Hike | Asia| An in-depth look at news from across the continent | DW | 02.07.2008

Around four million Indian truck drivers have gone on strike from Wednesday to protest against high fuel prices. A similar strike in 2004 crippled the country for a week and put a strain on India’s economic growth. 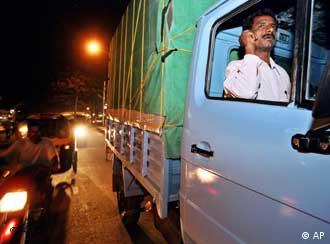 Around 200 angry truck drivers in the inner city of New Delhi are demonstrating against the government. They are swinging their fists furiously, shouting slogans like ‘’Down with the government’’ and ‘’Reduce Diesel Prices’’.

Around 20 kilometres away, in the bazaar area of Old Delhi, the truck drivers union meets on the first floor of a run-down building.

There is no other alternative but to go on strike, says union leader Charan Singh Lohara – a bulky man with a blue turban around his head. ``The government has levied so many taxes on truckers: toll tax, road tax, national permit and road development cess, diesel prices. We are in a loss. Nobody can run business in loss,’’ he complains.

At the beginning of June the government raised the price of diesel by 10 percent. The union leaders have called upon the authorities to cut the duty on diesel, and reduce other charges – otherwise none of the five million trucks from Delhi to Bangalore will go on the road.

Lohara is sure of victory. His trump card is the key role of trucks in the Indian economy: 70 per cent of the goods in India are transported by road, only 30 per cent by rail. And the railways are already over-burdened.

Economic expert Shrawan Nigam is concerned about the development. Already India is suffering a record inflation of 11 per cent. After the government increased diesel prices, all the transport companies followed by raising their prices. This will fuel inflation further, fears Nigam. ``Diesel affects everybody because all movement of any goods involves the use of diesel. That would have a cascading effect across the entire spectrum of prices,’’ he says.

Despite this, the truck drivers are determined to carry on with the strike until they achieve their goals.

Price rise should have been gradual

Oil expert RK Batra from The Energy and Resources Institute (TERI) in India says that the price rise was inevitable given the double whammy of domestic inflation and global fuel price rise.

On the other hand, he says that the global fuel prices had been rising in recent years, and the government should have been increasing the domestic price of fuel gradually, like by a few paisa every week. This way the impact would not be felt. ``But this time not having raised prices for such a long time and then suddenly giving it a big jump, obviously had an adverse impact on the public,’’ says Batra.

However, Batra says that the fuel price hike is a global problem faced in all countries. But compared to other Asian countries like Malaysia and Thailand, Batra says India has controlled the extent of the price rise to protect the consumer.