Modi met the Canadian premier nearly a week after he arrived on his first state visit. Trudeau's trip to India has seen him make multiple costume changes and show off dance moves but has not gone exactly to plan. 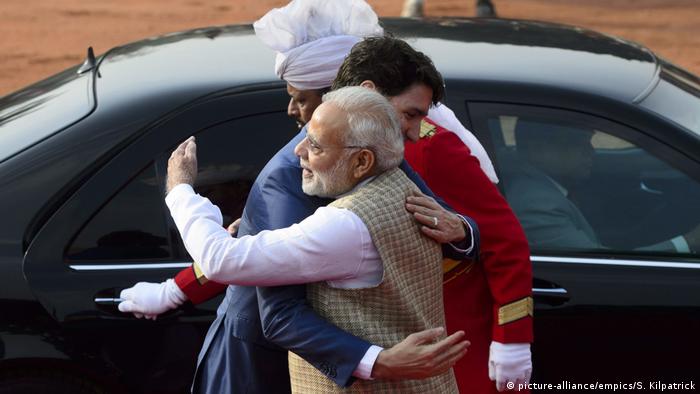 Modi greeted Trudeau with his signature bear hug on Friday, amid chatter that the Indian authorities were giving the cold shoulder to the visiting North American dignitary.

Trudeau has been fending off criticism that his government is not sufficiently critical of Sikh separatists in Canada. The separatists want to create an independent Sikh homeland in the Sikh-dominated north Indian state of Punjab.

The meeting took place a day after embarrassed Canadian diplomats had to revoke a party invitation for a man convicted of attempting to kill an Indian minister in Canada.

Read more: Social media and the rise of the Global Politician

Earlier in the week, Jaspal Atwal, a Canada-based former member of a banned Sikh separatist group, was photographed with Trudeau's wife, Sophie Gregoire Trudeau, at a reception in Mumbai.

The invitation to Atwal was the latest blunder in Trudeau's eight-day visit that has been dashed by speculation that the Canadian leader has received a lukewarm reception in India.

On his arrival in New Delhi last week, Trudeau was received at the airport by a junior minister and not Prime Minister Modi, who on many occasions has breached "protocol" to personally receive visiting leaders at the airport.

Also fueling the speculation was the absence of a customary tweet from the Indian leader welcoming a foreign dignitary. Modi, however, welcomed Trudeau on Twitter a day before their meeting.

Modi did not join Trudeau when he visited his home state of Gujarat — an exception to the recent past, where Modi has rolled out the red carpet for visiting world leaders.

When Trudeau visited the iconic Taj Mahal in Agra, he was not received by the chief minister of Uttar Pradesh, where the monument is located, but by district officials.

Indian authorities have denied the charge that India was cold-shouldering the Canadian premier. Trudeau's office has also rebutted the idea. 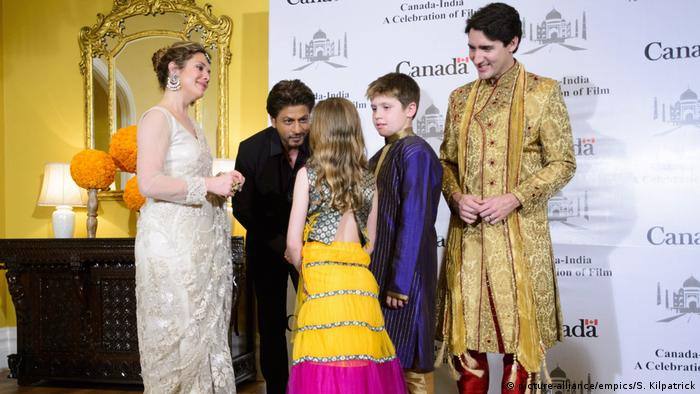 Trudeau has also drawn a lot of flak for his colorful "Bollywood" wardrobe, with many Indians criticizing him for trying too hard. Some have even rejected his family's seemingly endless wardrobe changes as cultural appropriation.

Canada's first family has worn traditional Indian outfits, including heavily embroidered kurtas and sherwanis that most Indians save for special occasions such as weddings.

Trudeau's wardrobe has attracted a lot of criticism on social media, including from former chief minister of Jammu and Kashmir, Omar Abdullah.

Trudeau also showed off his dance skills at a dinner in the Indian capital on Thursday.

Justin Trudeau has told a woman at a university event in Edmonton to say "peoplekind" rather than "mankind." Conservative commentators have latched onto the exchange to ridicule him. (07.02.2018)

Canadian Prime Minister Justin Trudeau is set to implement a wide-ranging and ambitious agenda and is counting on a diverse group of cabinet ministers to help him achieve it. Philip Fine reports from Montreal. (05.11.2015)