Indian farmers beat water scarcity with innovation | Asia | An in-depth look at news from across the continent | DW | 20.01.2021

After losing crops to severe drought for years, farmers in Maharashtra are seeing high yields through imaginative cultivation methods. They told DW that taking control is better than protesting government policy. 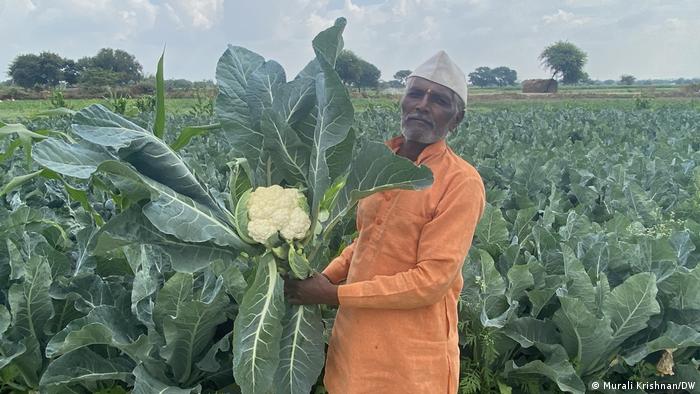 Farmer Ambalesh Kashinath shows off his yield of cauliflowers

Krishna Narode, 26, from Gangapur village in India's western Maharashtra state, is visibly excited as he surveys his four-acre farm where he cultivates an array of crops and fruits, including papaya, sugar cane, wheat and ginger.

In a few months, it will be time for harvesting and Narode knows that his efforts will pay dividends as he has relied on natural farming practices.

A few kilometers away, 51-year-old Mangala Maruti Waghmare, a woman farmer, is hoping to reap a windfall this year from her drumsticks, custard apple and mango produce.

"My fruits are delicious and will sell for twice the general market price. Multi-cropping as a technique is benefitting a lot of farmers here who are willing to change," Waghmare told DW.

Latur, one of the larger districts in the Marathawada, has been a perennial drought-prone area, notorious for its water scarcity and, at one point, farmer suicides.

Five years back, authorities had to deploy special trains to supply water to the region and police had to stand guard outside water tankers, reservoirs and distribution points. 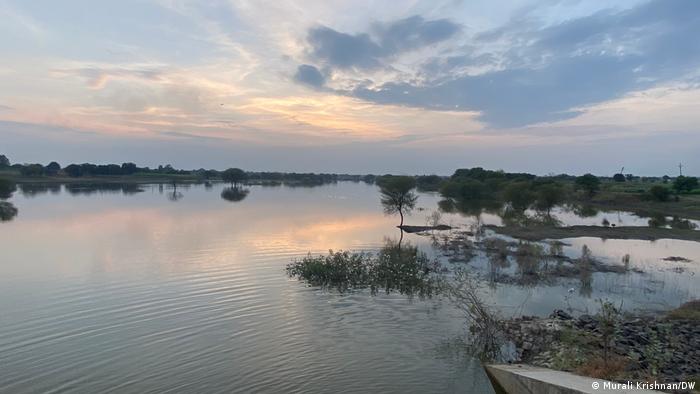 But an initiative led by agriculturalist Mahadev Gomare, with the help of a committed band of villagers, helped change the sad state of affairs. A few years ago, they rejuvenated the 143-kilometer-long (89-mile) Manjara river and its tributaries, which are a key source of water for around 500,000 people in 900 villages.

Over 900,000 cubic meters of silt was removed from the river, giving it a new life. The silt, in turn, was used in the fields to help level adjoining farms where sharecropping was taken up.

A river's ability to recharge groundwater is significantly reduced as silt accumulates at its bottom.

"Once the rivers were revived, it increased the availability of water, and other initiatives to improve the biodiversity and ecology of the area were started," Gomare told DW.

With technical help from the Art of Living foundation, which has expertise in river rejuvenation, desilting drains, gabion structures and arresting rainwater in rivers and rivulets were taken up. Since then, there has been no looking back for a large section of the farmers living here. 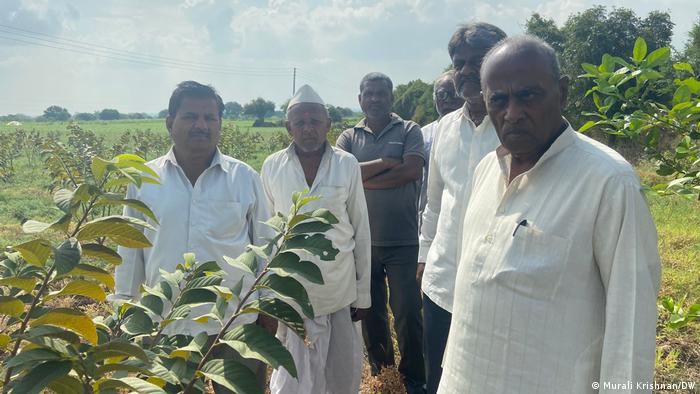 The farming community has since gradually moved to natural farming, afforestation, agroforestry, social forestry and climate-resilient farming and seeding practices to green the area and help increase their farm produce.

Entire village ecosystems were positively impacted because of the greater water availability, resulting in significant socioeconomic benefits. The changes led to a dramatic transformation in the lives of farmers. "It has taken time, but our labor has paid off and now we see a smile on many farmers' faces," Kaka Sehab Sindi, a farmer, told DW.

"We know farmers outside Delhi are agitating for a law guaranteeing a minimum support price for their produce, but we decided to change our own fates," Ambalesh Kashinath, a cereal crop farmer, told DW.

On the outskirts of Delhi, thousands of farmers from the northern states of Punjab and Haryana have been protesting resolutely for weeks against the three farm laws pushed through by Prime Minister Narendra Modi's Bharatiya Janata Party-led government.

They fear that these laws will destroy their livelihoods by offering big multinational corporations greater power over farming, and by undermining the main forms of state support to the cultivators, including minimum support prices (MSP) and government market committees.

Much of the farming practices in the Marathwada region now rely on utilizing the natural processes of the soil and seed system, thus saving on input costs without compromising on the yield. This has become valuable for small farmers who are already financially overstretched.

According to government figures, small and marginal farmers with less than two hectares of land account for as much as 86% of the 146 million total agricultural holdings in India.

Bringing new technologies and practices to such a large number of smallholders scattered over a vast countryside and integrating them with the modern markets still remain a huge challenge.

"Farmers across the country are not happy with what has happened to their incomes and this is increasingly getting reflected in their protests," Pandu Gangadar, a farmer, told DW. "We understand why Punjab farmers are angry over doing away with state-run wholesale buyers and markets that guaranteed a minimum support price," he added.

But instead of relying on the government for help, farmers in Marathwada have brought in changes to crop management, leading to better crop yields, improved food security and increased resilience to adverse effects of climate change.

How India's farmer protests could take a toll on the economy

The coronavirus has already pushed the Indian economy into a deep contraction. An ongoing farmers' protest against new agricultural laws threatens to exacerbate the economic malaise.