India: Farmers clash with police on protest march to Delhi

Thousands of Indian farmers have clashed with police while trying to enter the capital, Delhi, to protest against new laws. They say the legislation will leave them vulnerable to exploitation by big companies. 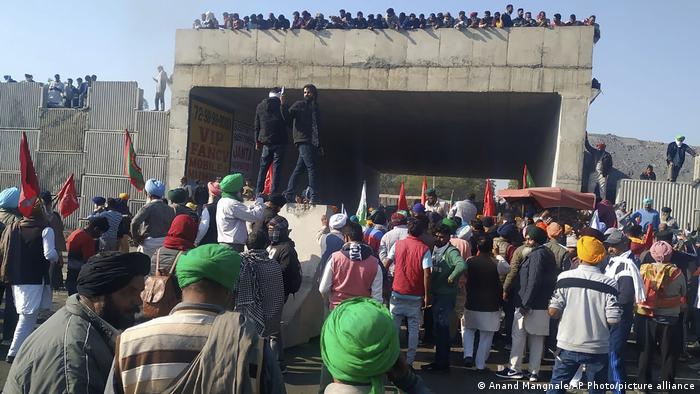 Police in India used tear gas and water cannon to try and stop protesters from reaching the center of the capital, Delhi, on Friday.

Television footage showed plumes of smoke with some individuals throwing stones at police. Thousands, including many from the large farming state of Punjab, pressed against barricades, waving flags and sticks.

Police in riot gear, deployed in large numbers on the boundary between Delhi and Haryana state, also stopped protesters from entering the city.

"We are fighting for our rights," said Majhinder Singh Dhaliwal, one of the protest leaders. "We won't rest until we reach the capital and force the government to abolish these black laws."

In a U-turn later on Friday, police allowed farmers to enter the capital to continue their march and hold a peaceful rally in one of the city's public grounds.

"(We) appeal to them to maintain peace," Delhi police said in a statement, following negotiations with protest leaders that allowed them to set up camp for the night.

The farmers say new laws, approved by parliament in September, could cause the government to stop buying grain from them at guaranteed prices. They claim this could lead to them being exploited by huge corporations that would buy their produce at cheap prices.

The laws were hailed as a watershed by Prime Minister Narendra Modi, with farmers free to sell crops anywhere — including to big corporations, instead of at government-regulated wholesale markets that assure farmers of a minimum price.

Many farmer groups say the new law would leave small producers with little bargaining power. They fear the government will eventually withdraw price support for wheat and rice.

The government says it does not plan to scrap the wholesale markets.

India's biggest dairy co-operative has managed to turn a profit during the coronavirus pandemic by bolstering its supply chain. However, farmers producing the milk say their wages barely cover operating costs.

Choga Lal Saini left his office job to grow fruit in the desert. Sixteen years later, he has created an oasis and become a source of farming knowledge for others near and far.