As India grapples with the deadly coronavirus, the Sikh community is seeking to bridge the gap in medical supplies and aid — just months after being labeled "anti-national" and "secessionist." 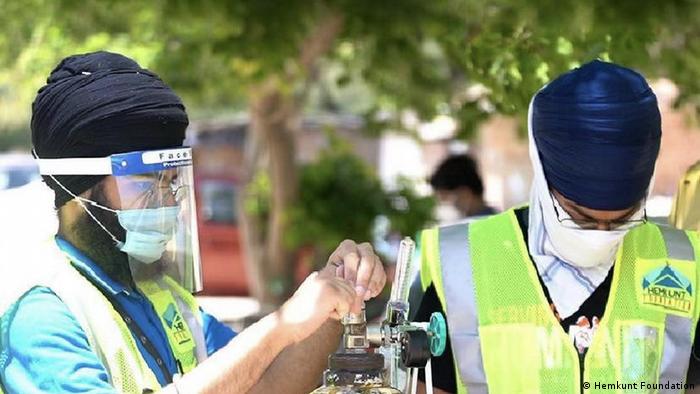 Harteerath Singh, who lives in the northern Indian city of Gurgaon, has contracted the coronavirus twice. In both instances, he took some time to recover, only to return and lead his nonprofit organization's work on the ground.

The Hemkunt Foundation was set up by Harteerath's father in 2010, but this year, the NGO was catapulted into the limelight after it provided thousands of oxygen cylinders — free of cost — to COVID patients who were facing breathing difficulties.

This organization is not alone in providing humanitarian aid amid India's COVID crisis. The UK-based international nonprofit Khalsa Aid and the Delhi Sikh Gurdwara Management Committee (DSGMC) are also carrying out on-the-ground relief work to bridge gaps in medical supplies. There is one common thread that ties these organizations — their faith.

All three base their work on the tenets of Sikhism, the faith of a religious minority in India that was erroneously labeled "anti-national" and "secessionist" earlier this year during massive farmer protests against the government's controversial agricultural reforms in the country.

'Welfare for all' is the guiding principle

Hemkunt Foundation has one guiding principle: "Sarbat da bhala" (welfare for all), which it derives from Sikh scriptures.

"It began as a passion project, just to do our part in giving back," Harteerath said.

But in 2013, on the way to Gurdwara Hemkund Sahib, a Sikh pilgrimage site in the northern state of Uttarakhand, his family was stranded after a massive cloudburst. Over 5,000 people lost their lives in the floods that followed.

The family made it out alive, but the incident left an indelible mark on their lives.

In the years that followed, the foundation has worked across states in India and internationally, even providing humanitarian aid to the Philippines in the aftermath of the Taal volcano eruption last year.

When the second COVID wave hit India hard in April, the health care infrastructure buckled under the weight of a massive coronavirus caseload. At its peak, India reported over 400,000 new infections and 4,000 fatalities a day, overwhelming hospitals and crematoriums. Experts believe the real numbers are far higher.

Many cities faced an acute shortage of oxygen cylinders, with patients and their families running from one hospital to another in the hope of securing a hospital bed equipped with medical oxygen. The shortage gave rise to black markets, which flourished as ordinary citizens gasped for breath.

Harteerath and his team of volunteers kicked off an "oxygen langar" — the Punjabi word "langar" is usually used for a free community kitchen at a gurdwara, or Sikh temple — where they provided cylinders free of cost to patients whose oxygen levels were dipping. Long lines began to form outside the foundation's Gurgaon office, prompting them to set up a makeshift oxygen center, which can accommodate up to 500 people.

"We have our work cut out for us. We have put out an open request — if your area needs help, reach out to us on our helpline number," Harteerath said.

As many hospitals were unable to take in COVID patients, some organizations decided to use their own space to set up health care facilities. DSGMC, a religious body, set up the Sri Guru Tegh Bahadur COVID Care Center at a local gurdwara in Delhi.

The facility is equipped with medical supplies and oxygen support for patients who are unable to secure a bed at a local hospital.

In case patients aren't able to travel to the facility, the organization arranges oxygen cylinders to be delivered to their homes. An ambulance service has been set up to take patients to health care facilities.

Finally, langars at local gurdwaras have been preparing food packets to feed thousands of people, including COVID patients, migrant laborers and those in need, each day.

From secessionist to savior

The work that these organizations are doing is not surprising. Sikhism, its followers say, enshrines the spirit of "seva" or service, which is not limited by class, caste, gender or religion.

However, the timing is crucial.

Just months ago, this community was branded as secessionist or "Khalistani" by sections of India's mainstream media and right-wing trolls for its support of Indian farmers, who have been protesting against three controversial agricultural laws.

Khalsa Aid was at the receiving end of much vitriol for its support to farmers at the start of this year. The nonprofit, which has been active in providing aid across the world, including Syria, northern Iraq, Yemen, and Greece, was under the scanner of India's National Investigation Agency, only for the investigation to be postponed indefinitely.

This came soon after the organization set up food stalls, foot massage machines and water heaters for farmers protesting at the Delhi border.

While a team remains at the protest sites, thousands of Khalsa Aid volunteers are now involved in distributing oxygen concentrators to those in need.

"Our religion taught us just one thing —'recognize the whole human race as one,'" said Gurpreet Singh, an administrator at Khalsa Aid India.

"We don't have any malice in our hearts even for those who leveled unimaginable allegations against us. Tomorrow, if they are in need, we will not think twice before coming out to help."

"The satisfaction you get when you serve someone is inexplicable," Singh added.

But they have a long way to go.

Harteerath just came back from India's eastern state of Jharkhand. A week before that, he was in Jammu and Kashmir, taking supplies to areas that are often overlooked.

"Our funding has slowed down as many people think that India's COVID crisis is over. That is not true — the virus has moved to the interiors of our country," Harteerath explained. "We need more support than ever."