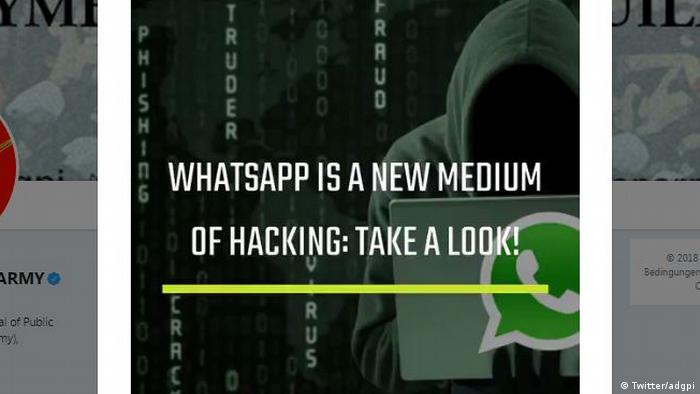 The Indian Army has alleged that Chinese hackers were using WhatsApp groups to mine personal data from Indians.

In a video posted on Twitter, the Additional Directorate General of Public Interface (ADGPI), the Indian Army's official handle, warned that WhatsApp was the latest platform being used by Chinese hackers to spy on Indians.

"Chinese numbers starting with +86 (China's country code) barge into your groups and start extracting all the data," the Indian Army said and urged people to regularly "audit" their WhatsApp groups for any unknown numbers.

"Destroy the SIM card if you change your number, and delete your WhatsApp on that number," the army said in the video, which was retweeted by India's Defense Ministry.

The video did not specify whether the hackers are backed by the Chinese state.

Last year, the Indian Army also warned its soldiers stationed along the Chinese border against using a host of applications, including WhatsApp, that were deemed vulnerable to Chinese hackers.

The warning comes just months after the two neighbors defused a potential border conflict by ending a standoff along part of their 3,500-kilometer (2,200-mile) shared border. The two nations fought a war over the border in 1962. Many of the disputes remain unresolved until today.

"There are certain paid tools such as Spyzie that can be used to easily gain access to another person's smartphone," Halde said.

Halde says users should ensure that they don't become part of "random groups" or click on links sent by an unknown number.

He says other smartphone applications are equally vulnerable.

"We go ahead and install applications without gauging the security risks. Why should we give access to our contact list or camera to an app that does not even need access to them?" Halde said.

India's Defense Ministry has announced that it test-launched an Agni-V missile that can carry a nuclear warhead. The ICBM's 5,000-kilometer range means it is capable of hitting Pakistan, China and parts of Europe. (18.01.2018)

The Dalai Lama arrived in a disputed region on the India-China border on Wednesday. The Tibetan spiritual leader's appearance in India's northeast, however, is rubbing Beijing the wrong way. (05.04.2017)