India: 9 killed as boulders fall from hilltop in landslide

In a video that went viral on social media, large boulders were seen falling from a hill and hitting several parked vehicles before destroying a bridge in the Himalayan state of Himachal Pradesh. 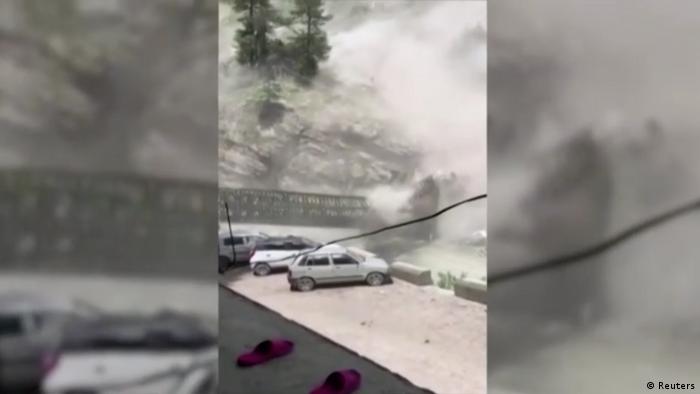 A screenshot from a video shows boulders hitting a bridge, causing it to collapse

Nine people were killed after boulders fell and hit their vehicle in India’s northern state of Himachal Pradesh, which was hit by a landslide. The boulders eventually struck a bridge, causing it to collapse.

In a video that went viral on social media, large boulders were seen falling from a hill, hitting several parked vehicles before destroying the bridge in Himachal Pradesh's Kinnaur district. The boulders hit a vehicle carrying 11 people, mostly tourists from the national capital of New Delhi and other parts of the country to the Himalayan state, local newspaper Hindustan Times reported.

Nine were killed and three — including a passerby —were reported injured in the incident that took place near the Badseri village in the Kinnaur district of Himachal Pradesh, according to the Reuters news agency.

"My heartfelt condolences to the families of those who lost their lives in this. All arrangements are being made for the treatment of those injured in the accident," Prime Minister Narendra Modi said in a tweet.

Indian President Ram Nath Kovind also expressed his condolences to those affected by the landslide.

It remains unclear what caused the incident, however, the officials had previously issued several landslide warnings due to predicted heavy rainfall in the region.

Rescuers are still active in western parts of the country where this year's monsoon rains caused deadly flooding. At least 125 have been killed as massive flooding and landslides hit the state of Maharashtra in recent days.