At least 28 people have been killed in an explosion in the southern Turkish town of Suruc, near the border with Syria. Turkey's president has described the blast as an "act of terror." 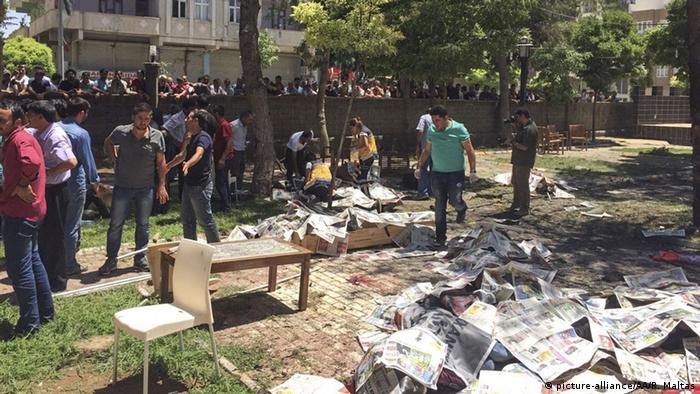 The explosives went off in the garden of a cultural center in the mostly Kurdish town of Suruc on Monday, injuring around 100 people.

"We are drowning in grief that 28 citizens died and a large number of people were injured as a result of an act of terror," Turkish President Recep Tayyip Erdogan said during a visit to Cyprus. "On behalf of my people, I curse and condemn the perpetrators of this brutality."

There was no immediate claim of responsibility, although a government official quoted by Reuters said there was strong evidence to suggest it was "a suicide attack by the 'Islamic State' (IS)."

Around 300 people from the pro-Kurdish Federation of Socialist Youths had reportedly gathered at the cultural center ahead of a planned trip to help with rebuilding efforts in the conflict-torn town of Kobani in northern Syria.

"Turkish and Kurdish youth had come to cross into Kobani, and there were three or four days of activities planned," Pervin Buldan, a senior lawmaker from the pro-Kurdish HDP opposition party told Reuters.

Earlier in the day, the association had tweeted photos of its members eating breakfast at the center.

The office of Turkish Prime Minister Ahmet Davutoglu said three government ministers had been sent to the scene.

Suruc lies about 10 kilometers (6.2 miles) from Kobani, the site of fierce battles earlier this year between IS extremists and Kurdish fighters backed by US airstrikes. IS was driven out of the town in June.

At the height of the violence, tens of thousands of Kobani residents escaped across the border to take refuge in Suruc and neighboring villages. The town is home to one of the biggest camps for Syrians who've fled their homes, and now shelters about 35,000 refugees.

In one of the largest operations of the US-led coalition, airstrikes have targeted "Islamic State" positions in Iraq and Syria. There were a total of 38 airstrikes reported in the operation on militant-held positions. (06.07.2015)

"Islamic State" fighters are assaulting Kurdish forces holding the Syrian city of Kobani, a monitoring group has said. The Islamist militia reportedly launched the attack with a suicide bombing near the Turkish border. (25.06.2015)