In Egypt, online group Qawem saving hundreds of women from sextortion | Middle East| News and analysis of events in the Arab world | DW | 20.06.2021

Last summer, Mohammed Elyamani was hit by the news that a 17-year-old girl who had reached out to him for help after her ex-boyfriend threatened her with "sextortion" had committed suicide.

When the girl messaged Elyamani about her case, the 35-year-old social activist — who uses Facebook to raise awareness about sexual harassment and sextortion, threats to distribute private and sensitive material — advised her to go to the police.

The next day, he learned she had taken her own life after her ex-boyfriend sent the pictures to her father. When Elyamani contacted the girl's family to take legal action against the extorter, the response was: "We don't want scandals. She's already dead."

Overwhelmed by guilt, Elyamani vowed to do all he could to save other victims from the same fate. In June 2020, he created Qawem — Arabic for Resist — a page and group on Facebook to help victims of sextortion. Today, the group has over 250,000 followers.

Qawem's network consists of 200 volunteers. While female volunteers run the Facebook group and respond to victims' messages, others collect information about extorters, locating their families, co-workers and employers, if needed. 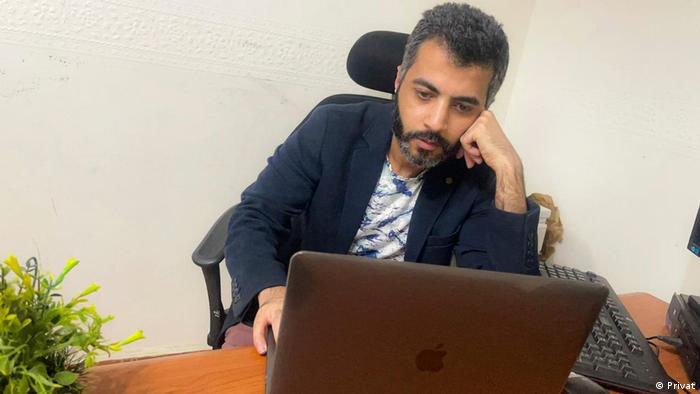 Mohammed Elyamani runs his Facebook group alongside his job in marketing

When the volunteers receive a report about an incident, they contact the extorter online. They ask him to delete all the content he's holding against the victim, explaining the consequences of his actions and threatening to expose him to his family, friends and at his workplace.

The extorter is asked to film himself while deleting the material, and then send the video to Qawem and issue an apology to the victim.

Pressuring extorters to back down

Elyamani said some extorters respond when they realize the victim is not alone. "But most don't unless we threaten to expose their actions," he added.

The group said it now receives around 500 cases per day, resolving some 200 every week. It takes between a few hours and a week to get an extorter to back down, the group said.

Randa* is among those who have been saved by Qawem.

The 29-year-old said it took three days to resolve her case, after her boyfriend threatened to expose her nude pictures when she told him she wanted to break off their relationship.

Although Egypt approved a law last August to protect the identities of victims of sexual violence, including sextortion, to encourage more women to come forward, Randa was still afraid of approaching the police.

According to Aziza Eltawil, a lawyer with the Egyptian Initiative for Personal Rights, an independent human rights organization, Randa's fears were justified.

Many victims avoid speaking to police for fear that the news will be leaked to their families, the media or online, said Eltawil.

"Sometimes the lawyer of the accused and his family try to defame and discredit the victim," she said. Also, Eltawil said, the legal process often drags on, and victims under the age of 18 must file the official complaint via their legal guardian. This discourages young victims from reporting these incidents, as they are too scared to tell their parents.

Yasser Saad, a lawyer who handles sextortion cases, said Egyptian law protects victims of sextortion, and punishes extortion and the violation of another's privacy with fines, prison or both. But its implementation and the procedures of filing a complaint remain problematic.

The length of time between filing an official complaint and the start of the investigation leaves room for the extorter to carry out his threat, said Saad, while the masculine culture at police stations often blames victims for such crimes.

Nourhan*, 30, said police in Assiut Governorate in southern Egypt took 40 days before questioning her ex-fiance after she filed an official complaint against him for sextortion last October.

Eltawil explained that the duration between filing a complaint and questioning the culprit "depends on how fast the police can obtain the IP address of the suspect's device and complete the necessary investigations."

Although the case eventually forced her ex-fiance to back down, Nourhan said she could have been murdered had he carried out his threats during that time.

Southern Egypt is known for its conservative and patriarchal society, and so-called honor killings — where a woman is killed for perceived immoral behavior — are believed to be common.

Some cases are beyond Qawem's scope

Elyamani admits that Qawem's biggest challenge in resolving a case is when the victim doesn't know the blackmailer.

"Some women sell their phones after deleting all stored images and videos, not knowing that a new owner could restore the deleted content using special programs. These women then start getting blackmailed from the new owners of their phones, whom they do not know," he said.

In these cases, he advises victims to go straight to the police.

#Cybercrime: Woman stands up to blackmailer

Indian woman stands up to blackmailer

"There are cases where women fall victim to fake advertisements for a modeling career that ask girls to send revealing images and then they get blackmailed," he said.

Elyamani said cases demanding money have risen during the pandemic, but experts believe Qawem's approach will continue to gain appeal.

Ahmed Abdullah, a psychology teacher at Zagazig University northeast of Cairo, said many in Arab countries "prefer to settle disputes through traditional methods rather than the rule of law."

"All a victim wants is for the material being used to threaten them to get deleted, without any scandals. If the informal route proves to be effective, they take it," he said.

*Names have been changed at the request of the victims

This article was written in collaboration with the media network Egab.

If you are suffering from serious emotional strain or suicidal thoughts, do not hesitate to seek professional help. You can find information on where to find such help, no matter where you live in the world, at this website: befrienders.org

India seeks to reform its military amid new security threats