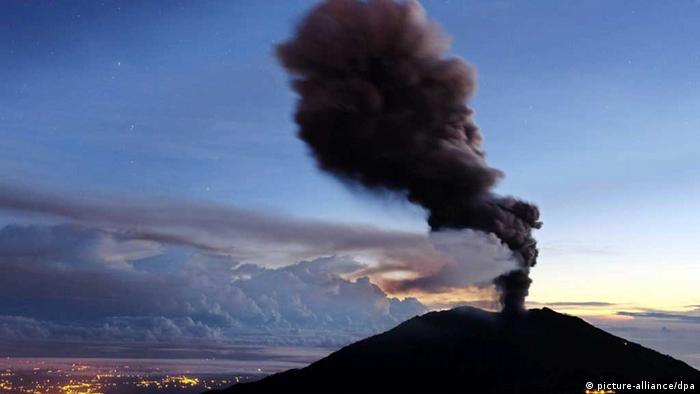 The moderate eruption, which included rocks around the crater area, hit at about 2100 UTC on Monday, raising eyebrows but not great alarm about 40 miles away, in Costa Rica's capital, San Jose, the Volcanic and Seismic Center reported.

Accompanied by a strong smell of sulfur and a coating of ash falling from as high as 2.5 kilometers (1.5 miles) in San Jose, the eruption of the the 3,340-meter (10,950-foot) volcano lasted about a half hour.

Inactive for 130 years, Turrialba rumbled back to life in the 1990s. In late October last year, the volcano erupted with great force, spewing ash and magma.

It has rumbled ever since. An eruption in early March (pictured) shut down Juan Santamaría, the main international airport, for nearly two days. Monday's eruption did not look like it would lead to flight cancellations.

There have been a number of natural disasters owing to seismic activity in recent weeks. Nepal is facing a long rebuilding process after a 7.8-magnitude earthquake in April devastated the country.

In late April, the eruption of a volcano in Chile shut down airports in multiple South American countries. In eastern Congo, the active volcano Mount Nyiragongo has been called a ticking "time bomb."