World leaders meeting ahead of a major G20 summit have laid the groundwork for what could be the biggest revamp of the International Monetary Fund since the body's creation, giving greater power to developing countries. 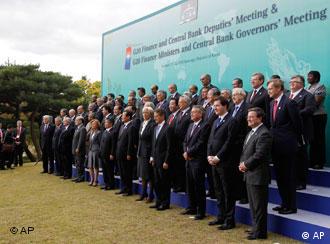 G20 leaders are meeting ahead of a summit in three weeks

Representatives of the Group of 20 leading industrial nations on Saturday reached an agreement on how to reform the International Monetary Fund, decreasing Europe's influence on decision-making and increasing that of developing nations like China and India.

Speaking to reporters at the meeting on Saturday, IMF managing director Dominique Strauss-Kahn called the deal a "very historic agreement."

"This makes for the biggest reform ever in the governance of the institution," he said.

The agreement came out of meetings of G20 finance ministers and central bankers in Gyeongju, South Korea, where G20 heads of state are to meet in three weeks. It would likely go into effect in 2011.

At the heart of the reforms is a substantial change in how the body is governed, shifting more than 6 percent of voting power to fast-developing countries. Europe would also give up two out of the eight or nine seats it controls at any given time on the 24-member executive board. 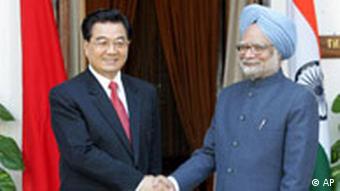 China and India are to have greater influence on decision-making

Current IMF governance largely reflects the geopolitical situation at the time of the body's founding after World War II, and it has proven outdated with the rapid rise of economies like China, India, Russia and Brazil. Under the new agreement, these countries would have greater voting power as well as greater financial obligations and access to IMF funds.

The Fund's five biggest members - the United States, Japan, Germany, France and Britain - each control their own seats on the board and are able to appoint their own executive directors. The reformed structure would require these directors to be elected by the full board.

The United States had sought a greater reduction in Europe's influence on the board, but agreed to the compromise in return for retaining its veto power over the Fund's most important decisions.

The IMF functions as a watchdog over the global financial system and intervenes when countries are threatened with the inability to make payments on debt. Its influence has increased since the 2008-2009 global economic crisis, in Europe most notably with its joint EU bailout fund for Greece.

Meanwhile after the meeting of G20 financial representatives, German Economics Minister Rainer Bruederle offered criticism of the US Federal Reserve, accusing it of artifically manipulating its exchange rate.

"There was criticism of the American policy of monetary easing, or creating more liquidity," he said. "I tried to make clear in my contribution that I regard that as the wrong way to go... An excessive, permanent increase in money is, in my view, an indirect manipulation of the (foreign exchange) rate."

US Treasury Secretary Timothy Geithner said he backed a "strong dollar" and denied any policy of weaking the currency to boost exports by making American goods cheaper abroad.

Economics Minister Rainer Bruederle began his two-day trip to China with warnings of a "trade war." He is hoping his visit will help promote “sensible arrangements.” But observers are skeptical. (12.10.2010)

International Monetary Fund policymakers have failed to reach a consensus on measures to ease global economic imbalances and head off a possible "currency war" over exchange rates. (10.10.2010)

A strong earthquake in the Aegean Sea has rattled Greece and areas of western Turkey, killing more than a dozen people. The magnitude 7.0 quake reportedly caused several buildings to collapse in Turkey's Izmir.

People have been dying lonely deaths in nursing homes and hospitals around Germany due to coronavirus restrictions. It has been devastating for those they leave behind — and it doesn't just affect COVID-19 patients.