In Berlin, life is still a cabaret

The roaring Twenties were Berlin's cultural heyday, and gave the city its reputation as a hotbed of hedonism. Weimar-era decadence is once again all the rage, as the party crowd trades in hooded tops for feather boas.

On one count, Berlin has always disappointed me. Seeing Bob Fosse's 1972 musical "Cabaret" at an impressionable age was one of the main reasons I moved here: I came expecting to find the city depicted in Fritz Lang's "Dr. Mabuse" films, complete with old ladies straight out of Otto Dix paintings smoking alone in cafes and Pirate Jenny from "The Threepenny Opera" lingering on street corners. But I soon discovered that in 21st-century Berlin, few traces remain of the wanton waywardness of Weimar culture.

But could the "divine decadence" so beloved by Sally Bowles be making a comeback? It seems it might, judging by the popularity of the "Boheme Sauvage" club nights. Taking place every few months, they're organized by The Society for Elegant Entertainment - founded by a certain Fraeulein Else Edelstahl - and are billed as a night for "everyone for whom less is never more, and too much is never enough." 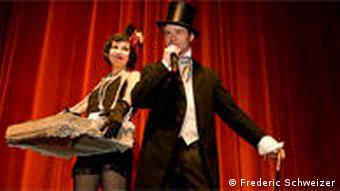 The master of ceremonies and his sidekick

Putting on the ritz

One way or another, that could apply to most people who like going out in Berlin. But these parties are different. They pull a crowd that looks like it's spent the last seven decades in a time-warp, and Berlin has no shortage of appropriate venues to accommodate them.

Even though the city is legendary for makeshift clubs in former industrial warehouses, it also knows how to do faded grandeur. "Boheme Sauvage" can take its pick of nightspots that hark back to the decades when Berlin was considered Europe's capital of arts and culture, from the Wintergarten Theater on Potsdamer Strasse to the Gruener Salon at the Volksbuehne once run by Max Reinhardt, and the Oxymoron in the historic art deco Hackesche Hoefe.

All neo-Baroque stairways and gilt-edged mirrors, the venue last weekend was the Heimathafen Neukoelln, a popular dance hall in the 1920s and a perfect backdrop for the evening's frolics. There's a line outside tailing along Karl Marx Strasse when I get there, and I see a few sheepish looking punters in jeans and anoraks sloping off down the road who've obviously been turned away. The dress code is strict, but most people are more than happy to stick to it - there aren't many places in Berlin where you can wear your gladrags with pride, after all. 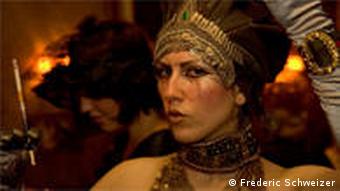 The dresscode at Boheme Sauvage is taken very seriously

But I'm amazed how seriously everyone's taking it. Most of the men have opted for tuxedos, monocles and slicked back hair, while the women are decked out in full flapper regalia, complete with drop-waist frocks, strings of pearls and finger wave bobs. As they enter, everyone is given a stash of Reichmarks they can blow at the casino upstairs, and the tipple of choice is - aber natuerlich - absinthe. Or something like it, at least.

Dancing on a volcano

Couples are foxtrotting away on the dance floor, courtesy of a DJ called Dr. Hirschfeld, named after the physician who founded the Institute for Sexology in Berlin in 1919; there's a doe-eyed cigarette girl milling about; a tap-dancing conferencier called Coco who rolls his Rs and twirls his cane with admirable gusto; a Bix Beiderbecke tribute band and a burlesque stripper called Mopsy Meyers.

It's nowhere near as debauched as Das Ambassadeur and Die Passage must have been back in the day, and I'm sure the likes of Anita Berber, expressionist exotic dancer extraordinaire, would've wiped the floor with Mopsy Meyers. It feels more like an upmarket fancy dress party than a sordid demi-monde - a celebration of Weimar licentiousness, perhaps, but stripped of the genuine depravity and sleaziness that defined the era. 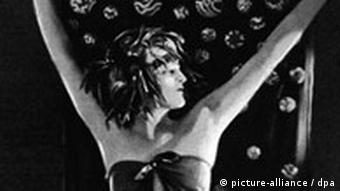 But that's probably just as well.

I take a cab home at four in the morning. The peacock feather in my headband is drooping, and I've lost an elbow glove. But for a minute there, watching Berlin speeding by outside my window, I feel just like Sally Bowles.

Berlin's mayor, Klaus Wowereit, once proudly announced that his city was "poor but sexy," but with this rather chic poverty comes a cynical exploitation of eager young workers. (29.10.2010)

Germans are falling in love with tango

The Germans may not be famous for passionate physical expression, but many are swooning for Argentinean tango. Last year, it was added to UNESCO's World Heritage list and for 2010 it has been named dance of the year. (25.08.2010)

More than 30 years after her death, admirers pay tribute to one of Germany's most enigmatic - and overlooked - artists, dancer and actress Valeska Gert. She's said to have laid the foundations for the punk movement. (17.09.2010)