In Armenia, factchecking disinformation on politics and war

DW Akademie supports reliable journalism in Armenia that factchecks disinformation and reports on corruption. The conflict over Nagorno-Karabakh and presidential politics have tested their skills. 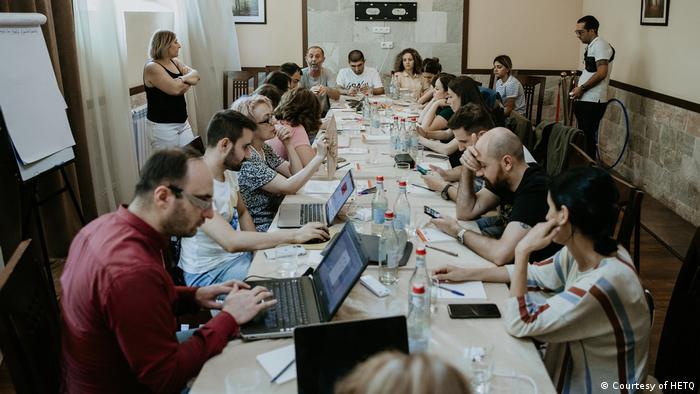 In 2020, an Armenian editor, photographer and camera crew with Hetq, an online publication based in Yerevan, headed to the country's eastern border with Azerbaijan. The name in Armenian means 'trace' and that's what the team was up to: verify if what their government was insisting about the conflict in the region of Nagorno-Karabakh was true.

Meanwhile in Yerevan, Hetq's reporters sifted through the news their colleagues sent back from the front.

"We had firsthand information from our colleagues," recalled Vahe Sarukhanyan, a factchecker with Hetq. But it wasn't easy to get this information through, as there were two fronts in this so-called information war. Azerbaijan's media were reporting one storyline, and the Armenian government another. Neither version really reflected what Sarukhanyan's colleagues were reporting, which was that there were heavy casualties and losses on both sides, like in any war.

Nagorno-Karabakh's border crisis dates to the early 20th century, with the dispute being both ethnic and territorial. In 1988, just before the breakup of the Soviet Union, tensions between Armenia and Azerbaijan flared. Both countries claimed sovereignty over the enclave, which is mostly populated with Armenians but is located within Azerbaijan. Occasional ceasefires have followed, but sporadic fighting has continued since 2010, killing thousands. The conflict escalated again in September 2020. 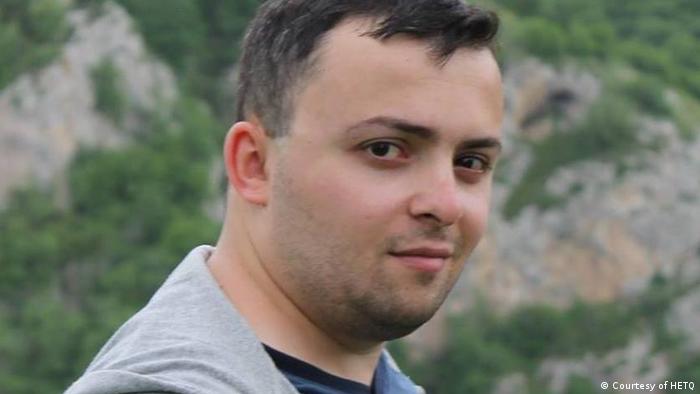 Vahe Sarukhunyan, a factchecker in Armenia with the online investigative publication Hetq

"There were a lot of restrictions then because the government declared martial law," Sarukhanyan explained. "It was a big challenge. But we looked at what was the propaganda versus what our colleagues were telling us, firsthand, was happening on the front."

Today, Hetq is one of ten independent media outlets DW Akademie is working with in Armenia. Because journalistic factchecking is so critical to civil society, particularly in an age of chronic disinformation, DW Akademie started its projects in Armenia with funding from the European Union in October 2021. It has been providing grants and equipment, as well as support with media metrics and audience engagement analysis.

The work is part of the project "European Media Facility Armenia: Building Sustainable and Professional Media" funded by the European Union in Armenia and the German Federal Ministry for Economic Cooperation and Development (BMZ) and implemented by a consortium led by DW Akademie with BBC Media Action, Open Society Foundations - Armenia, Hetq and Factor TV.

False and misleading information has been a problem in Armenia for a while. The COVID-19 pandemic and the Nagorno-Karabakh conflict have made it harder for media professionals to dispel disinformation. DW Akademie's commitment in the country aims at building trust between citizens and the media.

"Regional media are the ones who really have to counteract disinformation," said Satenik Baghdasaryan, DW Akademie’s project manager in Armenia. She noted that the country's mainstream media remain in the hands of the government and that factchecking those reports is particularly difficult because verification occurs only after the news has already reached so many readers and viewers.

"Especially since 2020 and the war and the pandemic," she said, "hate speech and disinformation have really been reviving, along with a lot of manipulative online content. So, our idea was to join forces, to have a collaborative factchecking effort."

'It’s all on our shoulders'

Kristine Barsegyan, a projects manager with Investigative Journalists NGO, which is Hetq's publisher, has worked in the factchecking arena for 22 years. She acknowledges that factchecking is both time-intensive and costly, but that with disinformation so rampant, all the more necessary. Moreover, the demand has grown.

"Our audience is not only in Armenia," she said. "We have readers in the diaspora, in the United States, Russia and in Azerbaijan. We do often feel that it's all on our shoulders, but we see this as our mission."

She points to Hetq's successes, such as a 2020 series of investigations – for which Sarukhanyan contributed – on non-declared property belonging to dozens of high-ranking officials and their foreign business activities. The stories, researched for a few years, lead to several resignations and the return of illegal allocations to the state budget.

Another achievement, in 2021, resulted from investigating and factchecking the citizenship records of then-president Armen Sarkissian. Sarkissian, who is a British citizen, had not revealed that he also is a citizen of St. Kitts and Nevis via investments in the country. The lack of disclosure, and the factchecking of it, led to his resignation.

"I think public expectations and attitudes toward the media have changed with this kind of work," said Baghdasaryan. "Whether it is fake news, or official information that is wrong, people have learned that official sources can't necessarily be trusted. We work to get trusted information out there."

Disinformation campaigns: “Lies can turn deadly or threaten the stability of societies”

Trolls and paid influencers are behind major disinformation campaigns in Africa. Allan Cheboi and his team at Code for Africa have developed strategies to uncover those tactics during elections and the pandemic.

During recent protests in Tbilisi, a right-wing mob hunted down journalists. For Tamar Kintsurashvili the incident was the result of disinformation campaigns that she and her team combat.