The police union wants to send police from Turkey on patrol in problem neighborhoods in Germany. The goal is higher acceptance of German officers - but the idea is controversial. 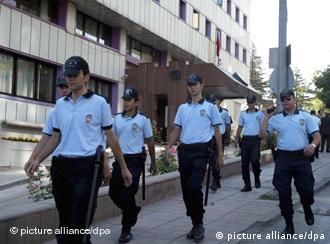 Will Turkish police soon be a regular sight on German streets?

In front of a bridal store, a man and a woman sit on wooden chairs, drinking black tea from small glasses - an everyday scene in many towns in Turkey. But Hatice Koek's bridal shop is located in Germany, in the Duisburg neighborhood of Marxloh. The 32-year-old Koek has been selling wedding dresses here for years. When she heard about the idea of using Turkish police officers in North Rhine-Westphalia, where Duisburg is located, she was outraged. It would be "a massive insult, to allow Turkish police officers to patrol here," Koek said, not to mention destroying integration, she added. 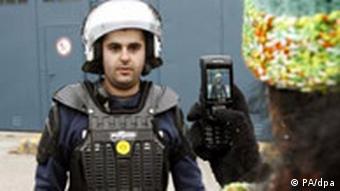 In Berlin, a program trains young people of Turkish origin as police officers

The bridal shop is just one of many small businesses on Wesel Road operated by Turkish immigrants. Restaurants, pharmacies, supermarkets, boutiques - all the businesses have Turkish names. Visitors from Turkey would feel right at home. The residents, too, feel comfortable in their surroundings. But do they really need Turkish police? A Turkish barber also rejected the idea. "I would laugh if I saw a police officer here in a Turkish uniform," said a young man who was having his hair cut. If someone has no respect for the German police, he won't take a Turkish policeman seriously either, he said.

But the head of the German police union in North Rhine-Westphalia is hoping for just that: Erich Rettinghaus wants to send Turkish policemen on patrol with their German colleagues. His goal is to find why young people of Turkish origin often, in his opinion, have no respect for the police, and whether they would respond differently to Turkish policemen. According to Rettinghaus' plan, Turkish officers would be deployed in immigrant-heavy districts such as Marxloh in Duisburg and Ehrenfeld in Cologne and given language support by Turkish-speaking policemen and -women or interpreters.

Rettinghaus doesn't see his suggestion as a declaration of helplessness. Rather, it's more like an exchange, such as the ones with Dutch police on the border to the Netherlands. "During peak holiday times, German police are dispatched to places where many German tourists go. For example, in [the popular Dutch resort town] Renesse, there are German police to break up brawls in nightclubs and pubs," says Rettinghaus. 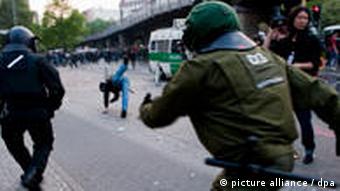 Many citizens with Turkish background are skeptical of importing police officers

But the presumed foreigners who live in Marxloh and Ehrenfeld are not tourists. Most of them were born in Germany and are part of German society. The lack of acceptance of German police goes both ways, said a group of young people in front of a video arcade. The boys often feel they are treated badly. "In fights between migrants, for example, the German police only show up after everything is over," complained a 19-year-old. Another says: "If a German is caught cycling in the wrong bike lane, the policeman says simply: 'Continue on.' But a Turk would be given a ticket right away."

'Guest officers' with no authority

These descriptions go against what Rettinghaus says are police officers' experiences on the beat: young people frequently try to prevent an arrest by attacking the patrol car and attempting to free the arrestee. In such situations the Turkish "guest police" could intervene by arbitrating, Rettinghaus says. However, the Turkish police officers would have no legal powers and would not carry weapons. 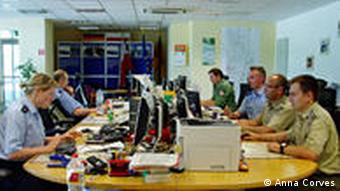 Although many Marxloh residents are skeptical of the idea, some do believe that the deployment of Turkish police officers would help to bridge the differences in attitude. An older couple in a supermarket posits that the Turkish uniforms would make a great impression on young people.

In one of the many traditional teahouses in Marxloh, men are playing cards and backgammon. A 32-year-old says he finds the idea of Turkish police in Germany absurd. The state should educate young immigrants to join the police force instead, he argues. He himself would be ready to give up his well-paid job, but he doesn't have the necessary high school diploma to become an officer. Instead of getting policemen from Turkey, who know neither the country nor the language, the state ought to approach people like him and recruit them, the outraged man said.

Currently only one in seven of police trainees in North Rhine-Westphalia comes from an immigrant family. Rettinghaus would like to see more police officers with immigrant background. Working with Turkish police, he says, is not an alternative, but a supplementary measure. So far, however, there have been no talks with the Turkish authorities. Whether his idea can be realized at all is still up in the air, admits Rettinghaus. The state interior ministry's reaction has been "restrained, so far." But the state government has is new in office. And the interior minister has many issues to tend to at the moment. Rettinghaus hopes that his proposal will get its turn soon.

German Chancellor Angela Merkel has said there is no need to amend the current law on migrant workers. She was responding to calls from the German economy minister to open the German labor market to skilled foreigners. (02.08.2010)