Joachim Löw watched on as German international Ilkay Gündogan inspired seemingly unstoppable Manchester City to a 4-0 win. In Turin, Sami Khedira had less luck as Tottenham fought back to draw with Juventus. 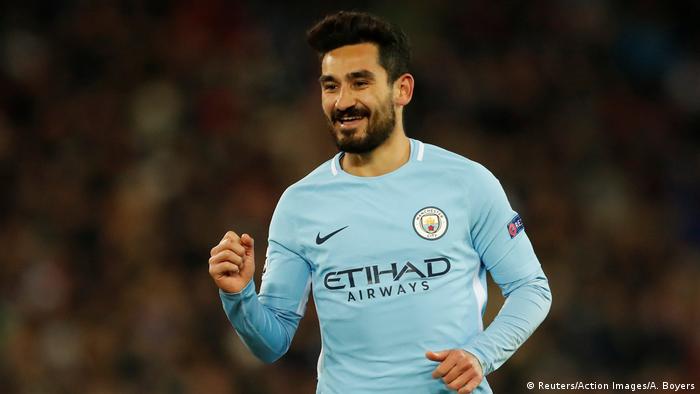 Ilkay Gündogan scored twice as Manchester City won 4-0 away at Basel to all but secure their place in the quarterfinals of the Champions League.

The German international, who missed much of last season with a serious knee injury, gave Pep Guardiola's team the lead after a quarter of an hour with a deft near-post header from Kevin De Bruyne's corner.

In the second half, under the watchful eye of Joachim Löw at the St Jakob's Park, he curled a brilliant effort into the top corner to make it 4-0, while goals from Bernado Silva and Sergio Aguero completed the rout.

Despite the scoreline, not everything had gone City's way in a surprisingly open start to the game. After just six minutes, the Premier League leaders were opened up by a long ball but Kyle Walker cleared after lone striker Dimitri Oberlin had poked past Ederson.

But when City finally began to take control of proceedings, it was the metronome Gündogan who conducted proceedings in midfield - as Löw won't have failed to notice.

In the second half, the German national team coach had two players to observe as Leroy Sané replaced Raheem Sterling, but it was again Gündogan who had a chance to score his hat-trick. After a lightning-quick run down the left, Aguero cut back but the German's effort was well saved and the score remained 4-0.

Gündogan, Guardiola and City can start planning for the next round. 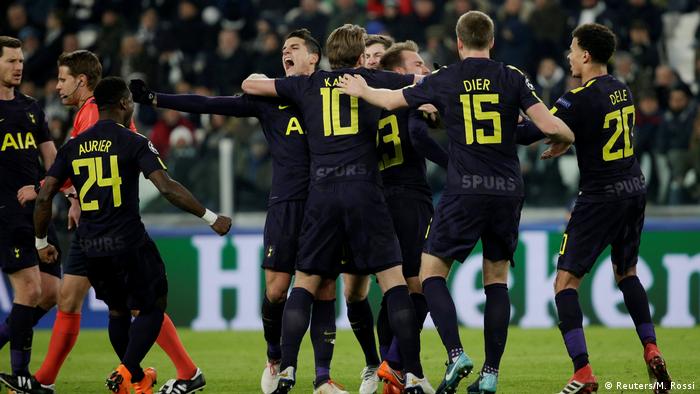 Sami Khedira's Juventus endured a more disappointing evening as the Italian champions gave away an early two-goal lead against Tottenham Hotspur, leaving the tie in the balance ahead of the return leg at Wembley.

The "Old Lady" of Italian football got off to a dream start in Turin as a quick-fire brace from Gonzalo Higuain saw them 2-0 up within ten minutes, but away goals from Harry Kane and Christian Eriksen rescued a vital draw for the Londoners.

Yet it had all started so well for the hosts. First, the Higuain was left completely unmarked by Dele Alli to volley home Pjanic's free-kick on the turn after just two minutes before, seven minutes later, he stepped up to double his team's lead from the spot after Ben Davies had handled in the box.

Suddenly, after finishing at the summit of a group which included Real Madrid and Borussia Dortmund, Spurs were rocking at the foot of the Alps.

The early shock had the potential to kill the tie there and then but the visitors gradually grew into the game, Kane heading straight at Gianluigi Buffon before placing another header inches wide.

So when the goal did come, it was no surprise that it was the England striker who scored it. Latching onto Alli's through-ball, Kane rounded Buffon before placing the ball into the empty net. It was the first goal that the Italian champions had condceded in 696 minutes of football and gave the vocal travelling support some hope. 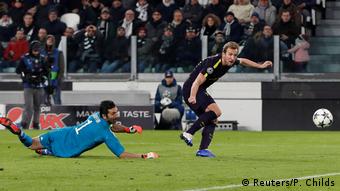 Back in it: Harry Kane halves the deficit

But Spurs always looked vulnerable on the counter-attack and when former Bayern Munich winger Douglas Costa broke into the box on the stroke of half-time, Serge Aurier brought him down. A clear penalty which Higuain, looking to complete a first-half hat-trick, rifled against the bar.

The second half continued in much the same vein: Tottenham possession and Juventus counter-attacks, with Mario Mandzukic heading straight at Lloris for the Italians and Kane testing Buffon from distance at the other end.

But while Buffon was equal to Kane's effort, he was at fault when Eriksen's free-kick beat him on the goalkeeper's side of the goal. Despite eight Italian league titles and World Cup medal, the 40-year-old legend took a fateful step inside and couldn't react quickly enough to the Dane's strike.

The equalizer was well deserved and puts Tottenham in pole position going into the second leg.