Cohosts Germany have cruised to a winning start at the world handball championship. However, the match will be remembered more for who their opponents were – a joint Korean national team. 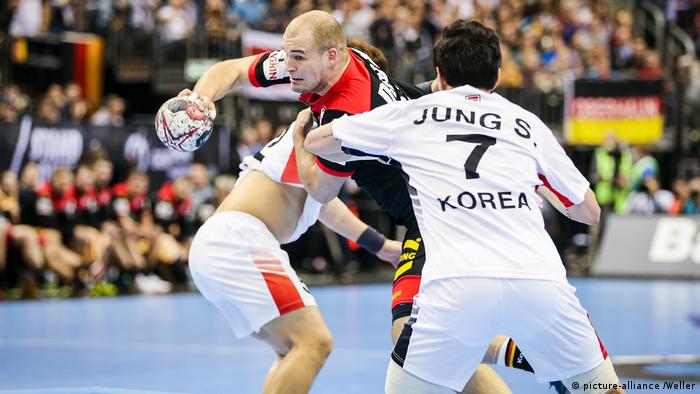 The Germans had little trouble in the opening match of the IHF (International Handball Federation) World Championship, which they are cohosting with Denmark, leading almost from start to finish as they beat the unified Korean side 30-19 in front of a sell-out crowd in Berlin's Mercedes-Benz-Arena.

German coach Christian Prokop told reporters afterwards that he was pleased with his team's performance against a weaker opponent, saying they had done a lot of things right, even if they had failed to capitalize on a number of scoring chances.

His counterpart, Korean coach Cho Young Shin praised the fighting spirit displayed by his team, who are made up of 16 South and four North Koreans.

"Although we were underdogs, our players didn't allow themselves to be intimidated, so for that, I compliment each and every one of them," he said.

However, going beyond their performance on the night, the very fact that the team features players from both South and North Korea is seen as historic – and possibly even a milestone on the road to reconciliation between Seoul and Pyongyang. South Korea's ambassador to Germany, Jong Bum Goo, said he saw Thursday's game as just another piece in a "jigsaw" of reconciliation efforts – almost a year after a joint Korean women's ice hockey team participated in the Winter Olympic Games in Pyeongchang.

Speaking about North Korean leader Kim Jong Un, Jong said in the Thursday edition of the Süddeutsche Zeitung that "he envisions a big picture, and this here is a jigsaw. We are putting a part into this picture. But I can't foresee where exactly that piece will be put."

Jong, who has visited the team since they first assembled as a unit in Berlin on December 22, also pointed to the significance of the team playing in a city that was divided during the Cold War until German reunification in 1990.

"There would be less Korean attention if it wasn't in Berlin. A unified team in Berlin: fantastic. Berlin is a very, very symbolic place for Koreans, a city that was divided but is united since the fall of the wall," he said.