Apart from shrinking the polar bears' natural habitat, the retreat of the Arctic ice sheet is releasing man-made chemicals into the environment. These can have serious consequences on the animals' health. 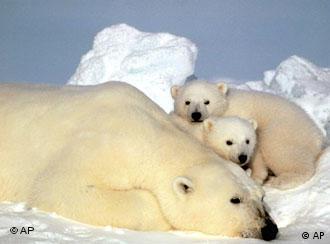 Contaminated ice is a major health risk for the polar bear

The iconic symbol of the Arctic - the polar bear - is under threat from the twin challenges of climate change and lingering chemical pollutants, such as PCBs (polychlorinated biphenyls), which are not breaking down in the region's cold waters.

A comprehensive review of research on polar wildlife published recently in the journal Science of The Total Environment has concluded that the retreat of sea ice cover in the Arctic as a result of climate change could increase the exposure of species such as polar bears to a range of man-made chemical compounds, including flame retardants and substances used to harden plastics.

Scientists believe that lingering pollutants, locked up in the polar ice for decades, could be released into the ocean as the ice cover retreats. According to estimates, annual sea-ice cover in the Arctic in the northern summer is now between a quarter and a third less than it was 30 years ago.

The world's polar bear population is currently estimated to total between 20,000 and 25,000 specimens, despite the Arctic region's vast size. 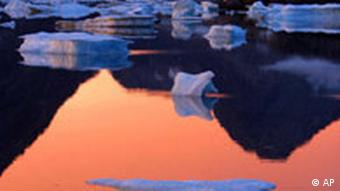 The chemicals don't break down well in the Arctic waters

Polar bears are particularly at risk, according to Bjorn Munro Jenssen, a Norwegian eco-toxicologist and polar bear expert who contributed to the review, because they are at the very top of the Arctic food chain.

The fact that a polar bear's favorite meal is seal does not help matters in any way.

"These contaminants accumulate in fat, and the polar bear only eats the fat of the seals," explained Jenssen. "So they are exposed to huge amounts of fat when they eat one seal - and they eat maybe a few hundred or a thousand seals per year - and then it accumulates."

Jenssen emphasizes that the contaminants involved are toxic, even in low concentrations. They can affect a polar bear's hormone system and immune system, which is likely to have an influence on the animals' overall reproduction and survival rates.

Despite its pristine appearance and lack of population or heavy industry, concentrations of man-made chemical compounds in the Arctic are high. Air and ocean currents, such as the Gulf Stream, bring the pollution of industrialized countries from thousands of kilometers away into the region.

"Climate change will cause a shift in the spreading of the contaminants throughout the world," Jenssen said.

Chemicals "start to condense, and they don't evaporate any more but stay in the Arctic because the temperatures are so low," according to Reinhold Fieler from Akvaplan Niva, a Norwegian environmental consultancy that specializes in the Arctic. 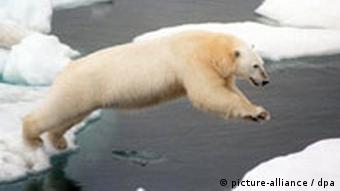 Arctic sea ice is retreating thanks to climate change

"So we have some PCBs and hydro-carbonated substances which are very poisonous and they stay in the area and get into the animals," Fieler added.

He cites the example of chemicals for hardening plastics that are used in personal computers. These chemicals "resemble hormones" and "change the hormone system of the animals, so that some polar bears have actually changed from being female to male."

The good news, according to Bjorn Munro Jenssen, is that as a species, the polar bear has already demonstrated it can adapt to climate change.

"From 9,000 to 6,000 years ago, it was probably much warmer in the Arctic than it is today, and the polar bears survived that period," said Jenssen.

However, he says that the complicating factor of chemical contaminants may hinder this natural adaptation.

Europe's latest satellite, CryoSat-2, has been put into orbit to measure changes in the thickness of ice in the polar region. Deutsche Welle spoke to the mission's proposer and lead scientist Professor Duncan Wingham. (14.04.2010)