Sea ice has delayed the planned helicopter evacuation of a Russian research vessel trapped off Antarctica. More than 70 people remain stuck on the stranded ship after more than a week. 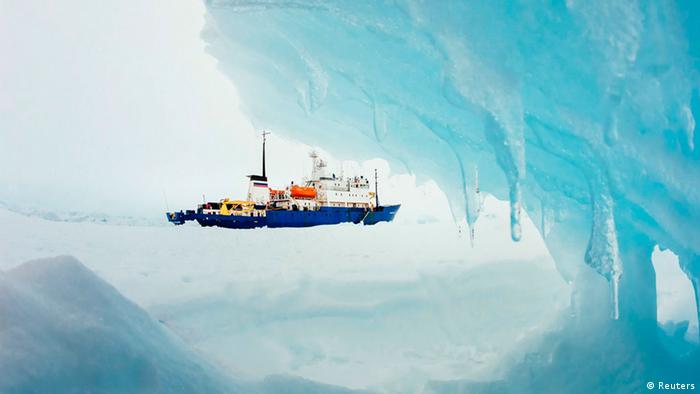 Efforts to rescue passengers aboard the Russian ship, Akademik Shokalskiy, hit a fresh snag on Thursday, as sea ice prevented authorities from using a barge as part of their plan.

"This rescue is a complex operation involving a number of steps," said the Australian Maritime Safety Authority's Rescue Coordination Center (AMSA), which is handling the effort. "Operations in Antarctica are all weather and ice dependent and conditions can change rapidly," the center said in a statement.

The setback is the latest in a string of glitches that mean the 52 passengers and 22 crew members have been stuck aboard the vessel since it became stranded on Christmas Eve.

Three icebreakers - one Australian, one Chinese and one French - were sent to try to smash their way through, but each of their direct rescue efforts had to be abandoned.

The latest plan had involved ferrying the passengers 11 kilometers (7 miles) by helicopter to the Chinese ship - Xue Long, meaning Snow Dragon - before transferring them to the Australian vessel, Aurora Australis, by barge.

However, the 4-kilometer route between the Snow Dragon and the Aurora - which is not equipped for a helicopter landing - became blocked with sea ice before the operation could begin.

Leaving passengers aboard the Xue Long was not a workable option, the AMSA said. "The preferred option is to wait for conditions that will allow the rescue to be completed in a single operation to reduce unnecessary risk."

The eventual rescue operation is expected to involve only the passengers who are on board as either tourists or researchers. All 22 crew members are expected to stay aboard the Russian ship, which is not in actual danger, and which has weeks' worth of supplies on board.