The Category 4 storm dramatically increased in intensity over the past 24 hours and is expected to make landfall in Mexico's Yucatan Peninsula by early Wednesday. Experts have warned of "life threatening" storm surge. 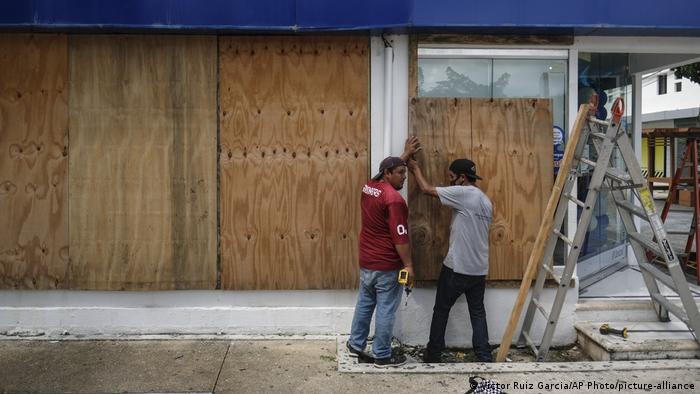 The US-based National Hurricane Center (NHC) described the hurricane as "extremely dangerous," noting that said the storm was "expected to bring a life-threatening storm surge and extreme winds" to the northeastern coast of the Yucatan Peninsula.

Hurricane warnings were in effect for the holiday island of Cozumel and from Tulum to Dzilam Mexico. The NHC said "preparations to protect life and property should be rushed to completion."

The storm's intensity rapidly increased over the past day, growing from a tropical storm to a Category 4 storm in just over 24 hours.

Mexican President Andres Manuel Lopez Obrador said an "order has been given to mobilize up to 5,000 troops with all the necessary equipment to protect the population."

Soldiers were seen wearing masks and face shields while preparing for relief efforts.

Residents in the area hurried to shops to purchase food and supplies and boarded up windows to protect their homes.

Shelters have been set up along the peninsula for tourists who were visiting the resort-studded area, while residents have also been evacuated from coastal areas and transferred to safe locations.

With concerns about preventing the spread of the coronavirus, local authorities said they'd sanitized shelters and opened up additional areas to give people more space to socially distance while riding out the storm.

Joseph Potts, a deputy sheriff from Denver, who was on vacation, said he and his family would be moved to a shelter at a university in Cancun.

"The hurricane kind of popped up overnight and we just want to get it over with and go back to the beach," Potts told the Associated Press.

Southeastern Mexico was already hit over the weekend by Tropical Storm Gamma, triggering floods and landslides that killed six people and forced thousands from their homes.

Threat to the US

Several US states are already rushing to prepare for the hurricane, which is expected to make landfall in the US later this week.

The latest advisory from the NHC expected the storm to maintain its strength after crossing the Yucatan Peninsula and entering the Gulf of Mexico.

The NHC warned of potentially life-threatening storm surges and high-speed winds that could impact the southern US states of Louisiana, Mississippi and Alabama.

"While there is large uncertainty in the track and intensity forecasts, there is a significant risk of dangerous storm surge, wind, and rainfall hazards along the coast from Louisiana to the western Florida Panhandle beginning Thursday night or Friday," said the NHC.

Read more: Insuring against extreme weather in the Caribbean

Alabama Governor Kay Ivey and Louisiana Governor John Bel Edwards both signed a state of emergency for their states that would allow them to seek federal aid quickly if needed.

Beaches along the Alabama coast are still clearing damage caused by Hurricane Sally, which hit the area on September 16. The Gulf Coast was also hit hard by  Hurricane Laura which battered Texas and Louisiana in August.

Hurricane Delta is the 26th named storm to be named this year in an unusually active 2020 Atlantic hurricane season.

The sheer number of storms this year has forced meteorologists to dip into the Greek alphabet to name Atlantic storms for only the second time ever.

Only the 2005 Atlantic hurricane season was more active, with 28 named storms.

The storm system caused three deaths in Cuba and inundated parts of Florida. It came less than a week after deadly storms hit Mexico's Pacific Coast.