A witch hunting craze swept like wildfire through Europe from the 15th century to the 18th. An exhibition in Berlin looks at this hysteria that claimed some 60,000 lives. 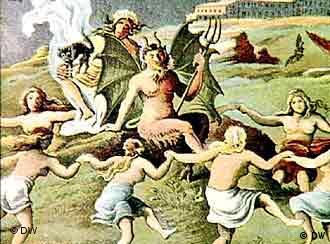 Witches allegedly had orgiastic celebrations with the Prince of Darkness.

The “Spanish boot” would slowly clamp down, breaking the shin bone in several places. The gresilons crushed the tips of the fingers and toes in a metal vice. The turkas pulled off the fingernails, if needles hadn’t been driven under them first.

All these tortures were used to extract confessions from people who had been accused of witchcraft, of consorting with the devil, of bringing misfortune on a village or region.

A new exhibit at the German Historical Museum in Berlin, “Hexenwahn, the Obsession with Witchcraft”, explores the phenomena of the witch hunt in Europe and in particular Germany during the hysteria's long, distructive reign from the late 1400s to the middle of the 18th century.

The exhibition uses sound installations, art works from the time, as well as objects from daily life to paint a picture of a society intent on the suppression of women, on the hunt for scapegoats and little concerned with persecuting its weakest members in the name of God.

"Thou Shall Not Suffer a Witch To Live"

Witchcraft and magic had already been condemned in the Middle Ages. Severe laws, including the death sentence, were passed against them. But many scholars and theologians of the time doubted the existence of witches and regarded such beliefs as superstition.

But in 1484 two Dominican friars, Heinrich Kraemer and Johann Sprenger convinced Pope Innocent VIII to issue a decree authorizing the church to rid Germany of witches. Soon thereafter the two published a guide to witches and demons, the Malleus Maleficarum (The Witch Hammer). It unleased the drive to hunt down alleged witches across Europe, a murderous campaign which lasted 300 years. An example of this notorious work is part of the exhibit.

Supposed witches could be accused of practically anything and were held accountable for nearly every problem. Often their alleged crimes were "traceless", such as sex with Satan, eating unregistered babies from hidden pregnancies, or causing floods, droughts and other natural disasters.

The accused were primarily women, who were seen as evil and unclean and whose weakness left them vulnerable to seduction by the devil. But the exhibit points out that one in four victims were male. Often those were men who had tried to protect accused women from the witch hunters.

Most people accused of consorting with Satan were rural, poor and single. They were often the ones who existed outside the tight constraints of Renaissance village life. Simple dislike, longstanding resentments or even envy could bring about denouncements. They were usually combined with indictments of the suspect's sexual behavior.

"I've considered the accused to be a witch and adulterous whore for the past 38 years." So read the witness testimony at the 1638 trial of Anna Hessen.

What followed was generally torture, forced confessions and finally an almost welcome death for the person accused.

Dark Side of Human Nature

The exhibition cannot answer all of the questions surrounding this complicated social phenomenon. But it does invite the visitor to ponder what exactly moves a society to act as it did, and sometimes still does.

Witch hunts for alleged broom-riding witches may be a thing of the past, but hysterical hunts for victims and scapegoats are very much part of the present. They seem to be programmed into the human psyche.

The Holocaust, the McCarthy Hearings in the United States, the Balkans conflict – all were witch hunts in one way or another, and happened not that long ago. The forms may have changed, the obsession has not.

Watch out for the Witches

On the night of April 30 witches transform the Harz mountains in Germany into a spectacle of heathen ritual and pageantry on what is known as Walpurgisnacht.