Hunger in South Sudan yet surpluses in Uganda

While more than a million people lack food in South Sudan, neighboring Uganda has been harvesting bumper yields. However, the Ugandan traders are stopping food deliveries to South Sudan. 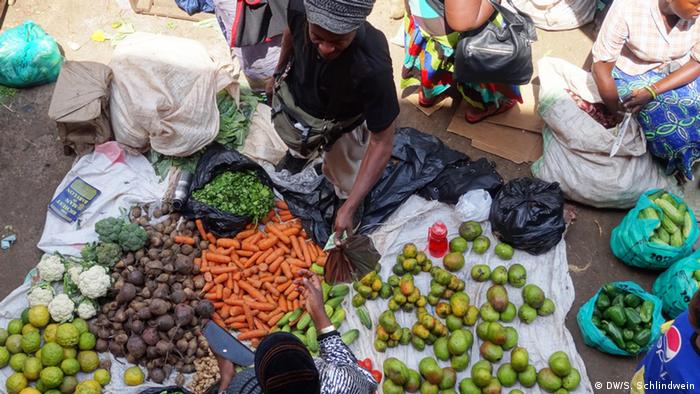 Roy Juma deals in fruit and vegetables and he is haggling over the price of a crate of mangoes. Tomatoes, carrots, bananas and other fruit can be found in abundance in the central market of the Ugandan capital Kampala. The harvests in Uganda this year were plentiful. There is enough to feed not only the local population but also people in crisis-torn neighboring countries such as the Democratic Republic of Congo or South Sudan. In wartime when food is short, this can be a lucrative business. When the fighting starts, local farmers don't feel safe working the fields and agricultural production collapses.

The United Nations is warning of an imminent famine in South Sudan. A large section of the population has been displaced since fighting broke out in December 2013. Agricultural production in South Sudan is now almost at a standstill. The World Food Program (WFP) is flying in food supplies, most of which come from overseas. At the same time markets in neighboring Uganda are well-stocked and the granaries are full. In the past, it was customary for Ugandan traders to sell produce to South Sudan, even in time of war, but business has now stopped. 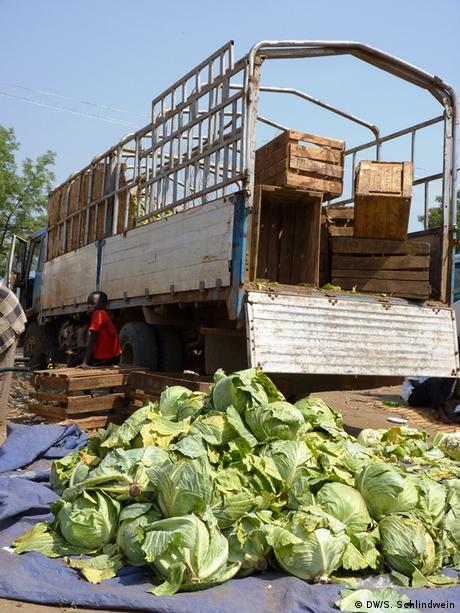 Juma explains that he charges extra for sales in war zones and he won't deliver everywhere. "I'm still making deliveries to the capital Juba and I charge more than I do here. A colleague of mine makes deliveries to Bor, which is some 200 kilometers (124 miles) further away. A two ton truck costs $1,500 (1,100 euros) a day. So how much would I have to charge for the produce I deliver in order to make a profit?" he asks rhetorically.

No sales to South Sudan

It is a high risk business, but it can carry substantial financial rewards for the Ugandan traders. During the 20 year civil war between northern and southern Sudan, every tomato, egg and onion was imported from Uganda. That was in the past. Uganda's dealers have now decided to stop doing business with South Sudan, according to Issa Sekitto from the Kampala City Traders Association.

He said the reason dates back to the time before the latest fighting started. The South Sudanese government had ordered food for its army, but had not paid for it. The government owed Ugandan traders $40 million and there would be no more deliveries until this debt was paid off.

The traders said they were prepared to block the borders and attack UN vehicles in order to press home their demands, Sekkito claimed. "Whatever they are fighting for in South Sudan, they will have to pay us," he said.

The dispute about unpaid bills is just one of many reasons for the food crisis in South Sudan. The rainy season has made many roads impassable. Half the country is now swamp land. Even if Uganda's traders were to resume deliveries, parts of South Sudan would inaccessible to them. The WFP supplies the needy in outlying regions by air, but this is expensive, their spokeswoman Lysia Wamala said. 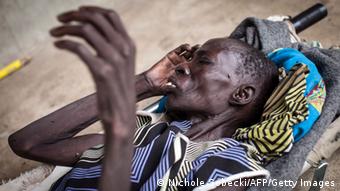 Food supplies from overseas arrive in containers at the Kenyan port of Mombasa. They are taken by truck through Uganda and on to South Sudan. "Our biggest challenge is a lack of money, we only have half of what we really need," said Wamala. The WFP supplies food not only to the needy in South Sudan, but also to South Sudanese refugees in Uganda as well. Those refugees currently number 116,000 and the UN expects that figure to grow to 150,000 by the end of the year.

Uganda is currently hosting more than 300,000 refugees, most of whom come from South Sudan or the Democratic Republic of Congo. This is the biggest influx since the genocide was raging in Rwanda twenty years ago. It is clearly a challenge to feed more than a quarter of a million extra people, but the region is fertile enough and nobody need go hungry - as long as peace prevails.

Strife in South Sudan has been ongoing since 2013. Hundreds of thousands of refugees have tried to escape the humanitarian crisis by fleeing to neighboring Uganda. Now camps there are struggling to cope. (08.08.2014)

Machar: 'I don't know when peace is coming'

In an exclusive interview with DW, South Sudan's rebel leader Riek Machar talks about the prospects of peace in the country and his feelings about the proposed arms embargo. (13.08.2014)

Envoys from the United Nations Security Council have warned the feuding factions in South Sudan that they will face sanctions if they do not end the civil war they are fighting. (13.08.2014)