Hungary vs EU: Is Orban striving for Huxit? 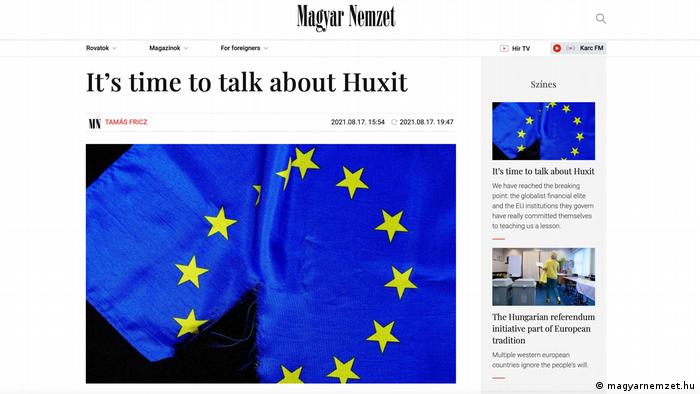 The English version of the "Magyar Nemzet" Huxit op-ed

Hungary's unofficial government newspaper Magyar Nemzet (Hungarian Nation) often floats issues that Prime Minister Viktor Orban and his government would like to gauge public opinion on without addressing those issues themselves. Last weekend, it happened again. On Sunday (August 15), the paper opened debate on an issue that had previously been deemed off-limits even in Hungarian government circles: Hungary's exit from the EU.

"It is time to talk about Huxit" was the title of the Magyar Nemzet opinion piece. The news went off like a bomb in Hungary — with most larger media outlets reporting, opposition politicians up in arms and pundits expressing concern. It was hardly surprising, for in spite of deep political divides, social and cross-party consensus held that the country's rightful place was in the European Union. Until now, that view had been one of the very few things most Hungarians could agree on.

Now, however, for the first time since Orban came to power in 2010, Hungary's exit from the EU is being openly broached by the government's most important news outlet. It is a situation without precedent.

The official English version reads: "[T]he time has come, now in July 2021, to seriously consider the possibility of our withdrawal from a union of states with a thousand bleeding wounds, showing imperial symptoms, and treating the eastern and central European countries incredibly arrogantly." The reason given: "Our paths have diverged as the West now consciously ( … ) breaks from Christian morality and values. Instead, they aim to build a cosmopolitan, faceless world society based on the unbridled self-enjoyment and self-destruction of the individual ( … ). [By contrast,] we Hungarians, Poles and central and eastern European people hold on to our cultural and religious foundations." 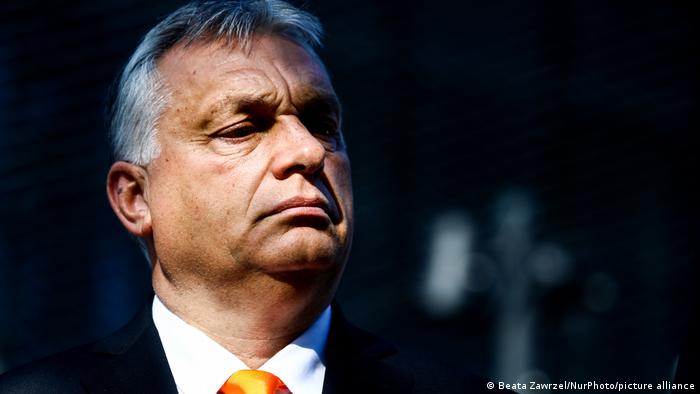 The op-ed was written by Tamas Fricz, a political scientist known for radical and often crude, extreme-right views. But Fricz is no political outsider. Rather, he is a leading member of several important Orban-affiliated organizations, including the Forum of Civic Alliance (COF), which periodically stages "peace marches" — demonstrations of power by the Orban government with tens or even hundreds of thousands of participants who lend their ears to speakers engaging in harsh anti-EU rhetoric.

But that is not the only indication that government circles had been informed about Fricz' op-ed in advance — or possibly even coordinated its thrust with him. Over the past couple of weeks, the Huxit issue has also been latched onto by various Hungarian politicians, if only implicitly. 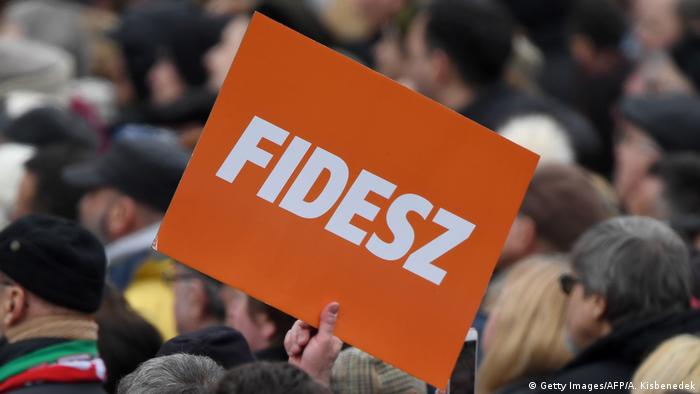 The EU — an 'intellectual morgue'

Hungary's Speaker of Parliament Laszlo Kover — second only to the president in terms of protocol — said in an interview at the beginning of July that unlike the 2003 referendum on EU membership that took place a few months before the bloc's major eastern enlargement in May 2004, he would "definitely vote no" in a referendum on EU membership today.

At the end of July, Hungary's Justice Minister Judit Varga paraphrased a statement made by German Christian Social Union (CSU) politician Peter Gauweiler and printed in Germany's Frankfurter Allgemeine Zeitung newspaper, saying the EU was "no longer a refuge but an intellectual morgue."

Finance Minister Mihaly Varga, in turn, said during an interview last week that he would vote "yes" in a referendum on EU membership. Still, he added, by the end of the current decade, at which point Hungary will have become a net contributor to the EU, people might see the issue differently. 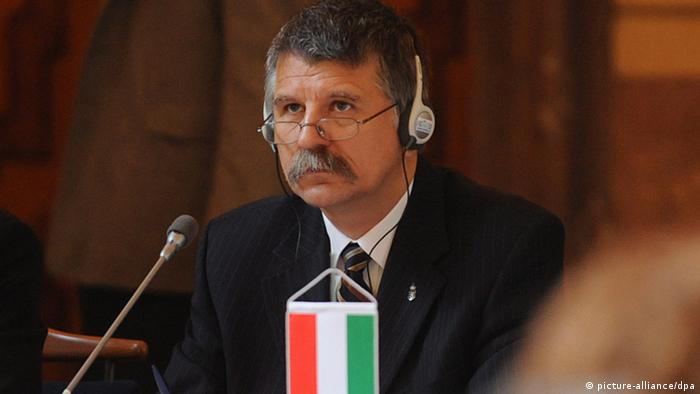 Hungary's Speaker of Parliament Laszlo Kover voted to join the EU in 2003; now he wants out

'A life outside the EU'

Likewise, Viktor Orban himself has occasionally spoken of the issue, most recently in 2016 in connection with Brexit, saying "of course [there is] a life outside the EU." Orban has not yet contributed anything to the current Huxit debate. During the last couple of years, however, he has been embarking on an increasingly open and aggressive collision course with the EU — most recently with a law that bans so-called "homosexuality or sex reassignment propaganda for minors" that was harshly criticized by Brussels. On such occasions, Hungary's PM has been increasingly clear about his rejection of the EU in its current form.

Consequently, Hungary's opposition politicians presume Orban and his inner circle were the real instigators behind the Magyar Nemzet op-ed. "Orban's campaign for the exit of our home country out of the EU has begun," wrote Left-Green politician Timea Szabo of the Dialogue for Hungary party (Parbeszed Magyarorszagert) on Facebook. "From now on, those who vote for Orban vote for the end of our EU membership." Similar statements were made by politicians from virtually all other opposition parties. 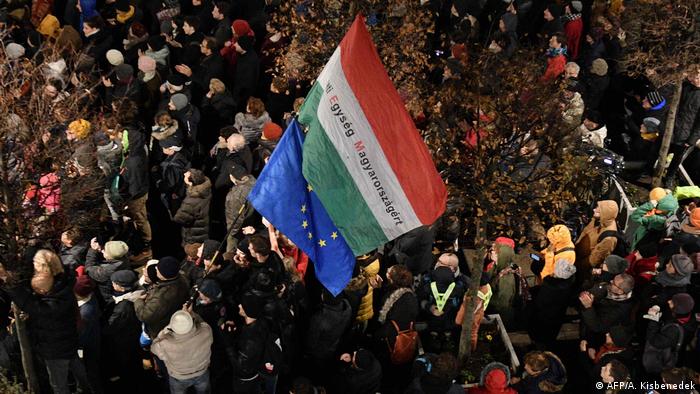 "Are we now, in a display of insurgent defiance, shutting the door on which we used to knock in order to be given permission to enter?" asked conservative writer Balint Ablonczy, who concluded: "From now on, there can hardly be a more important issue in Hungarian politics."

Budapest-based political scientist Peter Kreko told DW that an exit from the EU was not yet in Orban's interest. "He is, however, interested in turning public opinion against the EU in order to potentially blackmail Brussels with the threat of a possible Huxit. In this regard, his aim is to aggravate hostility towards the EU in Hungary." 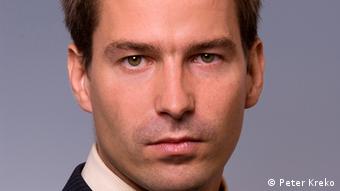 One of his tools is the allegation that Hungary is receiving increasingly less money from the EU. That suggests the country is therefore unable to gain any more advantage from EU membership, added Kreko, who is currently a fellow at the Institute for Human Sciences (IWM) in Vienna. According to opinion polls, Hungarians regarded EU funding as one of the key advantages of EU membership.

"Nevertheless it should be pointed out that the vast majority of Hungarians have, in principle, a very firm pro-European attitude," Kreko said. "Even a decade of ever-increasing EU skepticism and increasingly vulgar anti-EU propaganda issued by the Orban government has not been able to change that."

Given that parliamentary elections are scheduled next spring, it could, therefore, "be a tactical error to exaggerate anti-EU propaganda," said Kreko, as this could drive undecided voters with a pro-European attitude into the arms of the opposition.

The assorted reactions to the Magyar Nemzet op-ed make one thing evident: With an open Huxit debate, Hungarian leader Viktor Orban may just divide his country once and for all.