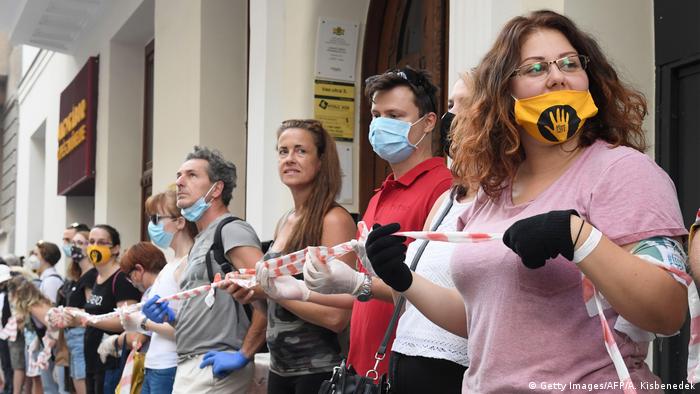 Thousands of people formed a human chain across central Budapest on Sunday to demand independence for universities in Hungary.

The chain stretched over several kilometers, running from the University of Theater and Film Arts in the city center to the parliament building on the Danube River.

Student representatives at the university launched the protest after the right-wing nationalist government of Viktor Orban revoked the institution's autonomy. Last week, the university's elected board was replaced with an advisory board consisting of people close to Orban and his government.

Attila Vidnyanszky, a confidant of the prime minister who favors a Christian-nationalist Hungarian culture, took over as head of the new board. He has also led the National Theater since 2013.

Campus occupied for nearly a week

Protesting students have occupied the university since Tuesday and are calling for Vidnyanszky's resignation and for the elected board to be restored.

Students on Sunday passed a document, hand to hand, declaring the school's principles and future goals, which is to be presented to lawmakers.

Many top professors at the university have resigned as well as its leadership. Actors, musicians and artists, as well as other educational establishments, have expressed their support for the cause.

The 155-year-old institution has several Oscar winners among its alumni, including Michael Curtiz, the director of Casablanca, and Vilmos Zsigmond, the cinematographer for Close Encounters of the Third Kind.

Over the past few years, Orban's government has handed several key universities to private foundations that are loyal to the government.

The government claims the new structures will increase educational quality and make the institutions financially independent, but critics overwhelmingly view the reforms as attempts to bring the schools ideologically closer to the administration and limit their autonomy.

Students have marched in support of a university founded by US-Hungarian billionaire George Soros in Budapest. Central European University has said it will move abroad unless a government legal dispute is resolved.

Hungarian teachers were joined by other unionized workers in protesting the government's bid to centralize public education. This is not the first time thousands have protested Orban's government, but he remains popular.