For diplomats, media appearances can be a balancing act, knowing how to state key messages in a clear and tactful way. At a media training workshop in Budapest, diplomacy students learned how to do just that. 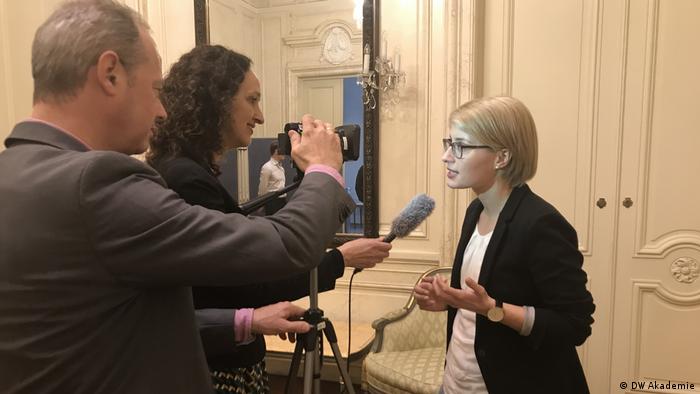 On camera: Annabell Karsten responding to questions in a mock interview

"Pay close attention – you’ll be needing these skills!" calls out Ulrich Schlie to 34 eager students in the university's lecture hall. Schlie is the academic chair of the Diplomatie II program at the Andrássy University in Hungary's capital.

The university is unique, not only in terms of Hungary's academic landscape but because it is the only one outside of German-speaking countries where all courses are conducted in German. Classes are often practice-oriented and communicating with the media is part of the curriculum.

"You're good on camera!"

Darren Seifert is from Germany and doing a master's in international relations. "When you're focusing on this it's important to spend time abroad," he says, and is a reason he decided to study here; another is that the master's degree is accredited both in Germany and Hungary.

The workshop's first exercise is on how to give statements. Seifert spent several months in Russia as part of his bachelor's degree, and for his statement chooses the US' withdrawal from the INF nuclear arms treaty with Russia.

He has 30 seconds in front of the camera to state Germany's official position. It's a challenge but he succeeds the first time round. 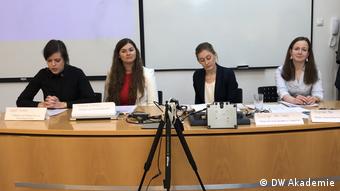 Interview training is next on the list, where students have three minutes to deliver their core message. Annette Karsten, also from Germany, chooses to be interviewed on unaccompanied refugee minors.

Still, it's not easy for her even though she is familiar with the topic and spent two years working in child protective services. "It looks easy when you see others on TV, but it's not the same when you're facing the camera yourself," she admits.

Karsten is enjoying the program because it brings German and Hungarian students together. The main attraction for her, though, is that the classes are small. "There are times when only three or four students attend a lecture, so it's more personal and you learn a lot more this way," she says.

As with the other participants, Karsten receives individual feedback on her performance. "It was incredibly helpful. They encouraged me to smile and use my hands more," she says. 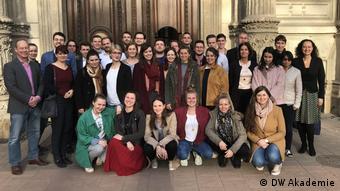 "It's important to come across as a professional and to have good arguments," Wiesler stresses, "but it's just as important to be genuine and credible. This isn't just true for aspiring diplomats but for anyone who appears in public."

After graduating, Seifert aims to work for Germany's Federal Foreign Office. "I’m currently applying for the attaché training program in Berlin," he smiles, "so we'll see how that works out!"

It is difficult to get into the program but if he does, Seifert will likely see DW Akademie trainers again next year. DW Akademie's Media Training has long been a core component of the Foreign Office's diplomatic training program.

"That's a much more intensive program," Wiesler points out, "because diplomats work in crisis situations and need to move around safely on the international stage."