Hungarian PM Viktor Orban has called a proposed migrant quota plan to distribute refugees among EU member states 'absurd.' He also said the debate on the death penalty in Hungary was a matter of 'freedom of thought.' 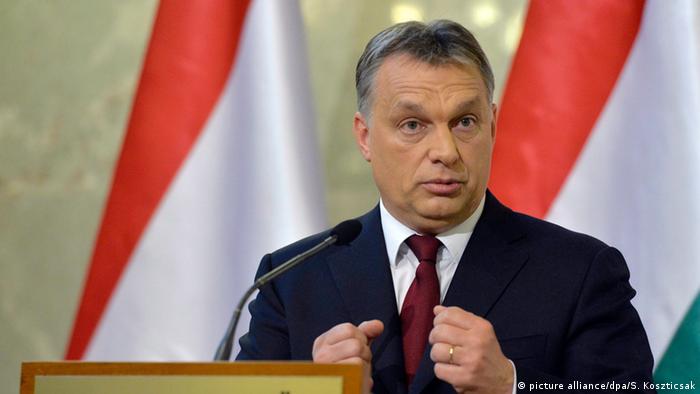 Hungarian Prime Minister Viktor Orban lashed out on Tuesday against EU proposals for migrant quotas, and defended his country's right to debate the reintroduction of the death penalty.

Speaking before the European Parliament in Strasbourg, France, Orban was blunt about a proposed quota plan for migrants in the EU.

"The proposal on the table from the European Commission…is absurd, bordering on insanity," Orban told lawmakers. "Quotas are only going to bring more people to Europe. It is an incentive for people traffickers and will simply tell people: yes, try to cross the Mediterranean at all costs."

The EU announced plans last week to distribute asylum seekers and migrants more fairly among its member states and take in 20,000 more refugees following the deaths of thousands of people trying to reach Europe via the Mediterranean.

"Member states have to protect their own borders. I think it's insane to propose letting in all immigrants to Europe," Orban said.

Doubling down on death penalty

"As far as capital punishment is concerned, I don't want to put my head in the sand," Orban said. "This is not about the death penalty… This is about freedom of expression and freedom of thought," he added.

Orban's stance drew a sharp rebuke from Guy Verhofstadt, leader of the Alliance of Liberals and Democrats for Europe in the European Parliament.

"It is a European issue. It's not an issue of member states, it's an issue of the whole European Union," he said.

"Don't make a caricature of the plans of this Commission, because we're on the same page," Timmermans said regarding the EU migrant quota plan.

The United Nations refugee agency has said it is worried about Hungary’s right-wing government trying to portray refugees as a threat. The number of asylum seekers in the country has risen over the last few months. (09.05.2015)

EU readies for refugee quota plan amid opposition from some members

As Europe braces itself for a new deluge of refugees, the EU plans to introduce a quota system to distribute migrants across its member states. But some countries have already begun rejecting the scheme. (08.05.2015)