Thousands of anti-capitalist protesters defied a demonstration ban in Frankfurt on Friday. Hundreds were arrested. Organizers are hoping many more will turn out for an officially approved demonstration. 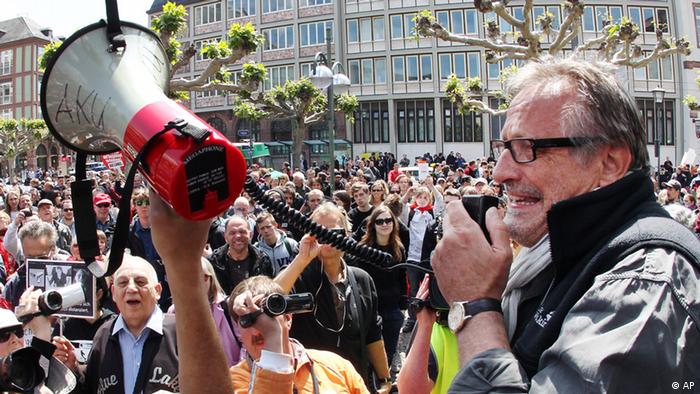 Police moved in quickly to breakup gatherings in front of several large private banks and the European Central Bank (ECB).

The four days of protests were organized by a group calling itself “Blockupy Frankfurt.” However, while the authorities gave the go-ahead for a dance party on Wednesday and a rally on Saturday, they banned the protests scheduled for Thursday and Friday. Around 5,000 police officers were deployed on the western German city's streets to enforce the bans. Many of them were brought in from other German states.

On Wednesday police removed demonstrators who had been camped outside the ECB as part of the "occupy" movement, and on Thursday arrested 150 protesters for defying the demonstration ban.

Despite the higher number of arrests on Friday there were no reports of violence, and there appeared to have been little disruption to some of the protesters' main targets.

"Our operating business is not curtailed. We were well prepared," a spokesman for the large German private bank, Commerzbank, told the Reuters news agency.

Police also sealed off the headquarters of Germany's biggest lender, but a Deutsche Bank spokesman said its business was unaffected.

Fearing the worst, some shops on Frankfurt's main shopping street boarded up their windows and closed for the day, although no damage was reported. Traffic in the downtown core was severely disrupted due to the police blocking off several key thoroughfares in anticipation of the protests.

Despite their apparent failure to disrupt their main targets, organizers deemed Friday's action a success.

The organizers say they hope tens of thousands of protesters will turn out for the final rally on Saturday.