As it opens its new ethnological museum, Berlin's Humboldt Forum has reacted to criticism surrounding its handling of colonial history. Will critics approve? 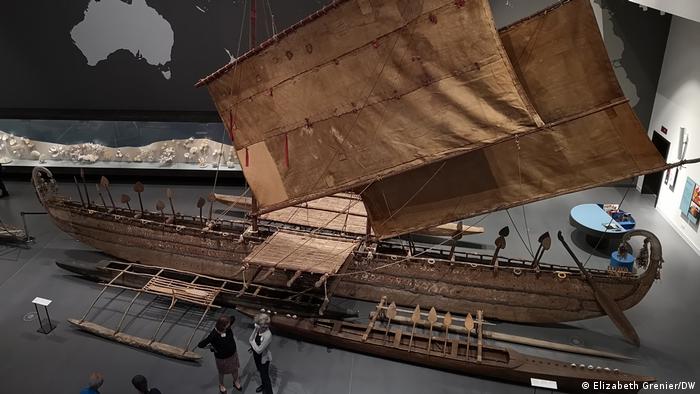 A centerpiece of the new museum, the violent history of the boat from the Luf island has only recently been exposed

Even before opening, Berlin's Humboldt Forum was embroiled in controversy for years. Beyond the public backlash related to its building costs of €680 million ($800 million), the state-of-the-art museum has been at the center of a debate surrounding the colonial-era items filling its exhibition halls.

The curatorial team's efforts to tackle the thorny issue are manifest as the Humboldt Forum now inaugurates two new sections. The museum halls feature some 20,000 African and Asian artifacts, which used to be housed in the Ethnological Museum and the Museum of Asian Art in Berlin's district of Dahlem.

Before the opening event, the museums were introduced to the press on Monday.

Keywords such as provenance research, digitalization of the collection, transparency, transcultural projects and restitution were at the core of the presentation speeches of the three directors of the institution: Hartmut Dorgerloh, director and chief executive officer of the Humboldt Forum; Hermann Parzinger, president of the Prussian Cultural Heritage Foundation; and Lars-Christian Koch, director of the Ethnological Museum and the Museum of Asian Art. 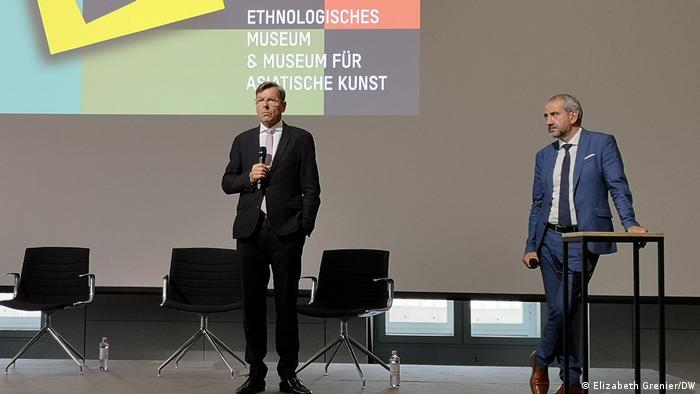 Addressing the difficult history of the exhibits should not be seen as a burden, but rather as "a true opportunity for a new intercultural dialogue," Parzinger said.

The museum is "fundamentally willing to restitute exhibits," he added, mentioning among other cases the infamous Benin Bronzes, which will be restituted in 2022 following a brief exhibition in Berlin next year.

Some of the pieces that are currently in the museum, Parzinger added, "may one day no longer be here, but that's part of this process and the result of this process is precisely that museums will be completely redefining themselves."

This appears to be a change of tone from the director, who previously preferred to use the term "circulation of items" over their actual restitution.

The topic of restitution was also taken up during the opening event on Wednesday. In his address to attendees, German President Frank-Walter Steinmeier asked for more dialogue when it comes to the topic of looted art. He said all Europeans must "overcome some patterns of thought and perceive and allow other perspectives." This also means talking to the countries and regions from which the artifacts originate, he clarified. Steinmeier also called for a reappraisal of Germany’s colonial past. "The truth is: when it comes to the colonial era, we Germans, who are otherwise so historically aware, have all too many blanks. We have blind spots in our memory and in our self-perception."

Speaking after the German president was award-winning Nigerian author Chimamanda Ngozi Adichie, who expressed similar sentiments. On the topic of art restitution, she called for fewer drawn-out discussions and more concrete actions, including more conversations with societies of origin. "We can’t change the past but we can change our blindness towards the past," she said.

She also praised the decision to return the Benin Bronzes. Her impassioned speech was met with enthusiastic applause from the audience.

Additional permanent positions have also been created to pursue the restitution process. As the new officer for transcultural cooperation, Andrea Scholz described her duty as "further pushing the door open, even if it means that the institution needs to be reformed a bit." 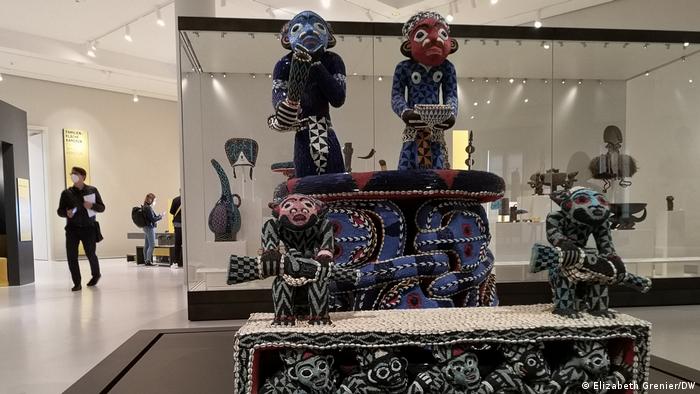 Cameroon's Mandu Yenu throne was "a gift" to the German emperor. But what were power relations in the former colony?

This responsibility, Scholz told DW, is shared with a new team of four provenance researchers. Set up in November 2019, it is led by researcher Christine Howald, who pointed out at the Monday press conference that, considering the thousands of items in the collections, they have their work cut out for more than a few lifetimes.

Priority is, however, given to "items coming from the context of German colonialism," she said, "as well as culturally sensitive items and human remains."

A reexamination of colonialist perspectives

Among the efforts to address the loaded history of the collections is a free booklet that guides through the postcolonial provenance research related to the permanent exhibitions of the new Ethnological Museum and the Museum for Asian Art.

Provenance information is also made available through QR codes in the museum, and multimedia stations broach the issue of colonialism for children.

The temporary exhibition that opens the new Ethnological Museum was also designed in reaction to ongoing criticism. It focuses on traces of colonization in the former German territories of Cameroon, Namibia and Oceania.

Titled "Matter(s) of Perspective: An Overture," the installation examines the ways of seeing that not only contributed to colonialism, but still shape Western views today, quoting sociologist Robin DiAngelo's bestselling book, White Fragility: Why It's So Hard for White People to Talk About Racism (2018). 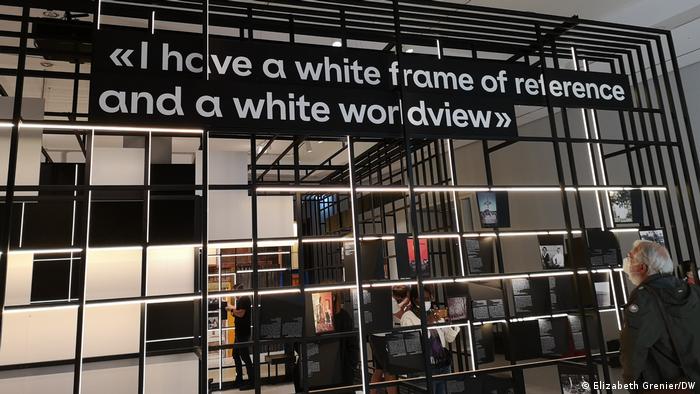 The first exhibition quotes "White Fragility," a bestseller on race relations, as an opening statement

Another temporary exhibition presents the results of a collaborative partnership between researchers from Berlin and the Museums Association of Namibia, looking into the Herero and Nama genocide. It includes work from internationally renowned Namibian fashion designer Cynthia Schimming.

But will the Humboldt Forum's defensive efforts convince critics? 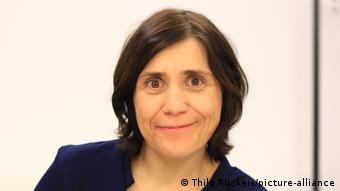 Savoy, who resigned from an advisory board of the Humboldt Forum in 2017 in disagreement with the museum's way of dealing with colonial history, warned against "false transparency" that can be read in the institution's approach.

In her view, the museum's attempts to be transparent, which only came "following enormous public pressure," is "really not enough," she said. "It has to be honest transparency."

She pointed out, as an example, the euphemistic vocabulary used in the exhibition's short 500-character labels, which primarily describe violent colonialists as collectors "serving" in the German army.

"It's creating fog with words. That's almost worse than not having anything at all," she said.

One of the most impressive exhibits of the Ethnological Museum is a 15.2-meter (50-foot) boat that was transported from the Island of Luf (part of today's Papua New Guinea) to Berlin in 1904.

Historian Götz Aly looked into how the boat landed in the Berlin museum. His book, Das Prachtboot (The Prestige Boat), describes the German army's massacre on the island, which took place 20 years before the boat was actually acquired.

Aly said it was "unbelievably easy" to find information on Germany's impact on the island, especially compared with his previous work, on the Nazi era, where documents have largely been destroyed. "It was precisely documented and the files are all there," he told DW at the Berlin literature festival. "But no one was interested." 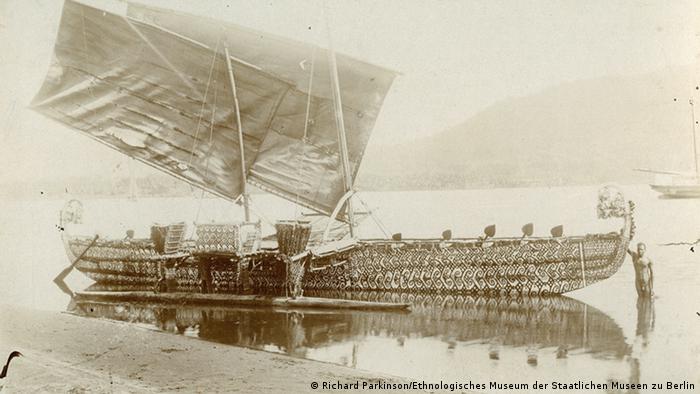 Several others boats from Luf Island were destroyed by German colonialists

Published in May, Aly's research was another bombshell for the Humboldt Forum. During a tour for the press in June, the institution was criticized for not addressing the violent colonial history related to the boat that had been uncovered by the historian.

Meanwhile, the museum has reacted by sending a filmmaker, Martin Maden, to search for leftover traces of the culture that was decimated by German colonialists.

Maden actually managed to track descendants of the people who built the Luf Island boat. For now, the successors are not reclaiming the boat itself, lacking resources for its preservation and display, but they have stated their interest in regaining their lost tradition: "The knowledge has to be brought back to us," says Stanley Inum in the film that is part of the exhibition, adding that they plan to come to Berlin to examine the boat in order to build a new one.

Maden and Aly have both been invited to discuss their findings on the Luf Island boat at the museum on October 20.

Acceptance for the paradigm shift?

There will always be space for improvement in what the museum has described as an "ongoing process," but provenance researcher Christine Howald feels that the "paradigm shift has now been absolutely accepted" within the institution.

"For curators, it is clear, it is no longer a question of preserving the collections forever," Howald told DW. "We want to restitute where we should restitute, and even in cases of legitimate acquisitions when items are simply culturally important for another society. Many steps have been taken in this direction."

This article was updated on Sept.22, from a previous article published on Sept. 20.

Berlin's Humboldt Forum is caught between provenance research and the debate over looted art. Right in the middle: Jonathan Fine, head of the Ethnological Museum. We accompanied him at work and on a 2017 trip to Cameroon

The debate around looted art has intensified just as Berlin's new museum opens. The museum has been criticized for the colonial-era African pieces in its collection.

The beauty and horror of ivory art

In its opening exhibition "Terrible Beauty: Elephant — Human — Ivory," the new Humboldt Forum in Berlin sheds light on a deadly business that has been around for millennia.