Humanitarian crisis in Gaza intensifies under Israeli attack | World| Breaking news and perspectives from around the globe | DW | 15.05.2021

About 10,000 refugees with no way out: The situation for the civilian population in the Gaza Strip is becoming increasingly desperate. Relief aid is in short supply — and the territory is battling the pandemic, as well. 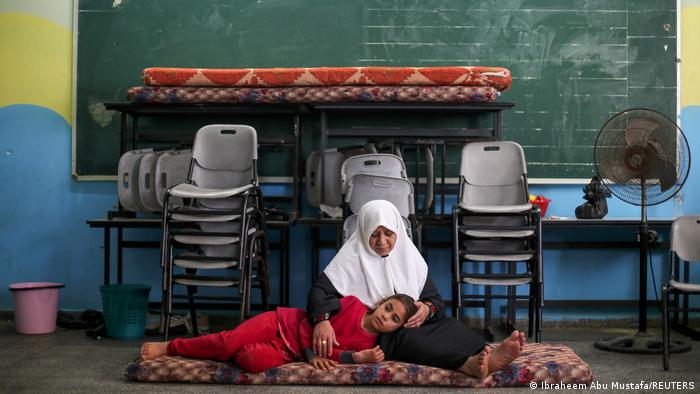 Palestinians in Gaza have sought shelter from Israeli attacks in schools

The Israeli air force sometimes issues warnings when it's about to bomb targets in Gaza to give the civilian population time to take cover. But, a military spokesman said, that wasn't possible when airstrikes targeted what officials said was a network of Hamas tunnels on Friday.

The Palestinian Islamist group Hamas, which has been in political control of the Gaza Strip since 2007 and is designated as a terrorist organization by the US and the EU, deliberately integrates its military structures into civilian facilities, Israeli officials say, presumably in order to make the military reconsider strikes on areas where civilians are. Around 2,000 rockets have fallen on Israel since Monday, the majority of which were fired from residential areas in the Gaza Strip.

As in previous violent clashes in the conflict between Israelis and Palestinians, the situation of the civilian population in the Gaza Strip has again deteriorated this week. According to UN figures, some 10,000 people there have already left their homes for fear that an Israeli ground offensive is imminent.

Israel Hamas conflict: Is there a path to de-escalation?

Eight children from the one family killed

What sets refugees in Gaza apart from those in all other conflict regions of the world is that their escape route is cut off by the fence along the border. Without a permit issued by Israel or by its southern neighbor, Egypt, there is no way they can leave the 360-square-kilometer (140-square-mile) patch of land.

Sixteen schools run by the UN Relief and Works Agency (UNRWA), which provided humanitarian support to refugees in the Palestinian territories, were converted at short notice into emergency shelters. Matthias Schmale, UNWRA's director with responsibility for Gaza, says the agency's first task was to support the people on the ground. "We will do what we can to provide these internally displaced persons with essential support," he told DW.

Around 140 people have been killed and 1,000 injured in the Gaza Strip since the Israeli air strikes began. According to Palestinian aid workers, in the early hours of Saturday alone 10 members of a single extended family, including eight children, died in an attack on a house in the Shati refugee camp.

"They weren't carrying weapons, they weren't firing rockets," said the father of four of the children. They were killed, he said, "wearing their best clothes for Eid al-Fitr," the "Sugar Feast" holiday Muslims celebrate at the end of the fasting month of Ramadan. 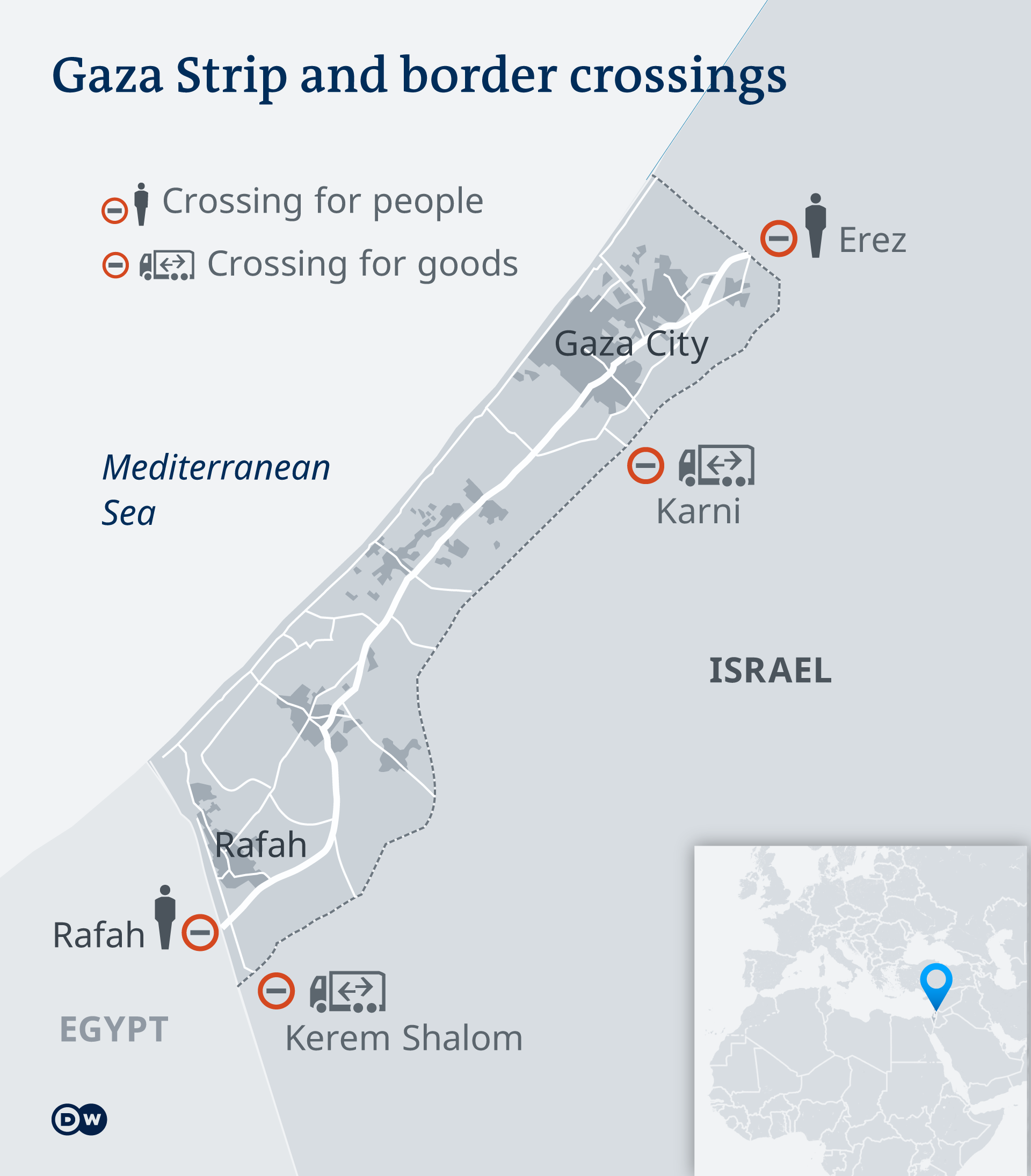 Many goods in short supply

The attacks also complicate the work of aid organizations, which much of the civilian population in the Gaza Strip relies on. In 2019, according to an assessment by the UN Office for the Coordination of Humanitarian Affairs (OCHA), 75% of Gaza's population of 1.6 million was dependent on food supplies, and a third of basic medicines were unavailable.

Electricity and drinking water are permanently scarce commodities. And because the border crossings with Israel have been completely closed since May 10, no fuel is being delivered. Diesel is already in short supply, a fuel that is urgently needed – for ambulances and electricity generators, among other things.

At least there still seems to be an adequate supply of basic foodstuffs, the UNRWA's Matthias Schmale told DW. However, he's worried this could change "if people flee their homes and have to stay in emergency shelters or with relatives." Water, too, could quickly become a scarce commodity.

In addition to the need for urgent support, Schmale comments that after 14 years of the Gaza blockade, the 2018/19 border protests, and now the COVID-19 pandemic, people are going to be more in need than ever of psychological help: "We mustn't lose sight of that. If thousands of people are housed in shelters, there will also be gender-based violence, and children will experience stress. So we need to think about that, too, and consider people's mental health." 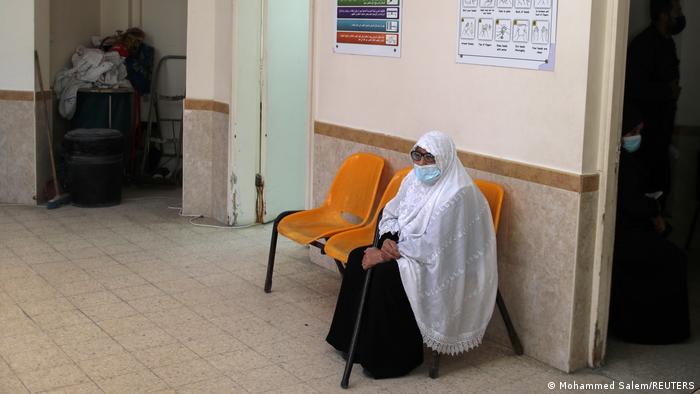 To make matters worse, Gazans also have to cope with the latent threat from the coronavirus. The B.1.1.7 variant, which first appeared in the UK, has driven a second wave of the pandemic in the Gaza Strip. Vaccinations there have begun – but while in Israel 62% of the population has already received at least one dose, only 5% of people in the Palestinian territories have received a vaccination.

As of early May, according to Doctors Without Borders, the Gaza Strip, which is much smaller and has fewer residents than the West Bank, accounted for more than 60% of active cases of COVID-19 in the Palestinian territories. There are currently more than 1,000 new infections there per day, and the hospitals were already full before this week's violence.

The new military escalation started just as there were signs that the second wave might be nearing its end.

"It started to become manageable," Schmale said of the situation in the hospitals. "As far as I know, they can treat the injured. But, of course, if this continues, and if there's a ground offensive, the hospitals will very, very quickly reach the limits of their capacity. And that would be a serious humanitarian problem."