Suspending aid shipments to Syria is a "security measure," the UN and Red Cross organizations have said. Some 20 civilians, including aid workers, were killed in airstrikes on an aid convoy. 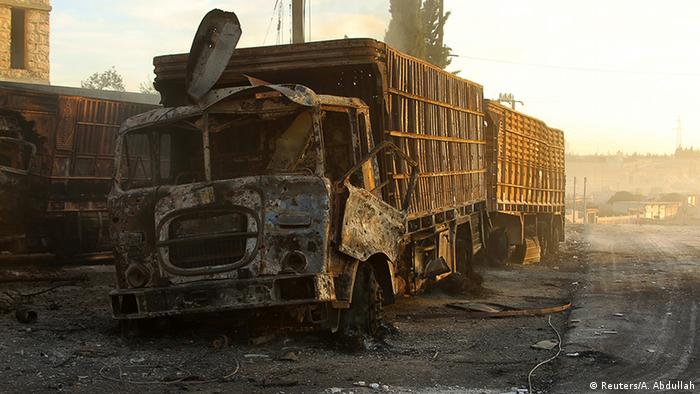 The United Nations (UN) and International Committee of the Red Cross (ICRC) said on Tuesday that they were temporarily suspending all aid deliveries to Syria.

The Syrian army has resumed airstrikes on Aleppo, killing at least 32 people while apparently also targeting aid deliveries. A weeklong ceasefire had been declared over just hours earlier.

The Syrian army has accused 'terrorist groups' of undermining a ceasefire brokered by the US and Russia. The 'cessation of hostilities' aimed at securing peace talks for a political solution to the five-year conflict. (19.09.2016)

Russia decried Washington's "persistent refusal" to work with the Kremlin after US airstrikes killed dozens of Syrian soldiers, apparently mistaking them for terrorists. The incident could end the peace deal on Syria. (18.09.2016)

The announcement followed air strikes hitting a 31-truck aid convoy near Aleppo late on Monday evening. The Red Cross said on Tuesday that the strike killed 20 civilians, including an ICRC staff member.

"As an immediate security measure, other convoy movements in Syria have been suspended for the time being pending further assessment of the security situation," said UN humanitarian aid spokesman Jens Laerke.

"It is a very, very dark day… for humanitarians across the world," Larke added.

Despite the suspension, Laerke stressed that the UN was committed to helping those caught in conflict.

"We see a resumption of violence, an intensification of fighting in many locations," said Robert Mardini, ICRC director for the Middle East. "We had something planned in the four towns, but for now it is put on hold to reassess the security conditions."

"If this attack is found to be a deliberate attack, it would amount to a war crime," Stephen O'Brien, UN emergency aid chief, said.

German Foreign Minister Frank-Walter Steinmeier urged world leaders to see if there is a way back to negotiations for a ceasefire "or whether this (path) has already become hopeless."

"I certainly hope that it is possible to deescalate the situation. But I cannot be sure at the moment," Steinmeier added.

This latest incident severely damages hopes of further cooperation between the two superpowers and reduces the chances of a renewed ceasefire agreement in the near future.

The convoy, made up of UN and Syrian Arab Red Crescent (SARC) aid trucks, was delivering aid for 78,000 civilians caught in the hard-to-reach town of Urm al-Kubra in Aleppo Governorate. A SARC warehouse was also hit.

Mardini said that SARC's director in Urm al-Kubra, Omar Barakat, was among those killed in the strike. "Omar was badly injured and rescue team could not reach him for two hours," he said. "When he was evacuated he could not survive his wounds. The team is in shock."

Monday's air strikes came just hours after the Syrian ceasefire deal brokered by the United States and Russia had failed. Prior to the attack, the US and Russia suggested that the deal could still be salvaged.