While saying that it's still extremely hard to say how many people have suffered as a result of the conflict in South Ossetia, non-profit organization Human Rights Watch tried to shed some light on the matter Monday. 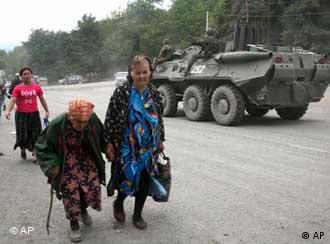 The fighting has forced South Ossetians to flee their homes

Russia claims that more than 2,000 people have been killed in fighting in the breakaway Georgian region of South Ossetia. Yet those casualty figures have not been independently varified. A report by Human Rights Watch on Monday, Aug. 11 said that the organization had heard only second-hand accounts of casualties.

An estimated 24,032 South Ossetians fled across the border to seek shelter in Russia since the fighting broke out on Friday. Roughly half of those since returned, according to Russian documents obtained by Human Rights Watch. Those that returned did so to "join the volunteer militias of South Ossetia," the documents stated.

Human Rights Watch said it was impossible to know the exact dimensions of the refugee situation, since multiple border crossings seemed to be commonplace.

The displaced people told Human Rights Watch that they had spent more than three days in the basements of their houses, unable to leave due to incessant shelling. Those from the South Ossetian capital city of Tskhinvali said they left on Sunday, Aug. 10 when Russian troops reportedly control. Russians organized a convoy of buses to transport local residents to a safe zone across the border in Russia, according to what the displaced people told Human Rights Watch.

There were also reports of multiple civilian casualties, but Human Rights Watch did not have any first-hand information on the death toll.

Residents of the South Ossetian village of Satskhenet told Human Rights Watch that they fled their homes during heavy shelling on Friday morning and spent two days hiding in the woods before making their way to towards the Russian border.

Human Rights Watch visited a field hospital located in Russia's North Ossetia run by the Russian Ministry of Emergencies. A hospital representative said that 52 wounded people were being treated there, nearly all of them military personnel. The hospital was expecting another 170 wounded to be delivered by ambulance from a mobile military clinic in South Ossetia.

Georgian President Mikheil Saakashvili claimed that 90 percent of his country's casualties were civilian. Saakashvili spoke about the losses in a conference call with reporters Monday morning.

Several hundred Russian servicemen have been killed and 80 Russian aircraft shot down, Saakashvili claimed in the call.

Readers shared mixed opinions over the Georgian-Russian conflict that erupted with violence over the weekend. (11.08.2008)

Opinion: Everyone's a Loser in the Caucasus Conflict

After nearly four days of violent conflict over the breakaway province of South Ossetian, Georgia called for a cease-fire. As fighting continues, it's clear that no one is going to win this war -- not even Russia. (11.08.2008)

Armed with automatic rifles, South Ossetia's haphazard rebel outposts don't stand a chance. And as the fighting in the Caucasus continues, some of the wounded are cut off from medical aid. (11.08.2008)