Human-powered ferry makes a difference for tourists — and the captain | Business| Economy and finance news from a German perspective | DW | 12.06.2019

Maik Slotta is a man you won't forget. He runs the only remaining manually operated ferry in the German state of Brandenburg, and there's no one to replace him, as DW's Hardy Graupner reports from the Spreewald region. 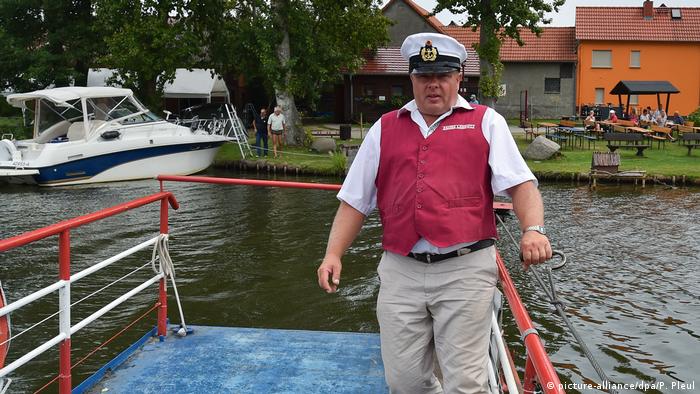 Maik Slotta is quite a character. Sitting outside on a shaded bench in his ultracasual clothes, he's waiting for locals and tourists. People need him to get to the other side of the river Spree.

Slotta's watching my arrival on the scene with muted enthusiasm. He's already told me on the phone that letting even more people know about his ferry service would probably not be such a brilliant idea, because — as he put it — that might further increase the rush of visitors and his workload. But the way he said it first and foremost betrayed a good deal of pride in his work as Brandenburg's only man operating a human-powered cable ferry.

His 10-person passenger transportation ferry is certainly among the tourist attractions of Brandenburg's Spreewald region, which is otherwise known for its small canals and waterways where visitors can take a trip in traditional punts.

"I'm into my eighth year of running that ferry", Slotta says, pointing out that during the April-to-October season there have never been any days off for him, and he's never called in sick.

"Sometimes it really feels like a dream job nonetheless," he says with a broad smile on his face. "Look, I lived off unemployment benefits for a quite a while, but then came the ferry and I can now make a living, without getting rich of course. There are rather calm periods, but there are also quite stressful days when tourists breathe down my neck, telling me to get a move on, because they feel I'm too slow."

Old doesn't have to be bad

It just takes about 5 minutes to get to the other side. When it's sweltering hot, it may take a bit longer, though. "People tend to forget the ferry is worked by human power — that's the way it was built in the early 1970s, and that's the way it's going to stay, period."

As a group of cyclists arrives, Slotta is getting ready for yet another crossing. 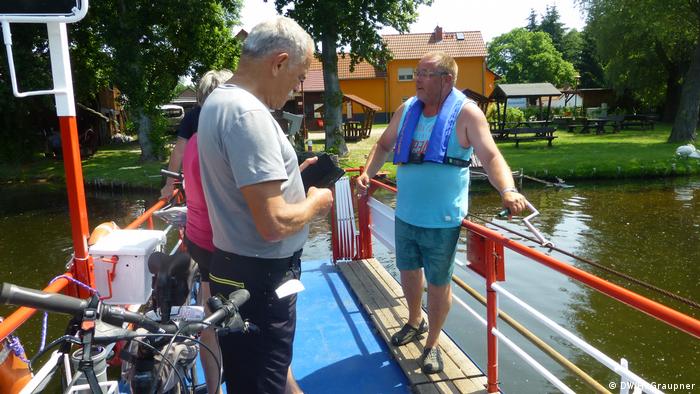 Maik Slotta is a good storyteller. During the crossing, tourists are bound to learn something new about the region and the ferry itself

"We've come all the way from [the German state of] Thuringia," says one of the female cyclists. "We're staying at a nearby campsite. We bought a local map and spotted the ferry and then put it on our itinerary."

Her husband is nodding, adding that he did read it's a human-powered cable ferry, "but I wasn't aware it's the only one of its kind in the whole of Brandenburg."

Once on the ferry, Slotta attaches a metal lever to the wire cable and starts pulling it.

"Following my enormous disc degeneration problems almost a decade ago, getting this job on the ferry was like the start to a highly efficient rehab training program that's strengthened my back muscles and eventually left me free of back pain," the captain notes. "I need to pull the lever about 65 times for one crossing. Hey, 1 minute and 46 seconds is the record, as far as I know, but that was in the beginning — I take it easy now, and I don't stop the time anymore."

Not exactly from rags to riches

Slotta and his wife have to make sure they earn enough money to see them through the months when the ferry is out of operation. A boat rental service and a snack stand help to generate some extra income, but the ferry remains the most crucial element in the family's business plan.

"Well, I usually keep mum about my stats; there are too many folks who envy me. They don't know that I don't have a fixed income," Slotta explains. "I live off the ticket prices, with more than half of the revenue eaten up by taxes and insurance fees. Let me tell you only so much: Three years ago I managed to get over 10,000 people to the other side in one season. The annual average is about 9,000, and counting."

As we talk, another bunch of visitors is arriving, eager to cross the Spree river. Among them is a couple who are regulars at the site.

"That's certainly no ferry like any other," says the man. "The captain, who runs the ferry, is unique, and I'm fascinated by the manual transmission operating mode. The environmental Greens would be over the moon. The ferry doesn't need any electricity and causes no pollution — it's the perfect thing."

So, why would they want to get across the Spree here in the first place?

"There's yet another beautiful lake on the other side, and the ferry helps you get there in no time. Otherwise you would have to put up with a 16-kilometer[10-mile] detour. And there are more cafes and restaurants worth trying over there, with really moderate prices that Berliners can only dream of."

His wife seems a bit concerned that the quiet and idyllic place might one day lose its spell, should too many tourists flock here.

"I think the locals here are not at all keen to see the number of tourists swell dramatically. They enjoy the paradise-like calm over here, and they certainly don't want to turn the region into a center of commerce where money rules everything. They say everything should stay the way it is; it's just fine."

But the media and regional authorities have certainly done their bit to make the region known to a wider public in recent years, says Slotta. 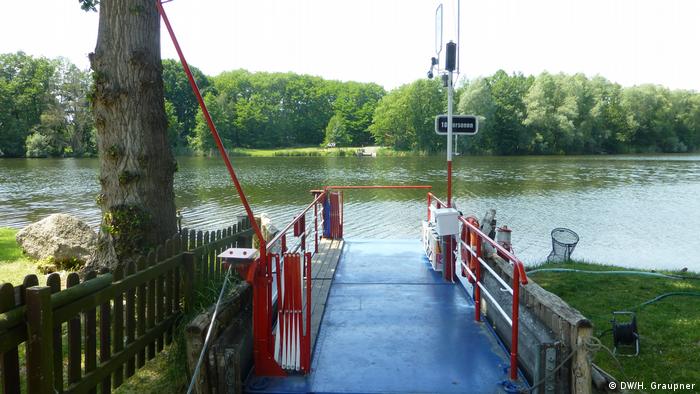 When the day's done, the ferry gets moored firmly — and Maik Slotta enjoys the tourists-free calm around him

"People get to know about the ferry from hearsay or TV programs. Also, local cycle tours have been heavily promoted in recent years, leading to a surge of cyclists in our region. By the way, it's not only Germans, who got wind of the ferry. Among my foreign guests have been Poles, Czechs, Russians, Danes, Dutch people, Belgians and tourists from as far away as Canada."

A couple of crossings on, Slotta takes a five-minute rest on his favorite bench near the river bank. He tells me about his anger about inattentive pleasure boat drivers who've run into the ferry cable, destroying it completely several times in the past, thus temporarily putting the captain out of business.

But the goods outweigh the negatives, he hastens to add, mentioning his conversations with the tourists.

"I certainly want to pursue this job as long as my health permits," he says. "Every five years I have to undergo a thorough health check. But as long as I get the green light from my doctor to carry on, I won't quit. Of course, I also have to see to it that the ferry passes its own regular health checks."

Has he ever thought about getting somebody else into the business, just in case? Slotta gives me a contemplative look.

"If I were to become ill, there'd be no one to step into the breach," he says. "You need a special passenger transportation license. To get this sort of a captain's license, you need over 300 crossings under supervision — as training sessions, as it were — before you are ready to take your oral and written exams. And let me tell you, it all costs a lot of money, before you get to earn a single cent with the ferry."

The Spreewald: A natural paradise not far from Berlin