#HowGreenAmI: Is a life without palm oil possible?

Palm oil is practically everywhere, whether it be food, cosmetics or gasoline. And it is not always easy to identify. So I decided to understand this ubiquitous stuff better. Turns out, I was naive. 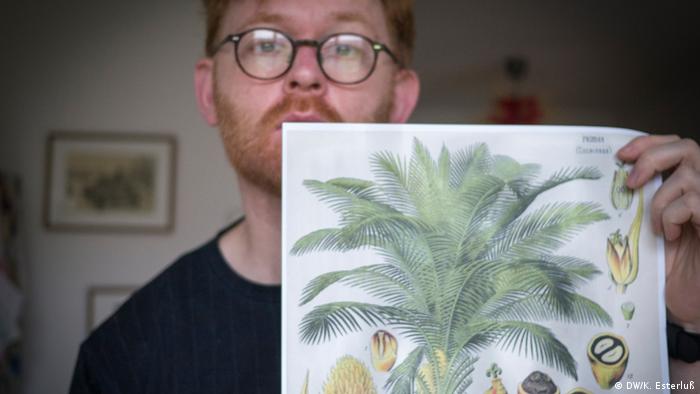 In the beginning, I have to admit, my approach to the subject was naive. "Clearly, palm oil is something I've heard of before," I said, "it's a product of the oil palm tree. Perhaps it is similar to coconut fat, maybe olive oil, it's most likely used for cooking." And I assumed that I would learn a lot about this fat relatively quickly. Boy, I was wrong. Avoiding it would be quite a challenge. And that was exactly my task.

A few days later I had read a few articles, scanned websites of environmental organizations, and watched YouTube videos on the subject and was quite surprised by what I had found. What had I gotten into? The stuff was everywhere. In food. Not only in Nutella, but also in pretzels, soup, chocolate, biscuits, muesli or margarine. Cosmetics were also full of it. And because palm oil is often used in animal feed, every sausage I would buy was probably, at least indirectly, a palm oil product. And what about gasoline? I had assumed that it contained mainly rape oil, but no: most of it is palm oil.

"I need someone to help me understand this oily business," I thought. To make things even more complicated, I found out that there's something called "green palm oil," a certified, perhaps sustainable variant of palm oil. Would that be the solution? Could I use that without remorse? Obviously not, several sources stated. For "green" is often nothing more than a smoke screen to cover up environmental destruction. Because for palm oil, rainforest is cut down on a huge scale to make way for monocultures, which can meet the huge demand worldwide. Huge, of course, because palm oil is in everything.

I started to turn my kitchen and bathroom upside down. I wanted to understand how bad my behavior really was. But it's actually impossible to study the list of ingredients of each and every product I have at home. What I understood was that companies rarely use the term "palm oil." Instead, they use technical terms or complicated names for something that could be anything. But palm oil? In the best case it said that some "vegetable fats" were included.

Then, however, I struck lucky. While reading about palm oil, I came across an app that might help, I hoped: Codecheck. If you use this app to scan the barcodes of products, it spits out all sorts of information on ingredients, including palm oil.

The core of the Codecheck app is a database, which is continually updated by the app's users, but also with data coming from environmental groups, Franziska Grammes of Codecheck explained to me. In addition, I learned how the rating system works, which allows the user to see if a particular product is good for them or not:

To my surprise, I found almost no food product in my household containing palm oil. However, it was quite common in our cosmetics.

Codecheck also distinguishes between good and bad palm oil. Good means "certified." This certification is the main contentious issue in the discussion about palm oil. There are different ways to assess palm oil, all of which want to prove that the oil is produced sustainably.

However, there is probably no perfect way to prove sustainability, because too many parameters have an impact on production: Is the palm oil produced in a monoculture, or does the rain forest remain untouched? Which fertilizers are used to which extent? Are pesticides used? Do different production standards apply to different markets? And what are farmers getting out of it? Can they make a living growing this crop?

The best known and most controversial approach is certification according to the RSPO, the Roundtable on Sustainable Palm Oil, which was launched by the conservation group WWF. Most of the main players in the market, including supermarket chains, use this certification process. Palm oil, which has been certified according to the RSPO, is supposed to fulfill certain conditions, says the WWF.

Critics, however, see the requirements as too lax. The system isn't perfect yet, the WWF's Ilka Peterson admits during our conversation. But as the organisation's palm oil expert, she says the certification standard is an important step to build upon.

The demand for palm oil has doubled over the past ten years. One in two products in an average German supermarket contain the oil. And Germany and Europe are not even the main markets. India and Indonesia consume the most palm oil per year, 10.4 and 9.1 million tons respectively. The EU as a whole uses less than 6.5 million tons.

"But wouldn't it be possible to replace palm oil in Europe with another, native oil?", I asked. It is not that easy, Ilka Peterson said. "We just do not have enough space here."

This is a statement that Sven Selbert simply can't subscribe to. The expert for tropical forests works for the conservation group Robin Wood. He has a clear idea of how a switch to rape could work. The crux is the massive use of fertilizers in the cultivation of oil palm trees, he says. Without them, the high yield of four tons per hectare wouldn't be possible and the yield shrinks to the level of rape. This in turn would make the switch to rape potentially viable. In addition, land has to be freed up. And this could be done if we finally stopped burning precious oil for fuel.

For me, there is no issue when it comes to palm oil in gasoline. The simple reason is: I barely drive. I can simply choose not to consume palm oil as gasoline. But many others do. And driving is responsible for a large, if not the largest chunk of palm oil consumption in Europe. With that in mind, it seems impossible to produce all the oil we need  in a way that can be certified as sustainable.

For my project, Robin Wood is the counterpart to the WWF. In the end, both organizations are pulling together for the greater good, to make palm oil more environmentally friendly. Even if one organisation criticizes the other, both say that it is up to us consumers to become active now. If we actively demand alternatives, if we start buying palm oil-free products, and if we make it clear to producers that we take nature conservation seriously, then something can change.

Next for my experiment, Martina Bacher finally gets on board. She runs the website Umweltblick.de and has put together a shopping guide which gives consumers the power to fight the mainstream by showing them alternatives to palm oil.

Starting in late 2014, food that contains palm oil needs to say so in Germany, says Martina Bacher. Cosmetics and cleaning products still don't need to be labelled. This is one reason why she developed her list and keeps it up-to-date. It is supposed to be a kind of map through the jungle of ingredients.

Our conversation brings my week-long experiment to a close. I have not lived completely without palm oil, but I have realized what I am doing, what kinds of products I buy and what I have to look out for. I have learned that it is sometimes hard to recognize palm oil. I have learned that there are certainly efforts to give the sought-after oil a push towards a more sustainable future.

Of course, this road is long, and which way we are headed probably depends too much on the profits that palm oil promises companies today. But I also learned that I'm doing pretty well right now, when it comes to palm oil.

I rarely use cars, I cook my food at home almost every day and know exactly what kind of ingredients I used (certainly not palm oil). When it comes to cosmetics I always avoid stuff from ordinary drugstores and I eat very little meat.

But do I live a life without palm oil? No, I don't. But perhaps life does not need to be entirely palm oil-free. We, as consumers, must be aware of the impact our consumption has on nature. We must adjust accordingly. And if we want less monoculture and less virgin forest to be cleared for palm oil plantations, then we should just make sure that we don't buy products that contain palm oil.

And in doing so, the information and impulses that my conversation partners have given can provide some very useful assistance.

On this edition of Eco Africa we use some eco-friendly soap from the Cape Verde Islands, vacuum up plastic on South Africa's beaches and see how a group is trying to bring migratory birds back to Burkina Faso.

United Airlines: 'No choice' but to go carbon neutral