How to make the perfect Christmas roast | Science| In-depth reporting on science and technology | DW | 23.12.2016

How to make the perfect Christmas roast

Preparing the big holiday meal doesn't leave much room for mistakes. You can either rely on technology to get the perfect roast, or have somebody else do the cooking. And not cooking properly can have real consequences. 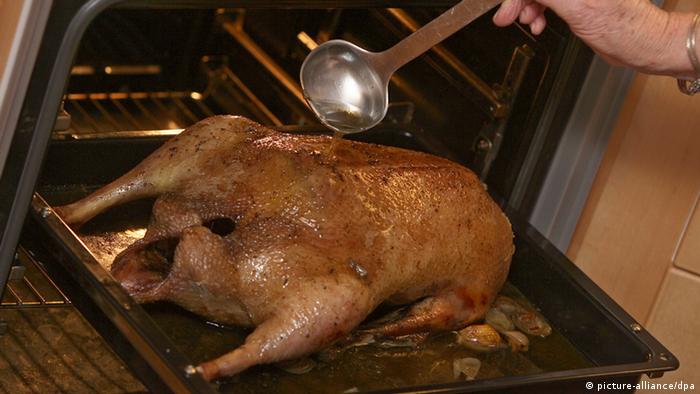 The holidays are a time of love, family togetherness … and, let's face it, food. We pretty much never stop eating in December.

But someone has to prepare all that food. If you're lucky, someone in the family knows how to prepare a big bird for the perfect holiday dinner. But not everyone's relatives know their way around the kitchen.

And it's important that you practice good kitchen hygiene, and cook your poultry at the right temperature. A recent announcement requiring testing of geese and duck for avian flu in Germany illustrates potential dangers.

But what if you don't know how to take care in the kitchen?

All aboard the 'Goose Express'

Virtu is head chef at the restaurant Kleinpetersberg in Bonn, where he has been reigning the kitchen for 10 years.

The short Italian man with the red apron is also the conductor, if you will, of the restaurant's annual "Goose Express": you can pre-order a whole, pre-cooked bird for Christmas, pick it up complete with stuffing, sauce and all the side dishes, and then simply heat it in the oven for half an hour before the family shows up. 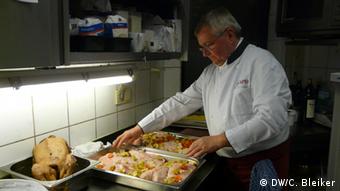 Virtu in his kitchen

"We've gutted the geese, cleaned them, and then filled them with oranges, apples, celery, carrots, onions and sage, which is typically used for goose," Virtu explains.

His birds are medium-sized - about 4 kilos each - with their feet tied together so the stuffing doesn't fall out in the oven.

"For this size, four hours is enough," Virtu explains.

Virtu, who is now 60, got his start in cooking at 14: he went to vocational school in Bologna and worked in his aunt's restaurant every day after school. He knows when to take the roast out of the oven just by looking at it. For the rest of us, though, it's a bit more complicated.

One decisive factor is the temperature. If you take it out of the oven before it's been heated all the way through, bacteria could remain on the meat. But if you leave it in too long, it'll be chewy and dry. 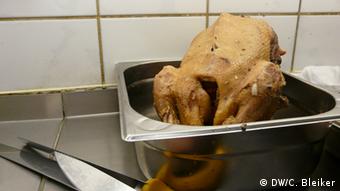 Around 200 whole geese are prepared in Virtu's kitchen each year

Christian Port knows a thing or two about how to prevent these mishaps - he isn't a chef, rather a product manager at German kitchen goods manufacturer Rösle. "When preparing a roast for your guests, you'd really like for everything to go right, at the right time," Port says.

To help with that, you could use one of Rösle's bestsellers: a digital meat thermometer.

The set-up is simple: you stick the thermometer's small sensor into the roast before you put it in the oven. The needle-like sensor is connected to a thermometer - which stays outside the oven - via a meter-long cable. On the thermometer screen, you can set the type of meat and whether you want your roast medium or well-done.

"When the correct temperature is reached, the alert starts and you'll know that everything is done and the meat is ready," Port explains.

Dangerous bacteria could ruin the holidays

Port says the thermometer has an accuracy of plus or minus about 1 degree Celsius. This attention to detail is necessary, because 2 degrees can make the difference between medium and well-done.

Testing these thermometers is a rigorous job in the lab. At Rösle, developers use a second, calibrated thermometer in a "test roast" to see whether the thermometer measured the temperature correctly, before they put their product on the market. 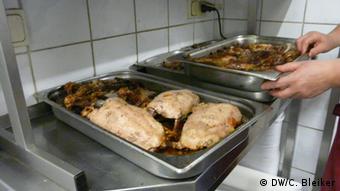 Ready for the oven: cooking the meat for the necessary amount of time is vital

The consequences of undercooking your holiday roast are very real: illness or even death due to bacteria in meat that wasn't cooked properly.

"Salmonella, lysteria, campylobacter and other bacteria, as well as also viruses in food, can constitute health risks for humans," professor Lüppo Ellerbroek of Germany's Federal Institute for risk assessment says.

In the UK, a study released in late November, and conducted by the Food Standards Agency, found high levels of campylobacter on fresh chicken sold at British supermarkets. Campylobacter is one of the most common causes of food poisoning.

As with salmonella, the campylobacter bug is killed by cooking. But if you use the same utensils to prepare the bird as you do for your salad, you may be in for trouble - salad isn't usually cooked, so the bacteria will still be alive and kicking.

Ellerbroek advises hobby chefs to pay close attention to kitchen hygiene and use different knives and plates for preparing raw meat, and everything else.

Alternatively, you could always opt for take-out. Maybe there's a service like Goose Express somewhere close to your house!

Campylobacter at the Food Standards Agency