The success of the AfD was a "double slap in the face" to Angela Merkel, but not the "earthquake everyone feared." DW rounds up the international reactions to the state elections in Saxony and Brandenburg. 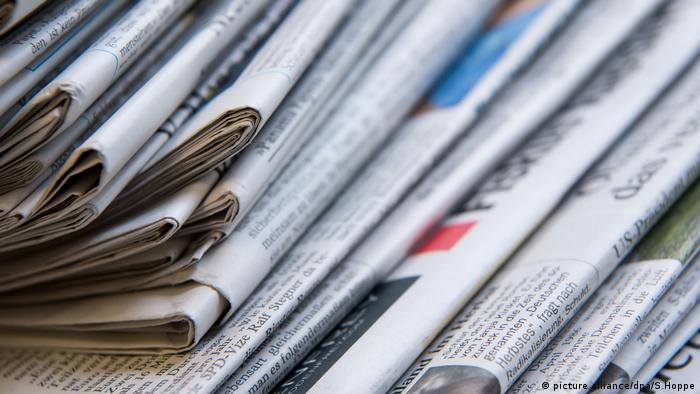 However, German Chancellor Angela Merkel's Christian Democrats (CDU) and the center-left Social Democrats (SPD) still managed to come out on top in Saxony and Brandenburg respectively.

The world's press followed the events closely, and had varying takes on the far-right surge.

The results were a "shock ... but not the earthquake that everyone feared," as Italy's Corriere della Sera put it.

La Repubblica expressed deeper worries, "The nightmare that the far-right AfD would be the strongest party in two federal states in the former GDR and rattle the Merkel government was averted ...But the extreme right is on a worrying advance...Fear, nationalism and xenophobia were the main instruments used in the election campaign." 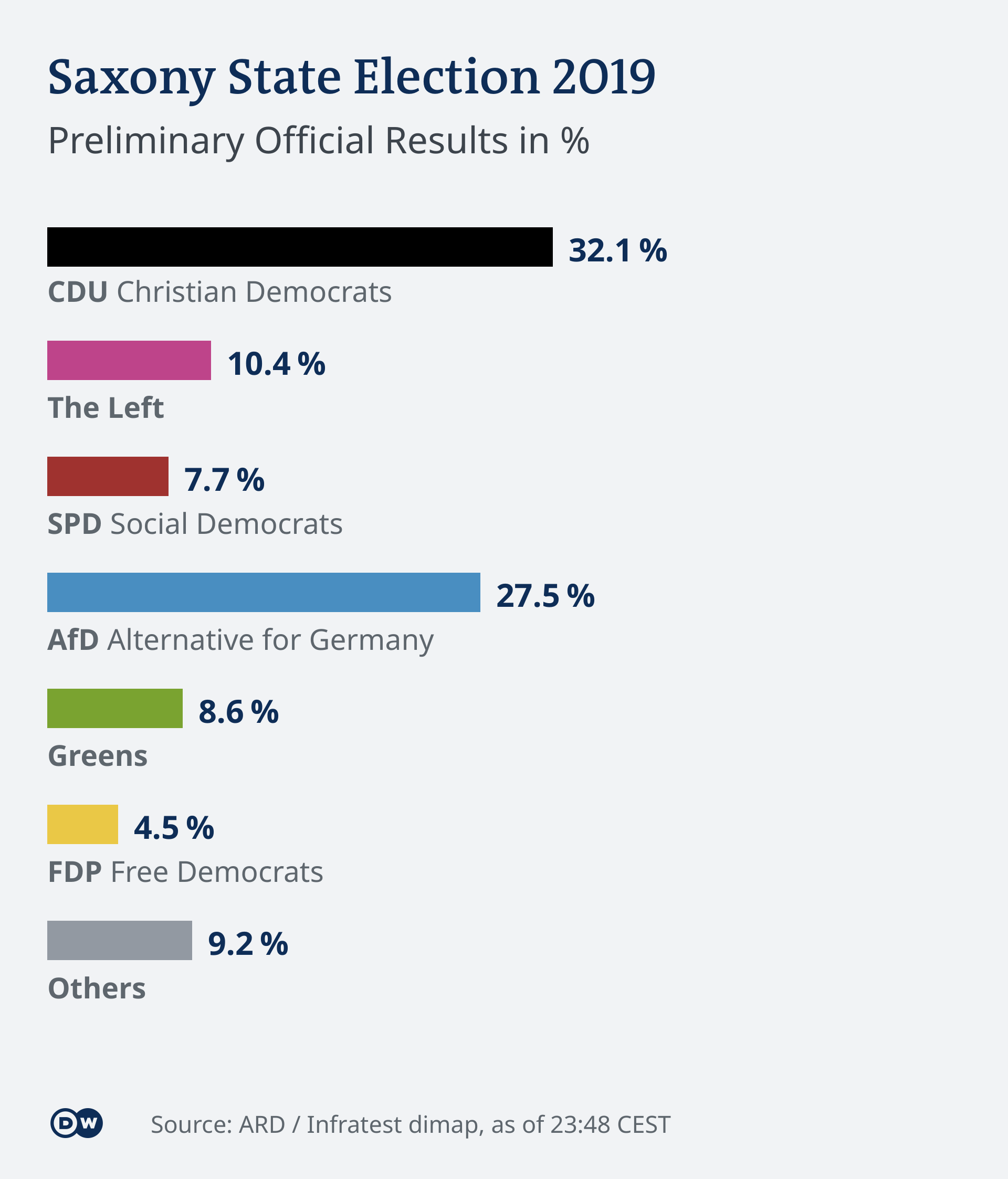 Poland's left-leaning Gazeta Wyborzcza took a similar line, opining that "the populist attack was deflected ... but the AfD still recorded a record result in Saxony and Brandenburg. However, they did not manage to beat the governing CDU and SPD."

France's regional Les Dernières Nouvelles d'Alsace wrote, "Thirty years on, the reunification is still breathing, but feebly ...The right is getting closer, they're nibbling away, one election at a time, pushing and shaking the foundations of social democracy." The Alsace paper added that as eastern Germany is in "economic despair," the AfD can "surf on the wave of latent and historical racism, which was caused by the massive influx of migrants in 2015."

French daily Le Monde called the AfD's rise a "strong breakthrough," saying that the party has "never scored as high," while the Dutch De Telegraaf said the results were "a double slap in the face for the unstable German coalition."

Volkskrant, another Dutch daily, said that while the right-wing populists were not the largest party in either state, the AfD can now "call itself the 'People's Party' in the [former] East."

Spain seemed more optimistic with La Vanguardia writing that the CDU and SPD "succeeded to slow down the ultra-rights" in the east while El Pais said that the governing parties can still "take a stand in the eastern rise of the ultra-right."

Denmark's Politiken said that while Merkel's CDU and the SPD suffered a blow in the east, they managed to "bypass the great catastrophe." 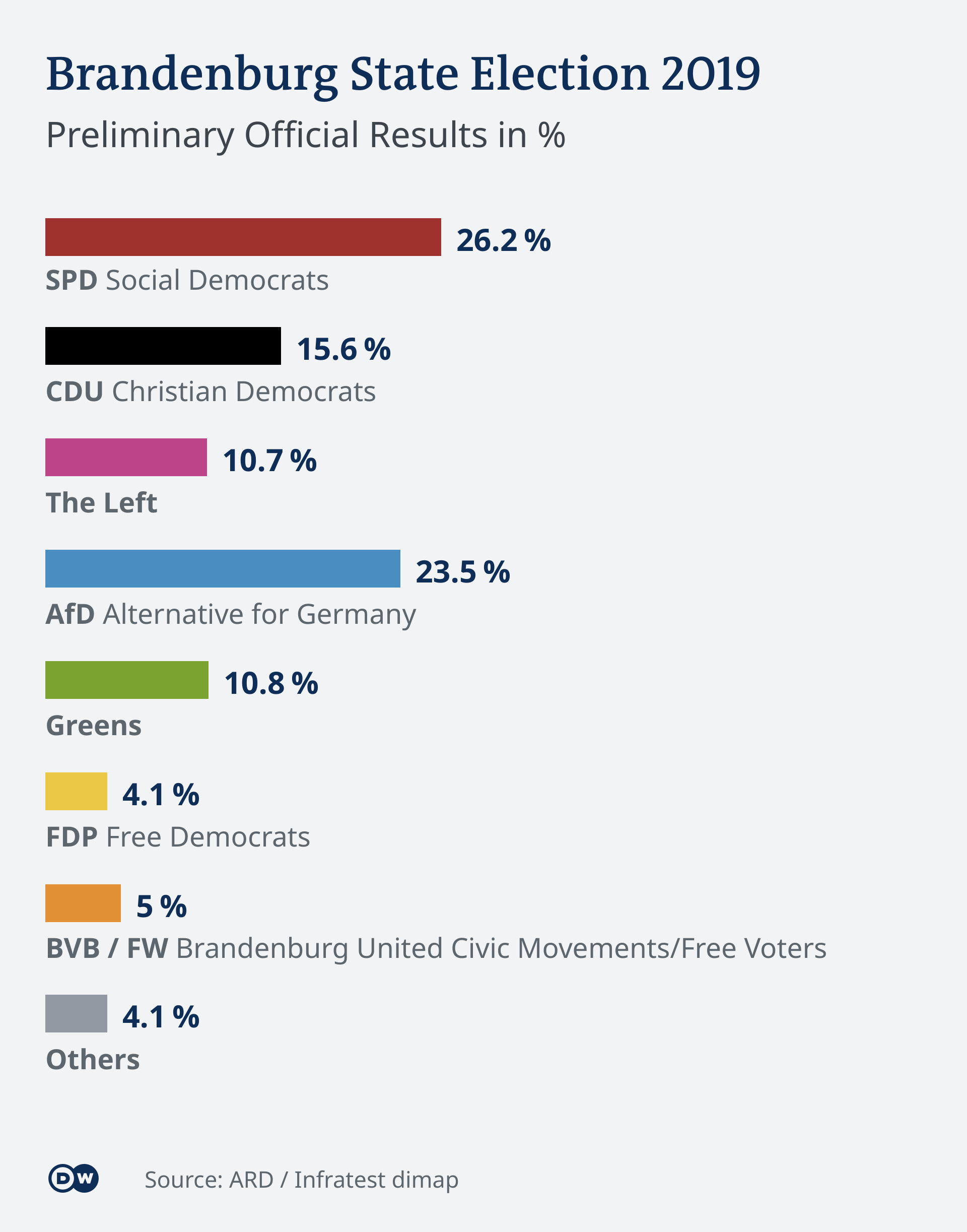 The Washington Post noted the "huge gains" made by the AfD were still insufficient "to overtake the established parties."

Politico said that although the AfD did not win in either state, the party "posted its best-ever result in both, sending a strong message to the Merkel's centrist coalition in Berlin."

The Greens could score record results in Sunday's elections in the eastern states of Brandenburg and Saxony. But they'll have to contend with the rise of the far-right Alternative for Germany. (01.09.2019)