How the iPhone changed the world | Business | Economy and finance news from a German perspective | DW | 08.01.2017

It was undoubtedly a technological breakthrough. The introduction of Apple's iPhone 10 years ago revealed how under Steve Jobs' leadership a simple cell phone turned into a complex, multipurpose mobile device. 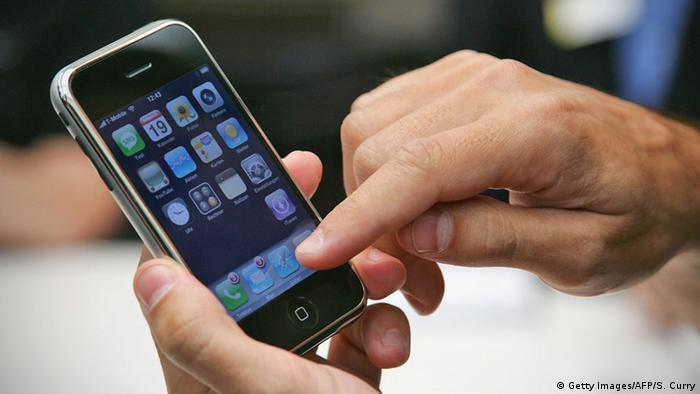 True to his nature, on January 9, 2007, Steve Jobs used his eloquence to capture the attention of his audience at the Moscone Center in San Francisco. He kept talking about "three new products" which he was about to present on stage. Visitors to the Macworld conference would soon find out that he was talking about three new products rolled into one new Apple device - the iPhone.

"The iPhone was the first-ever smartphone, the editor-in-chief of the "Mac & i" publication, Stephan Ehrmann, told DW. "It was the first cell phone with a big display that you could use to surf the web and listen to music."

What's completely normal for today's smartphone users was revolutionary 10 years ago. Before the iPhone hit the markets, cell phones were not really user-friendly. Those devices often only had a monochrome display, a huge keyboard and miserable internet connection parameters.

The iPhone only has one button, and it comes with a virtual keyboard that's only displayed when you need it. When introducing the new product a decade ago, Steve Jobs spoke about reinventing the phone. What he presented was in fact a lot more than just a phone - it was a full-fledged mobile computer that you could use everywhere. 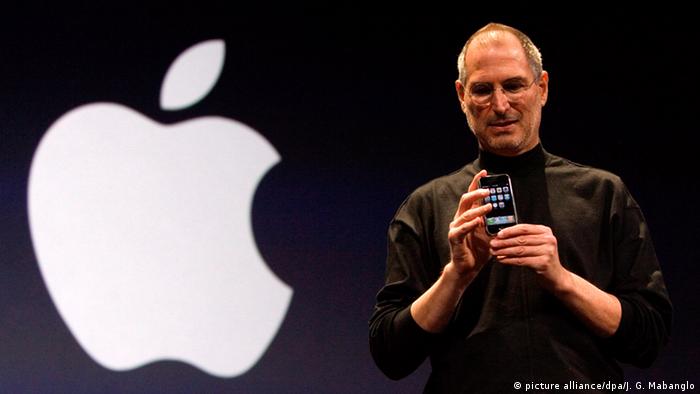 Meanwhile in Germany, six in 10 people own a smartphone, and almost everyone in the 14-to-29 age bracket does. Kids can handle the phones just like adults know how to drive a car.

"The iPhone was a true revolution for the business world," said Tobias Kollmann, a professor for e-business and e-entrepreneurship at Duisburg-Essen University. With the internet basically in everyone's pocket, actual and potential customers were suddenly a lot closer for companies. Just remember that smartphone owners seem all too willing to also buy products via online transactions.

Smartphones have also had a huge impact on the tourism sector, says Kollmann. Location-based services enable hotel operators to localize smartphone users to make tailor-made offers to them, to offer them hotel rooms in their vicinity. And even whole tours are increasingly being booked online, he adds.

Over a billion iPhones sold

Of course, the sale of iPhones is big business, although the overwhelming number of smartphones in use worldwide are not from Apple and run on the rival Android operating system from Google (80 percent). But for Apple itself, the iPhone is still the company's big money generator, with profit margins a lot higher than those generated by its competitors. Since its introduction 10 years ago, over a billion iPhones of different generations have been sold globally.

The iPhone is Apple's cash cow, and its most successful product by far," says Stephan Ehrmann from "Mac & i." "It's washed huge profits into the company's coffers and has made Apple the world's most valuable company." 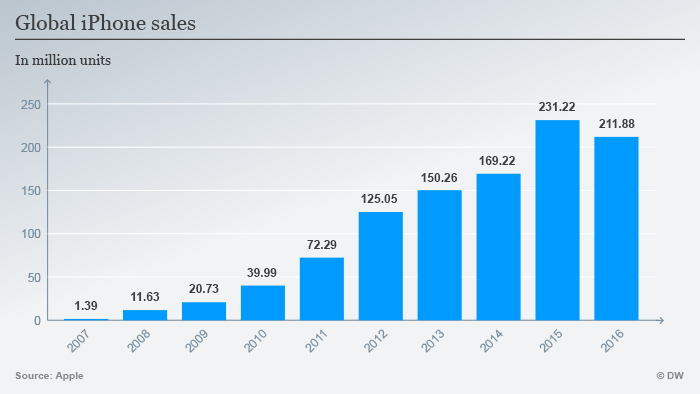 But there's a snag, says Ehrmann. The latest iPhone generation has seen dwindling sales figures, prompting Apple to slow down iPhone 7 production. "They know full well that sales are declining, and they don't want to get stuck with too many units produced," he argues.

Products such as the iPad, Apple TV and the Apple Watch have not been able to match the success of the iPhone. So how are Steve Job's successors going to ensure that the company continues to thrive? Ehrmann believes that the answer can be found in the Apple Car, a self-driving electric vehicle which is rumored to hit the market in the next couple of years. But until then, such a car is nothing but that - a rumor.