How the discovery of a Jewish banker′s looted estate reunited a scattered family | Culture | Arts, music and lifestyle reporting from Germany | DW | 20.11.2018

The family of the banker Marcus Heinemann was scattered all over the world. Then a provenance researcher discovered a file from the Nazi era, allowing the family to reunite in Germany for the first time in 70 years. 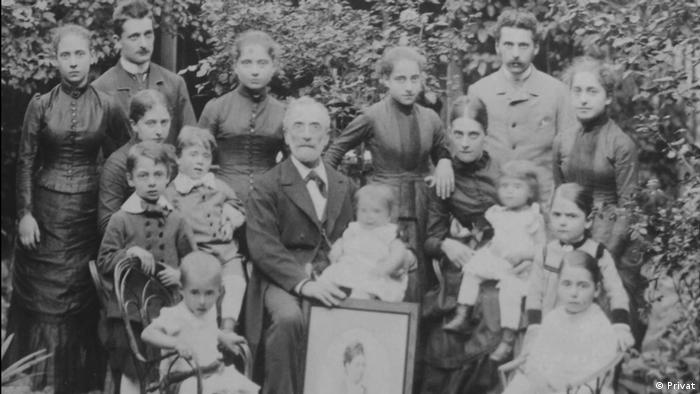 Marcus Heinemann had a successful life. Born in 1819, the son of a Jewish peddler worked his way further up the social ladder. At the end of the century, he owned Lüneburg's most successful bank. Heinemann (pictured above with his 14 children, ca. 1884) was also a patron of the arts and played a major role in the construction of the magnificent Lüneburg Synagogue.

In his spare time, he enjoyed visiting his children and numerous grandchildren, almost all of whom lived in Lüneburg like him. He died peacefully in 1908.

The family patriarch fortunately did not live to see his descendants fall victim to Nazi persecution 30 years later. Two of his children and 13 of his grandchildren were murdered in the Holocaust. Those who were able to flee scattered all over the world. They gradually lost sight of each other.

Shortly after anti-Jewish pogroms erupted all over Germany in the night of November 9, 1938, the authorities had the Lüneburg Synagogue torn down at the costs of the local Jewish community. Heinemann's estate was forcibly auctioned off and the Marcus Heinemann Hall in Lüneburg's Museum was renamed. At the end of the Second World War, it was as if Marcus Heinemann had never existed. 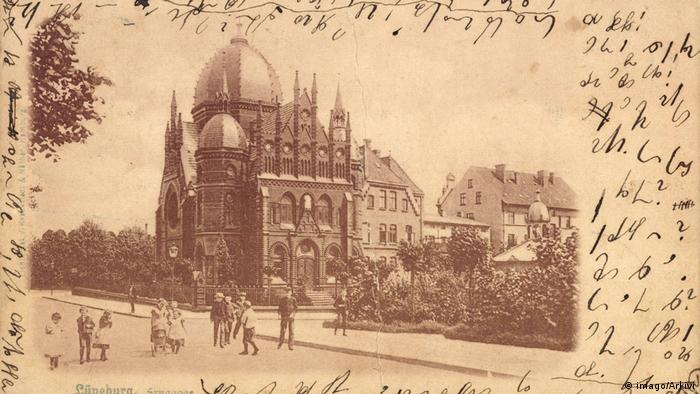 A former symbol of vibrant Jewish life, the Lüneburg Synagogue was demolished in 1938 — and the Jewish community was forced to pay for it

And that would probably have remained so had it not been for a file from 1940 documenting the auction that ended up on the desk of provenance researcher Anneke de Rudder. The list documented all the objects of "non-Aryan property" that had been forcibly auctioned off in the house in which the Jewish Heinemann family had lived. Back in the 1940s, the Museum Lüneburg had "secured" a number of these objects.

Looted art in the Museum Lüneburg

The documents corroborated Anneke de Rudder's suspicion. Her employer's collection included looted art, objects that should have belonged to the descendants of Marcus Heinemann. Strictly speaking, they were not valuable exhibits. No Monets and no Van Goghs.

In what was left of Heinmeann's estate, there was a Gothic chest, a stained window with a coat of arms, some gold coins... Perhaps the most valuable object was a family bible that de Rudder retrieved from the museum's archive. The rest of the estate was destroyed in an air raid on Lüneburg towards the end of the war. When presented with de Rudder's findings, the museum decided to restitute the objects to the rightful owner's heirs. Only, where were they? 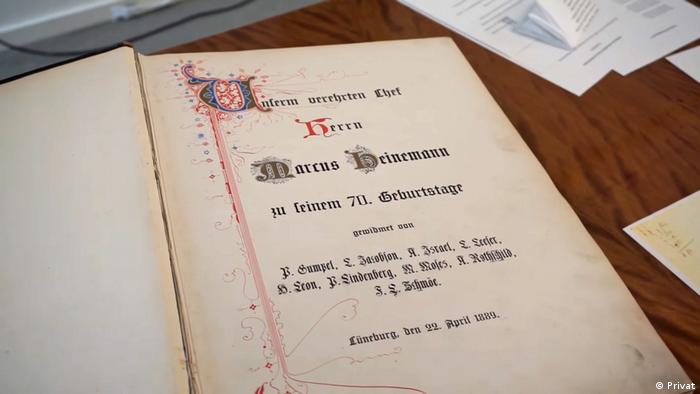 De Rudder set out in search of Heinemann's descendants. After scoring through innumerable Google results pages, she finally established contact with Becki Cohn-Vargas, an American education consultant and a great-granddaughter of Heinemann's. "I had no idea that this journey would mean so much,” says Cohn-Vargas in retrospect. The story of Marcus Heinemann's family shows that restitution is more than just a question of possession and money. It's also about healing.

Together, Cohn-Vargas and de Rudder identified other descendants. In the course of several months the family tree, first blurred and truncated, grew more intelligible — and more sizeable. The traces of the Marcus Heinemann family led them to the USA, Guatemala, Mexico, Canada, the Netherlands, but also to Berlin and Marburg. The two women discovered that the Heinemanns were scattered all over the globe.

The big family reunion finally took place in Lüneburg on a weekend in July 2015. Fifty Heinemanns joined the event. They came from all over the world; most of them had never met before, and yet they were all connected through their common history. They had a lot of catching up to do on those two days.

"Most of us grew up with only a vague notion of the family history," says Becki Cohn-Vargas. "In Lüneburg this story suddenly came to life — especially in the empty spaces left by the Heinemanns: the empty property where the synagogue that was built by the Heinemann family and others was once located, and in the Jewish cemetery, which was destroyed twice." 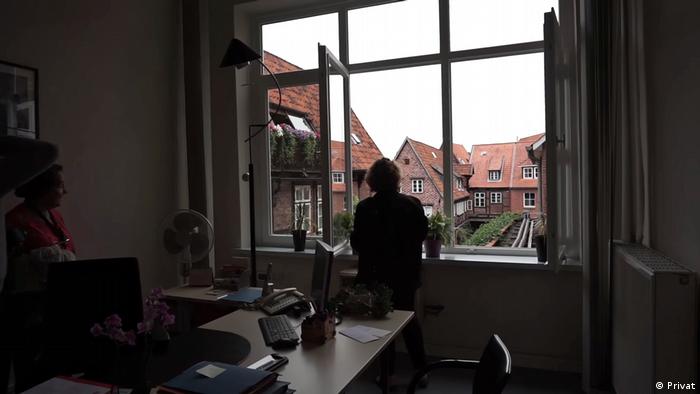 Heinemann's great-granddaughter Becki Cohn-Vargas stands in the room where her grandmother grew up. It is now an office

For two days Becki from California, Edgar from Guatemala, René from France and many others explored the city of their ancestors. They visited the apartment where their grandparents, the sons and daughters of Marcus Heinemann, grew up. In an artist's studio, the decorated stucco ceiling was the only element reminiscent of the small synagogue where Marcus Heinemann spent every Sabbath as a young boy. Every citizen of Lüneburg they met wanted to apologize to the family for the abuses, says Cohn-Vargas.

Solemn restitution of the family property

Finally came the most important moment. In a solemn ceremony, the museum officially asked the family for forgiveness. The looted art was returned to the Heinemanns. The grandchildren of Heinemann unanimously decided to leave the property on loan in the museum's permanent exhibition.

Becki Cohn-Vargas says it could of course have been lent to a Holocaust museum. But she is "firmly convinced that the people of Lüneburg should know Marcus Heinemann and his descendants". 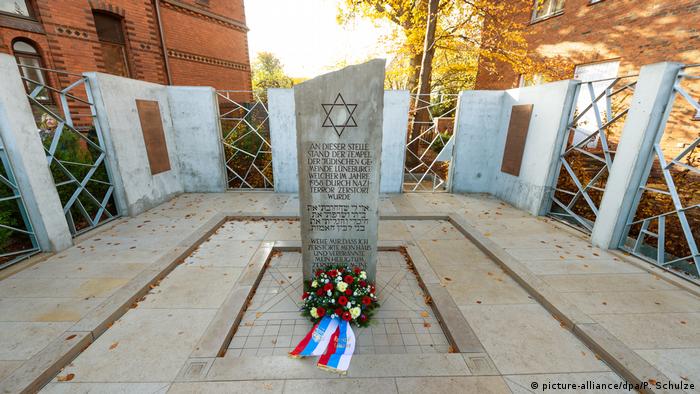 Inaugurated in November 2018, a memorial on the site of the former synagogue now commemorates Lüneburg's Jewish community

Two years after the event, she feels that the Heinemanns have recovered their place in Lüneburg. For the daughter of two Jewish emigrants who had fled to America and never wanted to speak German at home, this is no less than a small miracle. Her amazing family, once scattered and almost lost, is now united and stronger than ever and has came together with former neighbors. She smiles: "This is the true power of provenance research."

What the Nazis stole from synagogues during the November 1938 pogrom

While Nazi troops stormed and burned synagogues during the Kristallnacht pogrom on November 9, 1938, German museum directors were waiting in the wings, eager to acquire Jewish cultural artifacts for their collections. (09.11.2018)

If you've been to Germany, you might have noticed the small brass blocks embedded in sidewalks to commemorate victims of Nazism. The unique memorial project, launched 20 years ago, has just passed an important milestone. (23.10.2018)

German and Romanian officials have attended a memorial service for the 30,000 people, mostly Ukrainian Jews, murdered on October 22-23, 1941. The massacre has been a long overlooked page of WWII history — until now. (22.10.2018)