How Schalke ′reinvented′ themselves to get back to the Bundesliga | Sports | German football and major international sports news | DW | 08.05.2022

How Schalke 'reinvented' themselves to get back to the Bundesliga 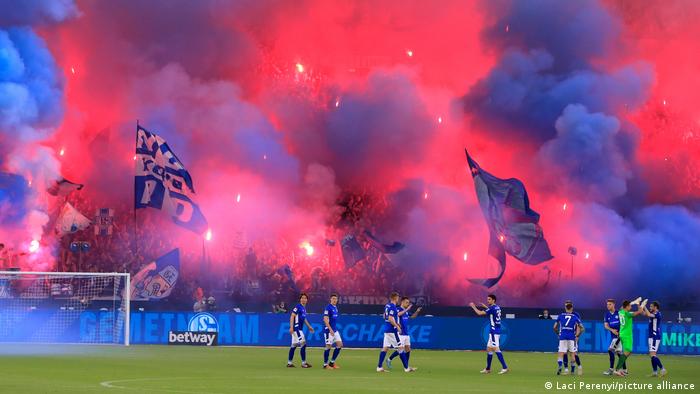 The excitement over Schalke's win was visible

"One thousand fires in the night," begins the final verse of Schalke's club hymn, evoking the flames atop the mine pits which would have illuminated industrial Ruhrpott nights in decades gone by.

On Saturday, those flames were instead dotted across the Nordkurve (north stand) at the Veltins Arena, the Schalke ultras' flares mingling spectacularly with clouds of blue smoke ahead of the Royal Blues' dramatic 3-2 win over FC St. Pauli that saw them secure promotion back to the Bundesliga.

"That is what gave us the greatest joy," the hymn, called Blau und Weiss (Blue and White), continues. "One thousand friends standing together, so that FC Schalke shall never die."

But Schalke did come very close to dying. "We stood on the brink of the abyss with our toes edging over," one long-serving club employee told DW.

When Schalke were relegated for the first time in 33 years last season, the sporting calamity which had seen an expensively assembled squad win just two matches in 15 months and burn through five coaches in one season was the least of their worries.

The club was drowning in €217 million ($257.8 million) of debt, the board was divided in acrimony and former de facto club boss Clemens Tönnies was mired in a series of racism and coronavirus related scandals.

Twelve months later, however, a completely reshuffled board and playing squad have stabilized Schalke's fortunes on and off the pitch, even weathering the storm of Russia's invasion of Ukraine, which led to the termination of the club's lucrative long-term sponsorship deal with Gazprom. 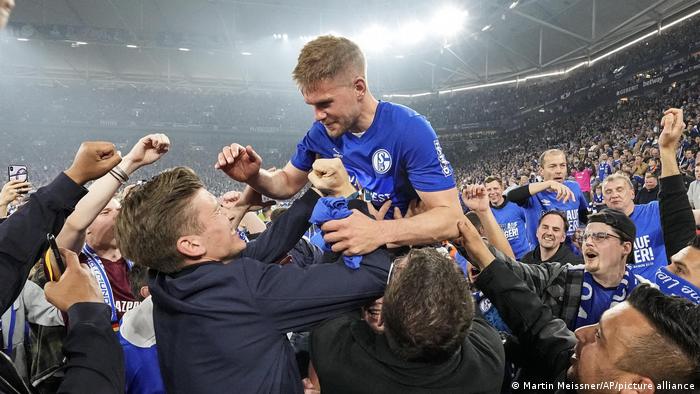 Simon Terodde's goals have fired Schalke back to the Bundesliga, and him into the hearts of the fans.

On the field, the obvious explanation for Schalke's success is Simon Terodde. The 34-year-old's brace against St. Pauli ⁠— his 28th and 29th goals of the season ⁠— didn't just cancel out the visitors' lead, they also effectively guaranteed him an unprecedented fourth second division Torjägerkanone (the "striker's cannon" as the golden boot is known in Germany).

Terodde's goals have been vital in a typically rollercoaster 2. Bundesliga season in which Schalke have conceded four goals on four occasions. After a 3-4 home defeat against newly promoted Hansa Rostock in March, head coach Dimitrios Grammozis was sacked and replaced by 1997 UEFA Cup winning club legend Mike Büskens on an interim basis.

Schalke went on to win seven of the next eight, with Terodde netting ten in the last six, including a dramatic injury-time winner away at Sandhausen last week, a goal which prompted ecstasy among the 10,000 travelling fans.

Yet Terodde is merely the spearhead of a team smartly put together by sporting director Rouven Schröder, formerly of Bundesliga side Mainz 05, who oversaw an incredible 45 transfers last summer: 30 out, including Amine Harit (to Marseille), Ozan Kabak (Norwich) and Mark Uth (Cologne), and 15 in, including Marius Bülter (from Union Berlin), Dominick Drexler (Cologne) and returning academy product Danny Latza (Mainz), alongside Terodde (Hamburg).

"I have never experienced a squad restructuring on this scale," said Schröder. And he did it while working within a tight budget reduced from over €80m to around €20m by new financial director Christina Rühl-Hamers, the first woman to hold such a position in top level German football when she took on the job in October 2020. 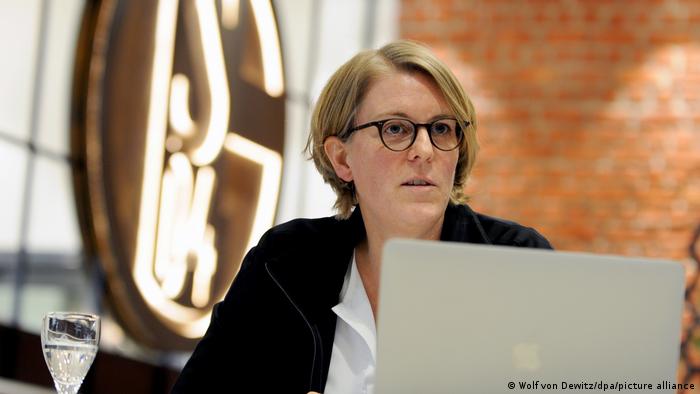 "We want to set up our finances solidly for the long term," she told the club's website. "That means not spending money that we don't have."

What sounds like a logical approach in any walk of life was anything but the norm in Gelsenkirchen where Schalke, Germany's second biggest football club with more than 160,000 members, suffered from delusions of grandeur. When they finished second in the Bundesliga in 2018, for instance, fans and press alike criticized the rather conservative style of football played by head coach Domenico Tedesco.

"Schalke always wanted to mix it with the very biggest," says the club staffer. "We wanted to challenge Bayern and we paid big money for it. But relegation has taught us some humility."

There is physical evidence of that humility at Schalke, where building work on the new "Berger Feld" youth academy and training facility has been paused, while the club's eSports division was sold for €25m. The debts have been reduced slightly to a still huge €183.5m, but a series of successful bond issues are providing the necessary capital.

"Rühl-Hamers' greatest strength is that she draws up financial plans and then sticks to them rigorously," says DW's contact. "That is exactly what Schalke needs in this situation."

Such sentiments are replicated throughout the fanbase.

"In the space of a year, the new people in charge have managed to put together a team which is actually worthy of the word," wrote the hardcore Ultras Gelsenkirchen in their fanzine, the Blauer Brief, ahead of the St. Pauli game. "This smart, rational approach has won back trust among fans and members, and boosted identification with the team." 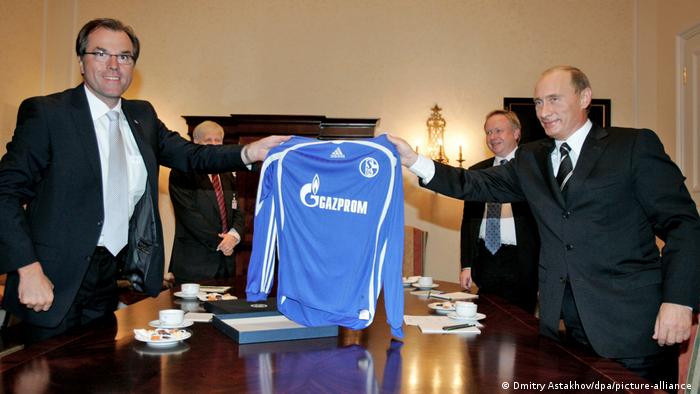 Schalke, Tönnies, Gazprom: 'It was the right thing to do'

For many, the biggest blow to the relationship between club and membership last year came when Clemens Tönnies was effectively acquitted of racism by Schalke's honorary board, a form of internal ethics commission.

When the pandemic struck, Schalke thoroughly abandoned their community principles with money-saving measures that included requiring season ticket holders to submit evidence of why they needed reimbursing for matches played behind closed doors. The ultras called their club "morally bankrupt."

So, it was telling that, following Russia's invasion of Ukraine in February, the new Schalke board immediately terminated the club's lucrative, long-term sponsorship deal with Gazprom. The deal with the state-owned Russian energy supplier was arguably Tönnies' greatest legacy, earning Schalke around €20m per year since 2007. Following relegation, that was reduced to an estimated €9m, plus bonuses, still a huge sum in the second division and Schalke's financial lifeline.

In Gazprom's place, a shirt-sponsorship deal worth €4.5m per year was quickly signed with local real estate company Vivawest, while national supermarket chain REWE also came on board as training kit sponsor. 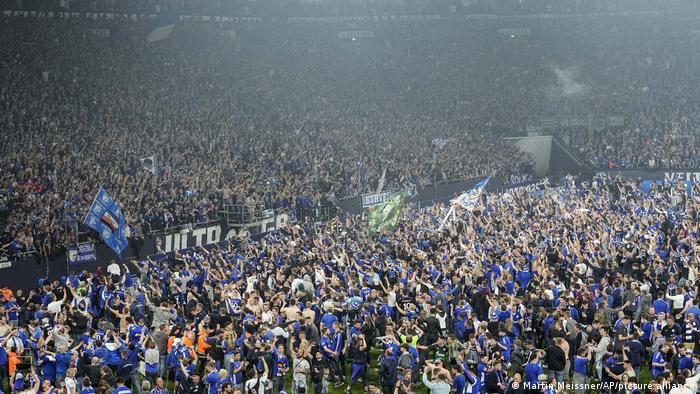 'United again:' Schalke are back in the Bundesliga and pulling in the same direction

On the ground at the Veltins Arena, any references to Gazprom have disappeared from the complex which surrounds the stadium. Most fans have stickered over the name on their replica shirts, covering it up with messages of peace or support for Ukraine, or opting to wear retro kits instead.

For Kornelia Toporzysek, a lawyer who resigned from the honorary board last year in protest at what she described to DW as the "patriarchal Tönnies System," Schalke are "reinventing" themselves.

"We're united again," she says. "We're taking a different path. It's not the most glamorous path but we're taking it together. We're only spending the money we have, and that suits Schalke much better: We're a down-to-earth workers' club."

That feeling of a relationship repaired was tangible throughout Saturday. Hours before the game, the pubs along the iconic Schalker Meile (Schalke Mile) were full to bursting and queues formed outside the turnstiles from late afternoon. With one hour still go to until kickoff, the Nordkurve terrace was packed, and the noise raining down from all four sides of the arena was deafening.

"This evening, the longing is burning," read one banner ⁠— a longing not just for Schalke's return to the Bundesliga, but also for a return to sensible financial management, a return to a club of which the fans can be proud of once more, thousands of friends standing together, as the song goes.

Thanks to a spectacular second-half comeback, that first goal has been achieved. As for the rest, they're on the mend ⁠— but there's still a long way to go.

"We've taken two or three steps away from the abyss," as one club source puts it. "We're not as dizzy anymore."