Can Jews still feel safe in Germany? The large influx of refugees from Arab countries has many Jewish communities concerned about increasing anti-Semitism. 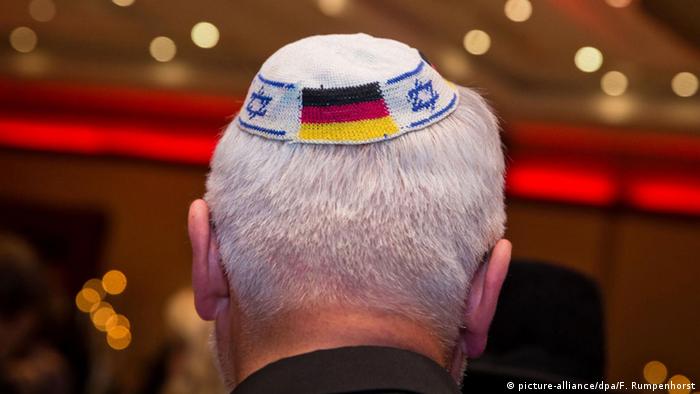 Lena Stein lights a cigarette while she considers the question of whether she still feels safe as a Jew living in Germany. "I cannot answer that with yes or no," says the student from Frankfurt am Main, as she exhales a cloud of smoke into the icy winter air. "The subject is far too complex."

Julian-Chaim Soussan says he'll maintain his habit of looking over his shoulder. "From a Jewish perspective, Germany is one of the safest countries in Europe," says Soussan. "Politicians are very careful not to let anti-Semitism take hold here." Nonetheless, he has heard from others that there are doubts about how safe Jews should really feel in Germany.

Soussan is a Rabbi in Frankfurt am Main. With some 7,000 members, his is one of the largest congregations in Germany. With a Kindergarten, school, youth center, sport clubs and a cemetery, Jewish institutions belong to the city as much as any other religious confession. When Soussan describes his city and its 700,000 residents he says, "Frankfurt is multicultural, I think that everyone lives in their own way, but in the end they all live together. We are well supported here - and well protected." However, he observes his surroundings carefully, "especially when I am with my family and am wearing a yarmulke." The Rabbi says that these days he is less fearful of rightwing extremists and more of "Islamic fundamentalists." Jewish life in Germany has a long and rich tradition

The fact that such fear is not unjustified was validated by a recent incident in Marseille, France, in which a teacher from a Jewish school was injured in a knife attack on the street. Media reports said that the three men who attacked the history teacher yelled anti-semitic slogans and had also declared their allegiance to the terrorist group "Islamic State."

Although he is generally open to immigrants, the Frankfurt Rabbi is nevertheless concerned that young Muslim men could become radicalized here in Germany. "We are in a quandary," he says, referring to his congregation. On the one hand it is "urgent that we let in those people seeking to avoid war and terror and offer them a home," emphasizes Soussan. "Throughout our history we Jews were always fleeing and we know what that means."

Yet he can also understand it when new refugees are received cautiously. "A number of these people were raised to view Israel and Jews as their enemies." And it won't be any easier if people, who already have radical ideas, enter the country, adds Soussan. But then, he says, it is society's task to convince them to join the majority here, a majority that is not radical.

That is how Daniel Neumann, director of the Jewish community in Darmstadt in southern Hesse, sees things as well. "It is our moral responsibility to help people that are fleeing." Though he does not deny that this could eventually bring problems for Jews in Germany and throughout Europe, saying: "You cannot get radical ideas out of peoples' heads quickly." In the end, he is much more fearful that radicals from Arab countries could join forces with existing networks of rightwing extremists. "One has seen it happen in the past," says Neumann. "Because these groups have something in common: prejudices and their hate for Jews." Such an amalgamation worries Neumann. 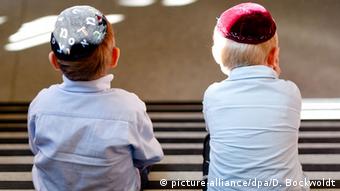 Some Jews in Germany are worried about wearing yarmulkes

Playing it safe without the yarmulke

Lena Stein says she does not think that refugees pose a threat to the Jewish community in Germany. "These people have fled terror and civil war themselves, they want to live in peace and quiet without being oppressed by fundamentalists," says the 25-year-old. In any case, Lena does not feel threatened on the streets of Frankfurt, qualifying her answer by saying, "but I don't wear anything that says I am a Jew." Daniel Neumann also says, "as long as no one can see that we are Jewish we only have a very diffused feeling of concern, but not a feeling of fear."

Lena also has no worries about her own safety, or that of family and friends, when present in institutions within the Jewish community. "We are all very well protected there, we are really safe." Nevertheless, when asked about whether Jews should wear their yarmulkes on the street, she says no, adding that it could end up causing a radical to attack the yarmulke wearer - "People don't need to provoke anyone."

Julian-Chaim Soussan is of a different opinion. "We are in Germany here, we are allowed to be free," he says. He wears his yarmulke in public because he feels it should be a part of everyday German life. Like a headscarf? "Yes," the Rabbi says, "like a headscarf."

France's Jewish community has been hotly debating whether boys and men should wear skullcaps in public in the wake of an anti-Semitic attack. Some say it's simply too dangerous. Elizabeth Bryant reports from Paris. (15.01.2016)

Berlin Jews fear refugees could put them 'in jeopardy'

Jews in Germany are concerned that the country's open-door refugee policy could lead to a rise in anti-Semitism and cost the country its hard-earned position as a safe haven. Charlotte Chelsom-Pill reports from Berlin. (15.12.2015)

Visiting Israel, German President Joachim Gauck has called for stronger bridges between Germany and the Jewish state. He said friendship was possible despite differences of opinion. (06.12.2015)