President Donald Trump's Asia trip was an opportunity for the US to showcase itself as the supreme global power. Instead, President Xi Jinping grabbed the limelight and presented China as the new 'world leader.' 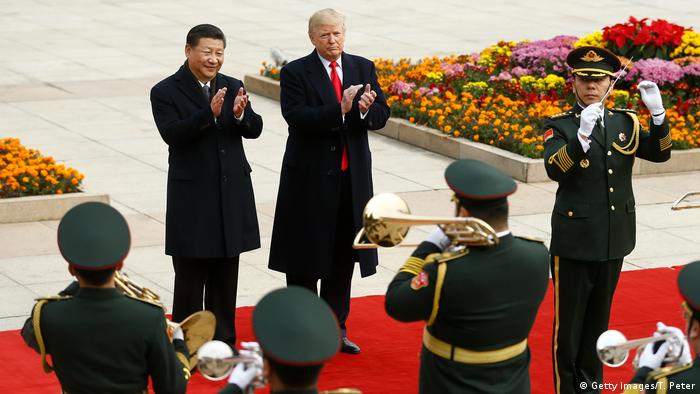 Xi Jinping's extravagant reception of Donald Trump in Beijing last week was a perfect opportunity for Xi to display his vision of establishing China as an economic and geopolitical equal to the US on the world stage.

President Xi has reached a political zenith in the wake of the 19th Chinese Communist Party Congress in October, during which he consolidated control over China's ruling elite and saw his political philosophy incorporated into the party constitution.

President Xi currently commands an unrivaled level of political power and he has been dubbed the "world's most powerful man" by several western media outlets.

And President Trump seems to agree with this assessment. During his two-day visit to the Chinese capital, Trump played along with the pageantry and pomp that had been laid out by President Xi, calling him a "very special man."

Trump also had warm praise for China's economic performance and contradicted his previous rhetoric, in which he blasted China for "killing" the US on trade. 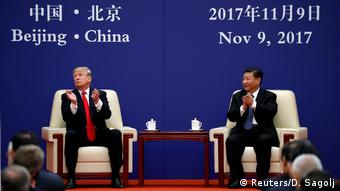 On Thursday, during an appearance with Xi in front of reporters at the Great Hall of the People, Trump said he didn't blame China for a "one-sided and unfair trade surplus," placing the blame instead on his predecessors for "allowing the out-of-control trade deficit to take place and grow."

"After all, who can blame a country for taking advantage of another country for the benefit of its citizens," Trump said. "I give them great credit."

Incidentally, US and Chinese firms signed $253 billion (€220 billion) worth of deals during the ceremony, which according to the South China Morning Post, is the largest in the history of US-China relations.

Trump on Friday emphasized his country's past and continued interest in the Asia-Pacific region at a meeting of world leaders anxious about what turn US policy might take under his leadership.

President Xi's remarks on Thursday indicated that he considers US-China relations to be a relationship among equals. At one point during Trump's two-day visit, he said that relations had entered a "new historic starting point" and that China would work with the US on a basis of "mutual" respect and benefits.

But observers say Trump's China visit produced more symbolism than substance. "President Trump's visit to China has not been designed for the purpose of achieving significant outcomes or deliverables," Ryan Hass, a fellow with the Center for East Asia Policy Studies at the Brookings Institution in Washington, told DW. "This fits the pattern of Trump's diplomacy to date."

Xi is a leader who knows how to get what he wants and manage powerful people - even billionaires. During his first five years as party chairman, Xi purged over one million officials in a widespread corruption campaign, many of them political rivals. And the campaign is soon expected to spread its net over China's corrupt business elite.

As the sole ruler of 1.4 billion people and the world's second-largest economy, it should be alarming that so much power has accumulated in Xi's hands.

President Trump expresses admiration for Xi's repressive prowess, extolling his "extraordinary elevation" and saying that his feeling toward the Chinese strongman is "an incredibly warm one."

Xi has worked his way to exerting control over China not seen in many decades. But unlike in the past, China today wants to be a "leading influencer" on the world stage. Without opponents, an independent judiciary and adhering to an oppressive model of social governance, President Xi can choose to wield this influence as he wishes. And it will definitely not be based on any model of liberal democracy.

"China's views of American superiority, the universality of Western values and the strength of democracy certainly have changed," Orville Schell, director of the Center on US-China Relations at the Asia Society in New York City, told DW.

"In the wake of the 19th Party Congress, Xi has now anointed 'socialism with Chinese characteristics' as superior to failing Western models of development," he said, referring to the title of Xi's political ideology.

Aside from the fanfare last week in Beijing, critical points remain unresolved. Economically, there is little the US can do to pressure China to change its internal market policies. But geopolitically, the stage is being set for tension as China's ambition to be a great power grows stronger.

One of President Xi's core goals is to expand China's global influence, both economically and geopolitically, in what he calls a "new era" for China. Xi said at the Party Congress that he plans for China to be a leading influence on the world stage by 2050 as a modern socialist "strong power."

And China is taking advantage of US inconsistency on the world stage. The current US political climate centering on isolationist, "America first" rhetoric, and the shift in policy toward Trump's unilateral brand of transactional diplomacy, contribute to China's goal of diminishing a multilateral, rules-based order in the Asia-Pacific region.

"The challenge with a transactional view of diplomacy is that to be successful, you need something to transact that makes the other side willing to make big deals. In the case of the Trump administration, that condition doesn't seem to be in place," Hirson told DW, adding that the Trump administration lacks a "strong strategy" to counter China.

"This will be a real challenge for the Trump administration, in which many cabinet members are sharply opposed on how the US should deal with China, and with a president who often seems to vacillate and rely on his gut sense when making decisions."

The Trump administration also has limited leverage on key issues like opening China's markets to US investment and doing more to contain North Korea. Going forward, political observers note that a tipping point may soon be reached where the US needs China more than the other way around.

Chinese leadership also understands that the US is a dominant force that will continue beyond Trump's presidency. Still, they currently see a unique opportunity to set the tone for the coming decades.

"China's ruling elite view Trump as a leader who is unconventional and unpredictable but can be successfully managed," said Hirson. "They see Trump as someone who came to office pledging aggressive moves against China, but took a more reasonable stance thanks to China's diplomatic efforts and Xi's skillful handling of Trump at Mar-a-Lago."

Hirson added that China was running the risk of being overconfident with Trump.

"While Trump clearly values his relationship with Xi, he could well turn to more combative policies toward China next year, particularly if he approaches mid-term elections in the US with a lack of legislative results," he said.

But with or without US support, China is heading in an outward-looking direction and is reaching out to the world, while the US is retracting.

Ambitious international projects and soft power initiatives like building ground routes for Chinese goods via the "One Belt, One Road" initiative, infrastructure development in Africa and investment agreements with the EU, increase China's options for global partnerships and lessen its dependence on the US.

And with the Chinese government's ability to intervene in supporting key industries, subsidize competition and give advantages to Chinese firms, US companies could find it harder to compete with China as its economy develops under Xi's "modernized socialism."

"It is unlikely that China will move to the extent that the Trump administration is demanding," said Hirson. "That sets the stage for tougher measures by the US down the road, and a more rocky relationship," said Hirson.