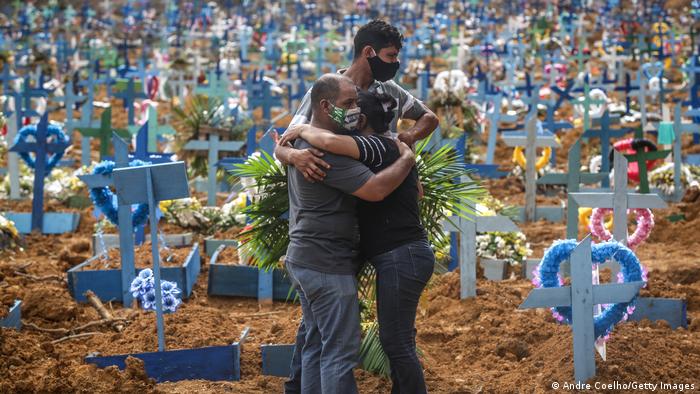 Humans have developed a multitude of death and mourning rites over the ages to help them grieve when they lose a loved one. But all over the world, the COVID-19 pandemic is wreaking havoc on how burials and funerals can be conducted.

The novel coronavirus has infected more than 2.5 million Brazilians as of late July — more than 1% of the population, according to official figures. As part of measures to avoid outbreaks back in March, the Health Ministry issued strict guidelines regarding funerals, banning wakes and open-casket viewings.

"Usually, bodies are kept in an open casket for one day," explained cultural anthropologist Andreia Vicente da Silva of Western Parana State University. "It's common for relatives and friends to attend a wake and share their suffering and stories, and even to speak with their late loved one. They might even touch the body."

If there are no forensic reasons preventing it, a body is supposed to be buried within 24 hours. 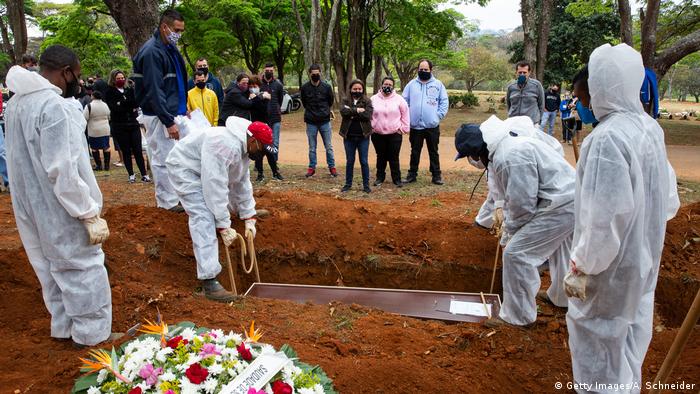 For Elaine Alves, a psychologist and grief counselor based in Sao Paolo, the timing of these rites is not important. What's vital is that they take place. "Seeing a body, acknowledging that a loved one is no longer reacting to words or contact, this all helps to understand that somebody is dead. It also helps the grieving process," she said.

But the pandemic has put an end to wakes for the moment, and funerals are taking place in accelerated fashion. If a person dies of COVID-19 in hospital, their body will be wrapped in a plastic body bag and put directly in a coffin. If they're lucky, relatives might be able to see the sealed coffin for a moment before it's put in the ground.

Much of this depends on how undertakers and cemeteries implement the governmental guidelines, explained Vicente da Silva, who has talked with many mourners as part of her research.

"Some of them told me that gravediggers were very considerate. Others said that they didn't even have time to say a prayer before the first shovelfuls of earth landed on the coffin. One woman said that her late husband had been disgraced," she said.

'Nobody gets used to death'

Brazil has one of the highest COVID-19 death rates in the world. According to official figures collected by Johns Hopkins University, more than 90,000 people have died as of July 30. The sheer number of bodies has seen municipalities forced to implement measures that would have been unthinkable just last year.

The northern city of Manaus even resorted to stacking coffins in mass graves, but stopped the practice after protests. The mass graves, however, have continued. In Sao Paulo, bodies are now being buried at night if the number of daily deaths surpasses 400. 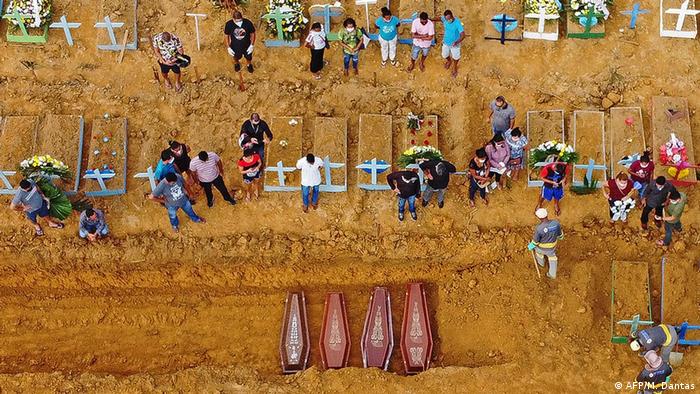 In Manaus, COVID-19 victims are being buried in mass graves

Even without the pandemic, Brazil has a high death rate. In the past decade, the country has witnessed some 50,000 murders every year: almost 240 homicides per million inhabitants. By comparison, there were fewer than 10 per million in the European Union.

The number of people who die in traffic accidents in Brazil is also four times higher than in the EU, and Brazilians are more likely to die of curable diseases because of their poor health care system. This is particularly true for Brazil's poorer population, which has also witnessed disproportionate cases of COVID-19.

But the fact that death seems to be more frequent does not make it any easier to deal with, said Alves. "Nobody gets used to death," she said. "Each death and form of grief is individual, especially when it comes to close relatives or friends."

"The death of another person is also so difficult to bear because it reminds us of our own mortality," added Vicente da Silva.

Faced with challenge, many Brazilians are using digital media to create new rites and ways of mourning during the pandemic. People have been communicating with isolated relatives via Skype, WhatsApp and other platforms, sometimes even saying goodbye to people on the brink of death.

"This preemptive grief before death significantly helps the mourning process afterward," said Alves. However, she also said that she expected a rise in psychological trauma, which can have a physiological impact and lead to heart disease, diabetes or other health issues.

"If someone has a predisposition for a certain illness, it might be triggered at this point," she said, adding that these problems are exacerbated by the fact that people are isolated because of the pandemic and unable to find solace in the social contact that is so important when somebody dies. Here too, however, the internet can help. For example: The traditional masses that usually take place seven and 30 days after a death are now frequently being conducted online.

Vicente da Silva said online collective commemoration, such as on Facebook or individual websites, could also help and even provide comfort to strangers.

"People who have died of COVID-19 can be seen as the victims of a collective trauma," she said. "This can create a feeling of identification with other mourners and help people to overcome their own pain."