Weeks after he told an interviewer that he, not Oliver Kahn, should be the Germany's top goalkeeper, Jens Lehmann got benched by his London club Arsenal for mistakes that led to the team's Champion's League exit. 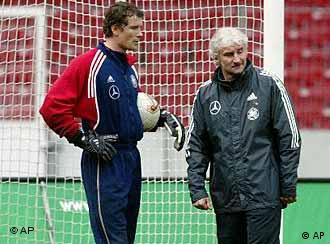 On the bench at Arsenal? Lehmann still has a place in Coach Rudi Völler's national team.

Two mistakes by Jens Lehmann in two crucial games against rival London club Chelsea in the past two weeks, was apparently one too many for Arsenal management, who are reportedly looking for a new keeper.

Lehmann, who observers say has otherwise played solidly in goal for Arsenal this season, came out too early to challenge a Chelsea striker, yielding 0-1 in the first game of the quarterfinal matchup. In the second game last Tuesday, Lehmann deflected a shot back in front of the goal, easy pickings for Chelsea's Frank Lampard to tie the game. Chelsea went on to win 2-1, sending Arsenal packing out of the tournament of Europe's top soccer clubs.

On Friday, the British tabloid The Sun reported that Arsenal coach Arsene Wenger was trying to sign another goalkeeper and bench Lehmann, 34.

"Wenger promptly decided that was the last straw for his accident-prone German," according to the Sun.

The reports came more than a month after Lehmann told an interviewer for Germany's kicker magazine that he was a better goalkeeper than Kahn, sparking a national debate and earning criticism from fans and players alike.

"My performances are more consistent," said Lehmann, after Kahn had made some unforced errors in a friendly match against Croatia. "Over the past year I have lost two games and made two mistakes. I can't really say that anybody else is better than I am."

Arsenal club officials are now likely to see that otherwise. Until his recent mistakes, Lehmann was in good standing. The only major acquisition by the top European team over the summer, from German club Borussia Dortmund, Lehmann had a solid season in goal for the high-flying club which is on track to finish first in England's Premier League.

Only his temper, a problem in the Bundesliga in the past, drew Lehmann negative press. He was recently fined 10,000 pounds (€15,151) after throwing a ball at another player following a dust-up in front of the goal. But his meticulous game preparation and billowing self-confidence have earned him respect in the Premier League.

Up until the recent games, that is.

His problems on the island are not likely to affect his standing on the national team. Head coach Rudi Völler recently gave Lehmann his first start in goal, during a friendly against Belgium. The 34-year-old goalie could also play against Romania.

The upcoming European Championships in Portugal in June, however, remain Kahn's turf.

A war of words between Germany's top two goalkeepers has now dragged in some of soccer's most important personalities. It all stems from national reserve keeper Jens Lehmann's comments on number one Oliver Kahn. (Feb. 20, 2004)