The selling of this year's tobacco harvest in Zimbabwe started this week. Farmers and government officials alike are hoping for a banner year but obstacles remain. 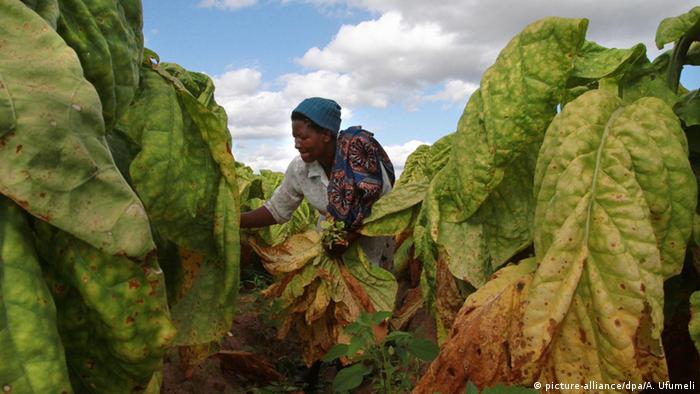 Tobacco farmers cheered after the new electronic auction system began the auction of raw tobacco this week in the capital Harare. Many in Zimbabwe hope that this year's harvest will help bolster the country's economy.

"Producers of tobacco are indeed our heroes. You are important to this economy. The foreign currency you produce is above $800 million (745 million euros) a year," said Reserve Bank of Zimbabwe Governor John Mangudya at the opening of the auction.

However, this optimism was soon replaced by frustration and anger among the farmers. One of them was Bernard Mudapakati from Bindura, about 100 kilometers (60 miles) north of Harare. Besides being unhappy with the starting price of less than $5 a kilo, he fears the price might drop further.

"This is because the electronic system is alien to us farmers. We are seeing it for the first time. We were never told about it," said Mudapakati. "As farmers, we have been asked to stand away from our tobacco so that we do not disturb buyers," he added.

Zimbabwe officials have projected that the country will produce 205 million kilograms (450 million pounds) of tobacco this year, three million more than what the country harvested in 2016. Most farmers fear the electronic system will suppress tobacco prices as they were not aware of how it works. The initial price of $6 a kilo which the system had set got no bidders angering farmer Faro Muza.

"Initially we thought the system was there to quicken the process, but it has stopped. But time is ticking away. We want to go back and get some more tobacco or it will be destroyed by the rains. I think the old manual system was better. I would bring it back," said Muza.

Farmer Elizabeth Antonio said their concerns were not only about the delays at the auction floor, which is run by the government, but also about the depressed price they get for their product.

"After this year's incessant rains, roads have been damaged. We struggled to get here. We used ox-drawn carts in some cases until we got to where trucks could pick up our tobacco," she said.

Joseph Made, Zimbabwe's agriculture minister, is happy with the output of the Zimbabwean farmers, but the farmers are not happy with both the price and the delays they encountered.

However, the minister said he sympathized with them. "I am very happy with the starting price so far. We have not gotten yet to the prime quality, so it is a good start for the farmers," he said.

Zimbabwe has begun issuing a surrogate currency - $2 and $5 denomination 'bond notes' - in a bid to ease a cash shortage. The move has prompted fears of a return to hyperinflation. (28.11.2016)

Riot police in Zimbabwe have used a water cannon and batons to disperse a protest by around 1,000 demonstrators gathered in the capital. The unrest is a sign of growing opposition to 92-year-old President Robert Mugabe. (03.08.2016)