Emergency workers are trying to save 18 miners trapped in a Turkish coal mine after their shaft was engulfed by water. Turkish officials say their chances of survival are slim. 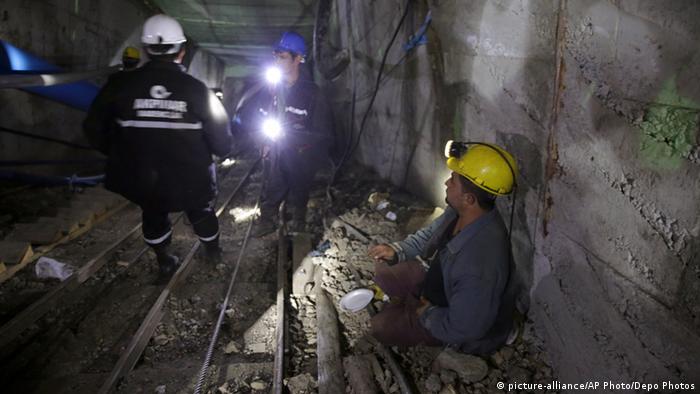 On Wednesday evening, Turkish Energy Minister Taner Yildiz said that poor visibility had hindered a rescue team from entering a flooded mine farther than a few meters where 18 miners are believed to be trapped.

"Time is working against us. With every passing minute, our hopes are reduced," he said in comments broadcast by Turkish television.

Yildiz added that there had been no contact with any of the trapped miners, while anxious family members were waiting nearby.

The previous day, a broken pipe flooded a mine shaft more than 300 meters (984 feet) underground in a privately-owned coal mine in the southern Turkish province of Karaman. At the time of the accident, at least 34 workers were underground, but 16 of them managed to escape unharmed.

The accident on Tuesday reignited concerns about workplace safety in Turkey, where a coal mine fire in May claimed more than 300 lives in the western town of Soma.

President Recep Tayyip Erdogan traveled to the province of Karaman on Wednesday after having canceled Republic Day celebrations at his new presidential palace.

After visiting the mine, the Turkish president emphasized that the government had tightened regulations after the deadly accident in May, but noted that not all mining companies had complied with the new rules.

"This brought a very different legal framework for the facilities under which miners should work. Some employers digested this, some did not," Erdogan said.

Prime Minister Ahmet Davutoglu, who also visited the scene, admitted that the mining industry in Turkey had to improve its standards.

"In many of our mines, the proper technological infrastructure is lacking. Rapid modernization is needed," he said.

According to the International Labor Organization (ILO), Turkey is the country with the highest rate of workplace fatalities in Europe.

Families struggle with aftermath of Soma

Shock and anger have gripped families across Turkey following the deaths of 301 workers at a mine in the country's west. The tragedy has overwhelmed the Girgins, who lost Muhammed, a son, brother and soon-to-be father. (22.05.2014)