Voters in Hong Kong have been voting in an unofficial referendum on democratic reform. The poll, which asks if people want to directly elect their head of local government, has been condemned as illegal by Beijing. 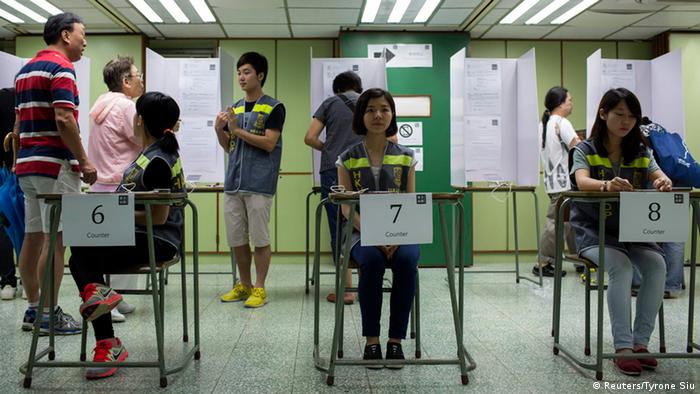 Hong Kong voters headed for the poll booths on Sunday to cast ballots in an unofficial referendum about whether they should be able directly elect the territory's chief executive.

Even before physical voting began, more than 603,000 votes had already been cast online in the preceding two days. In all, about 3.5 million people were registered to vote in the last official elections, in 2012.

Voters who preferred to cast their ballots in person braved the rain to visit one of the 15 polling centers set up around the city.

"People were lining up to vote. It shows that Hong Kong people have a strong desire for genuine democracy," said Benny Tai, one of the founders of the Occupy Central movement, which organized the ballot.

Officials in both Beijing and Hong Kong have dismissed the poll as illegal. The independently organized referendum has no legal status whatsoever, but organizers hope that a high turnout will bolster their case.

"If the government decided to ignore people's call, indeed there may be a possibility of more radical action. I hope the government does not push Hong Kong people to that point," Tai said.

Voters at one polling station were heckled by pro-Beijing demonstrators. The booths were opened after an online referendum was hit by an apparent cyberattack. The vote was also extended until June 29.

The referendum comes a week after a draft bill was released by Beijing that reasserted its authority over the territory, angering many Hong Kong residents.

Beijing has agreed to a vote in 2017 for the city's chief executive, but only with candidates that have first been approved by a nominating committee. Activists - who say that such candidates could be no more then puppets of Beijing - want it to be possible for the public to make nominations.

The former British colony returned to Chinese sovereignty in 1997, when it was promised a "one country, two systems" arrangement that conferred greater freedoms on Hong Kong citizens. The deal included a promise of democratic reform, at an unspecified date.