A referendum for local government voting reform has been extended after organizers reported difficulties with their online voting system. Beijing and Hong Kong officials have called the vote illegal. 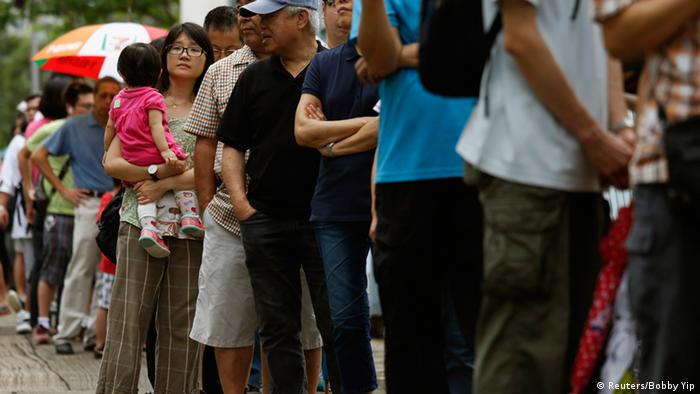 Voters in Hong Kong will have a further week to cast their votes either online or at the polling booth in a referendum on democratic reform that was due to finish on Sunday.

Although the unofficial referendum has no legal force, it is offering a choice of three options on how the 2017 chief executive ballot should be carried out. Each option would allow voters to choose candidates for the top job. China's State Council called the vote "illegal and invalid."

The current system allows a 1,200 member committee to choose the former British colony's leader. From 2017, Beijing has said Hong Kong voters will be able to choose their own leader, from a list of candidates vetted by a Beijing associated committee.

There are 3.5 million registered voters in Hong Kong, out of a total population of 7.2 million.

By Sunday night in Hong Kong, nearly 700,000 ballots had been cast since voting started on Friday. Some 440,000 votes were made through a smartphone application, 200,000 more were cast online and about 48,000 people voted at 15 polling stations, which organizers were operating on two successive Sundays.

There were major problems with online voting and the site was inaccessible for long periods over the first three days. Organizers of the referendum and the "PopVote" website built by the University of Hong Kong and Hong Kong Polytechnic University claimed the problems were caused by a cyberattack which could only have been carried out by Beijing.

One of the founders of the Occupy Central with Love and Peace pro-democracy movement - which organized the ballot - Benny Tai, said "People were lining up to vote. It shows that Hong Kong people have a strong desire for genuine democracy."

Occupy Central was launched by local activists. It has threatened to paralyze the city's financial district with thousands of protesters at the end of the year if officials do not produce a proposal they find acceptable. The group is planning a sit-in similar to the Occupy protests held in New York and London three years ago to press their case for reform.