Hong Kong prepares for China′s National Day amid protests | Asia| An in-depth look at news from across the continent | DW | 30.09.2019

As China's National Day approaches, Hong Kong's pro-democracy demonstrators are hoping to cast a shadow over celebrations. The city's authorities have rejected an appeal for a major protest march on National Day. 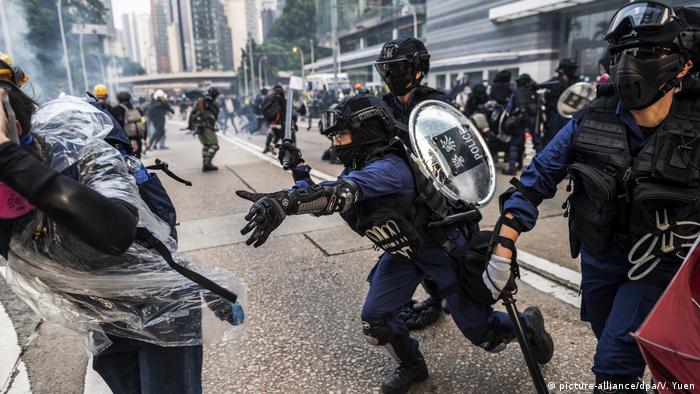 Hong Kong's government on Monday cautiously prepared for Chinese National Day celebrations on October 1, following a weekend of violent clashes between police and protesters that saw the deployment of tear gas and dozens of arrests.

Due to the months-long unrest that has engulfed the city, the government has decided to tone down its annual celebration, moving the traditional flag-raising ceremony indoors and cancelling the signature fireworks.

The 2019 National Day marks seven decades since the founding of the People's Republic of China.

According to Hong Kong's South China Morning Post newspaper, guests attending the National Day cocktail reception have been told the event will be held inside at the Hong Kong Convention and Exhibition Center.

This marks the second major anniversary that has been forced to move indoors after the government held the flag-raising ceremony for the handover anniversary at the Golden Bauhinia Square on July 1.

Despite a more low-key celebration, the Hong Kong government has planned a series of activities to mark the 70th anniversary, including an evening light display on the city's famous Victoria harborfront and the release of commemorative stamps.

Hong Kong authorities on Monday rejected an appeal for a major pro-democracy protest scheduled for October 1.

The Civil Human Rights Front (CHRF), which has organized several major rallies in recent months, said an appeals board upheld the police ban on Tuesday's march in the city center.

CHRF had earlier told DW that it would cancel the rally if it did not receive approval from the police. Protesters in Hong Kong have been known to turn up in massive numbers even when a rally is banned by police, and in several cases, these unauthorized rallies ended with violent clashes and mass arrests.

Wong Yik-Mo, the vice convenor of CHRF, told DW that since many citizens are not ready to take part in civil disobedience, they want to facilitate a legal and peaceful protest that allows people to voice their opinions to the government. "We want to make sure that our rallies are legal, so more people will be willing to take to the streets," Wong said.

Over the weekend, "anti-totalitarianism" protests to mark the fifth aniversary of Hong Kong's Umbrella Movement were also held in several cities around the world.

"We want to use the worldwide rallies to show the Hong Kong and Chinese governments that a lot of people are dissatisfied by the way they have handled protests in Hong Kong over the last three months," said Number 4, the organizer of the rally in Sydney. "We also want to remind people around the world that this is not just a fight for Hong Kong, and we hope they will join us on the streets," they added.

Some observers are worried that recent trends have made the protests more violent and confrontational.

Ma Ngok, an associate professor at the Chinese University of Hong Kong, told DW that as police step up arrests and beatings during protests, people have become scared of demonstrating. "Even though Chief Executive Carrie Lam has talked about initiating a dialogue with citizens, Hong Kong police's actions are in stark contrast to the government's rhetoric of facilitating a dialogue," Ma said.

"As they use weapons to disperse protesters attending legal and peaceful rallies, I think it's obvious that the police and the government are desperately trying to crack down on protesters," Wong explained.

Ma said he thinks this violence is the result of Hong Kong police's inability to enforce order in the city, and it is clear that the Hong Kong people have lost confidence in the police's ability to administer justice impartially.

"The belief that police can't enforce rule of law impartially has prompted some protesters to take matters into their own hands, which sometimes resulted in the violent actions we have seen over the last few weeks," Ma said.

'The so-called dialogue is a farce'

During last week's community dialogue in Hong Kong, almost half of the participants who got the chance to ask questions confronted Lam over the issue of police brutality. They called for the launch of an independent inquiry into the use of force by police, but Lam rejected their proposal, reiterating that the Independent Police Complaints Council has already been investigating relevant matters.

"Police have become a political tool and there is no mechanism to monitor their operations," said one woman attending the dialogue. "The IPCC is only a toothless tiger."

Ma said that while the government has repeatedly emphasized its willingness to initiate a dialogue with citizens, he doesn't sense any genuine intent from the government to talk to Hong Kong people.

"I think the so-called dialogue is a farce, because the government continues to prosecute protesters while refusing to meet with opposition representatives," Ma told DW. "As for the proposed policies, I think the government is trying to use them to divert the public's attention from protesters' main demands."

With or without permission from police, Ma expected the rally on October 1 to have a sizable turnout. "Since permission from the police no longer guarantees protesters' basic safety, I think many people would come out regardless of the legality of the event," Ma said. "And if the government can't generate any meaningful responses to protesters' political demands, I think the street protests and confrontations will continue for a while."

Hong Kongers have taken to the streets as part of a coordinated day of global protests aimed at casting a shadow over communist China's upcoming 70th birthday. Rallies were also held in Sydney and Taipei. (29.09.2019)