Entrepreneur Jimmy Lai is the highest profile figure to be arrested under Hong Kong's new security law. After leaving detention, Lai was met by dozens of supporters holding copies of his tabloid Apple Daily. 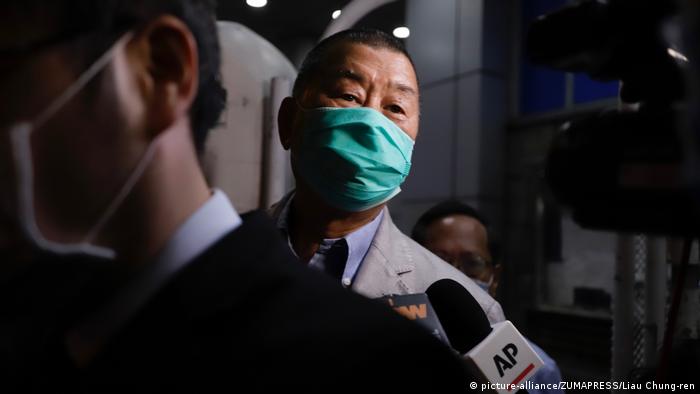 Lai, founder of media company Next Digital and the Apple Daily tabloid newspaper it publishes, was swarmed by dozens supporters as he left a police station. Some held up copies of the newspaper and shouted "support Apple Daily until the end."

The South China Morning Post newspaper reported that the 71-year-old entrepreneur had to pay the equivalent of $37,500 (€31,900) on top of an additional security deposit.

An outspoken supporter of Hong Kong's pro-democracy movement, Lai was one of 10 China critics arrested Monday on suspicion of breaking the city's new security law. It was the highest profile arrest since the law came into effect last month.

The law punishes anything China considers subversion, secession, terrorism and collusion with foreign forces with up to life in prison. China imposed the law after a year of protests against Beijing's tightening grip on the semi-autonomous city.

His arrest prompted Apple Daily to print 500,000 copies of it's Tuesday edition with news of the arrest. The paper showed Lai in handcuffs with the headline "Apple will fight on."

A new security rule for Hong Kong has been welcomed by businesses focused on China, but the longer-term damage to Hong Kong's autonomy and business environment could prove serious.