A court in Hong Kong has sentenced Joshua Wong to three months in prison for playing a "leading role" in pro-democracy demonstrations in 2014. It's the second time the 21-year-old has been jailed. 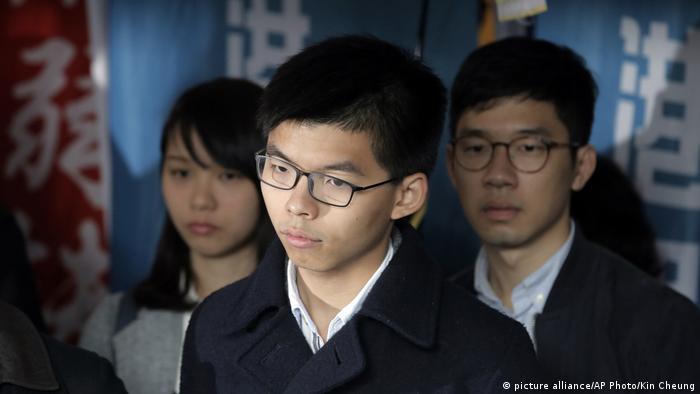 Hong Kong's High Court on Wednesday jailed Joshua Wong for contempt after he pleaded guilty to flouting a 2014 court order to leave a protest camp that blocked a main road.

Another activist, Raphael Wong, was handed a four-month sentence over the same incident. More than a dozen other defendants received suspended sentences.

In the ruling, Chief Justice Andrew Chan said although Wong had only been at the protest camp for a short time, his involvement in obstructing the clearance operation was "deep and extensive."

"He played a leading role on that day," the judge said. "In view of his overall involvement, I am of the view that the only appropriate punishment for Mr. Wong will be one of immediate imprisonment."

The "Umbrella Movement" brought parts of Hong Kong to a standstill for more than two months. Tens of thousands of mostly student activists called on Beijing to allow fully free elections of future leaders in the semiautonomous Chinese city.

Wong, who was just 18 in 2014, is currently seeking to overturn a six-month sentence  for a separate protest action. He started serving that sentence in August but was granted bail pending an appeal verdict. Hong Kong's highest court, which heard the appeal on Tuesday, is due to announce its decision at a later date.

Hong Kong has been governed by a "one country, two systems" agreement since 1997 when Britain handed the territory back to China.

Under the deal, citizens have the right to freedom of speech and a partially directly elected parliament, as well as an independent judiciary.

Hong Kong student leader Joshua Wong has been convicted of participating in a protest that led to the city's mass pro-democracy rallies in September 2014. The 19-year-old has slammed his case as political persecution. (21.07.2016)