Hong Kong independence activist Edward Leung has been sent to prison for taking part in a violent clash with police in 2016. He was among a generation of activists supporting full independence from China. 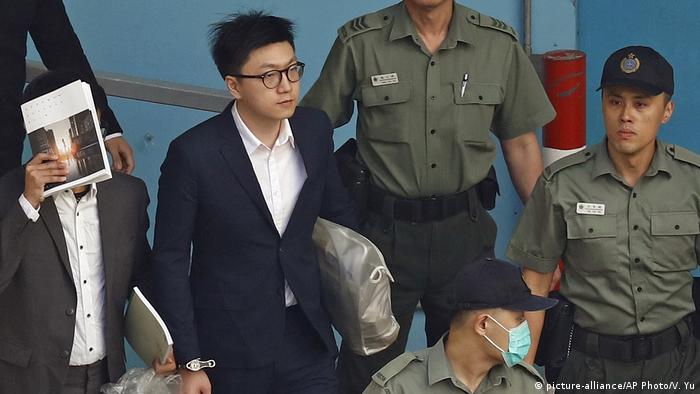 The 27-year-old was already in custody after pleading guilty in January to a separate charge of assaulting a police officer during the riot. He was sentenced to one year in prison for the assault, with the two terms to be served concurrently.

The 2016 protest began as a rally in the city's Mong Kok shopping district to protect unregistered street vendors from health inspectors but quickly escalated into an outpouring of anger against authorities in mainland China. It later became known as the "Fishball Revolution" after one of Hong Kong's best-loved street snacks.

Leung, who pleaded not guilty, said he wanted to "protect Hong Kong culture" and had no intention of rioting. Local media reported he had been inspired by the pro-democracy slogan "Without resistance, how is there change?" Handing down his prison sentence, Judge Anthea Pang described Leung's actions as "wanton and vicious."

Demonstrators had hurled bricks and set rubbish on fire in some of the city's worst protest violence in decades. Leading the clashes were young "localists," which refers to radical groups promoting independence from Beijing. Those groups grew out of massive pro-democracy rallies in 2014, which tried but failed to win concessions from Beijing on political reform.

Pro-democracy activist Joshua Wong, who has campaigned for Hong Kong's self-determination but not independence, described Leung's sentence as "the harshest imposed on an opposition activist since 1997."

Hong Kong's last British governor, Chris Patten, slammed Leung's sentence. Referring to legislation passed during the 2014 Umbrella Movement, he said, "It is disappointing to see that the legislation is now being used politically to place extreme sentences on the pan-democrats and other activists."

A police representative denied that the case amounted to political persecution. "The sentence reflects the gravity of the offence," said the chief inspector of the Organized Crime and Triad Bureau, Tse Tsz-kwan.

The patchy weather could not deter the congregation of thousands of people in Hong Kong to demonstrate for more democracy. The organizers estimate more than half a million people took part in the protests. (01.07.2014)